AutoTonic is a ‘Modal Note Transposing’ tool which promises to shake up your MIDI and virtual instrument setup. It offers a flexible and fresh new way to approach note and scale mapping that is completely independent of any virtual instrument or engine. Imagine being able to utilize the diatonic C notes of a piano keyboard (the white notes) to play just about any mode or scale you can imagine. There are a few virtual instruments that offer a limited version of this capability, but they are usually tied into more ethnic engines and sound libraries for utilizing non-traditional scales. AutoTonic is completely ‘instrument agnostic’ and allows you to utilize pre-built scales, or create your own.

AutoTonic is a standalone app. You run it, and it cleverly allows you to ‘intercept’ incoming MIDI from any available source. You can then route AutoTonic’s output wherever you’d like. AutoTonic provides its own virtual output, but you can also output MIDI to a hardware interface, allowing you to use AutoTonic as a translator of sorts, with just about any synth or keyboard in your studio.

Here’s how it works. You tell AutoTonic where the MIDI is coming from, then you tell it where you’d like it to go. From there, you simply pick or create your scale, and it’s off to the races! Want to play symmetrical diminished scales in any key without having to get it under your fingers? AutoTonic can do it. Need to instantly shift tonalities from Gb Lydian to Eb Harmonic Minor? AutoTonic will handle it without missing a beat. 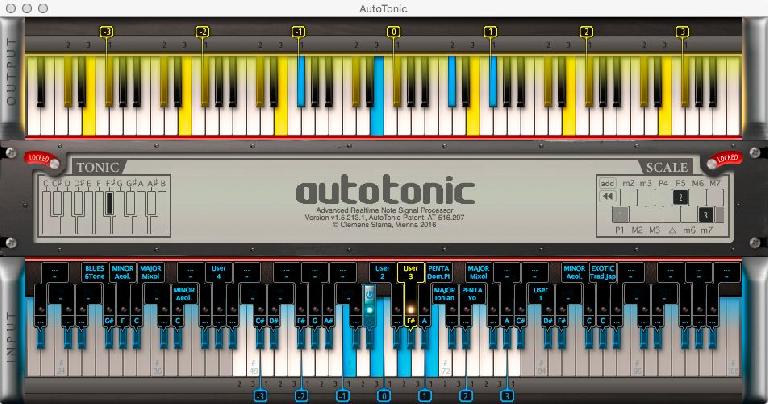 Set your output notes to match any scale you want.

When I first came across AutoTonic, I was a little wary as I tend to be a little ‘old school’ in the way I approach piano playing. I’d rather learn the mode I need to learn and just get it under my fingers. AutoTonic’s key switching capabilities, however, take it way beyond a simple ‘make a tough mode easier’ fix. The ability to have a riff actively playing under your fingers, then use your other hand to activate a different tonal center or harmonic center with a simple keyswitch is mind-blowingly creative. I can’t tell you how much time I spent coming up with a cool riff and just blasting through various keys and tonalities until I really nailed down where it sounded best. Contrary to what I expected, I didn’t use AutoTonic as a crutch, I used it to express my theory knowledge even faster than my fingers could possibly do on the fly; and I had a blast doing it.

Preset scales of every mode, harmonic content, genre, and culture you could want. An intelligent scale management system. Intuitive key switches. Super simple routing. These are all cornerstones of AutoTonic. AutoTonic takes a simple concept and gives you endless possibilities in the way you execute it. It’s fun, it forces you to think about theory and scales, it allows you to execute ideas before you have them ‘fleshed out’ under your hands, and it even allows you to mimic the layout and common riffs of other instruments more authentically on a MIDI keyboard. I had a blast with AutoTonic, and I’m sure you will too.

Cons: I wish the window were user-resizable. Dream It. Do It.
Do you want to learn Creating Moods and Styles?
Yes, I want to learn!
No Thanks, I just want to read the article.
Feedback
How are we doing?
We'd love your thoughts, feedback and questions regarding our new site. All feedback is appreciated!
We do not respond to this form! If you need support, please visit our support page.
Thank you for your input!
Your message has been successfully sent
Course Advisor
Don't Know Where To Start?
Ask A Course Advisor