I recently come across a cool library from Aviram Dayan Productions and DreaMelodic Music called ‘Aviram Arabic Strings’ and felt like it warranted an in-depth review. Arabic Strings contain samples from Aviram’s 6 years of collecting recordings with professional Arabic musicians in Israel. His approach to DIY sampling in this environment has produced authentic sounding results. Aviram combined his knowedge of sampling and musical expertise to slowly build and sculpt this particular library of world string sounds. The instruments sampled include Classical and Baroque Violins, Bass and Cello, Modern and electric Violins, Fiddle and even samples from Korg and Yamaha keyboards. All these textures combine to create Aviram’s full, clean sound with careful attention given to traditional Arabic phrases and articulations. 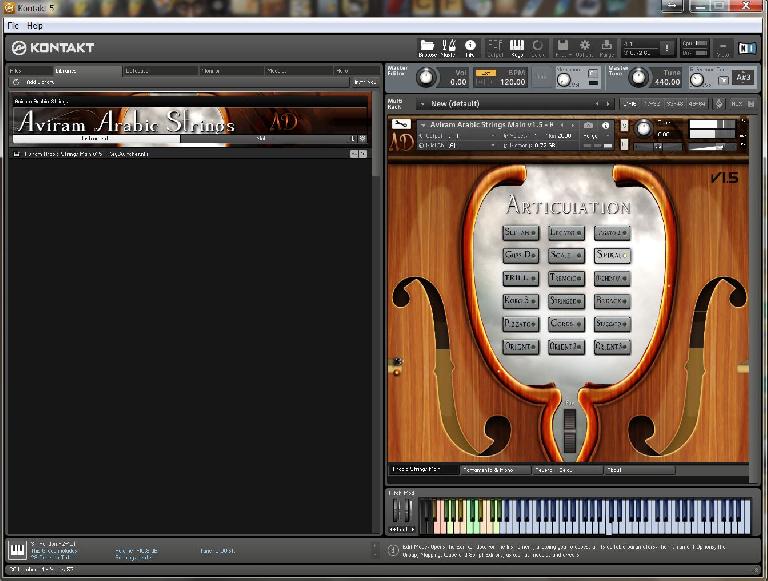 Arabic Strings comes with 3 GB of sample content including 9800 sounds in all for users with Kontakt player V5.4.1 and higher. Both Windows and Mac systems are supported. There are two main instruments: Aviram Arabic Strings Main V1.5 (Keyswitches) and a multi version ‘Aviram Arabic Strings Main V1.5 (Interval Multi Keyswitches). Another bonus included with Arabic Strings is a MIDI folder with typical Arabic phrases, licks, grooves and styles to get you started with this specific genre. The audio examples provided will give you an idea of what you are working with and then you can tailor the parts to your compositions. This is a very generous addition to the library. 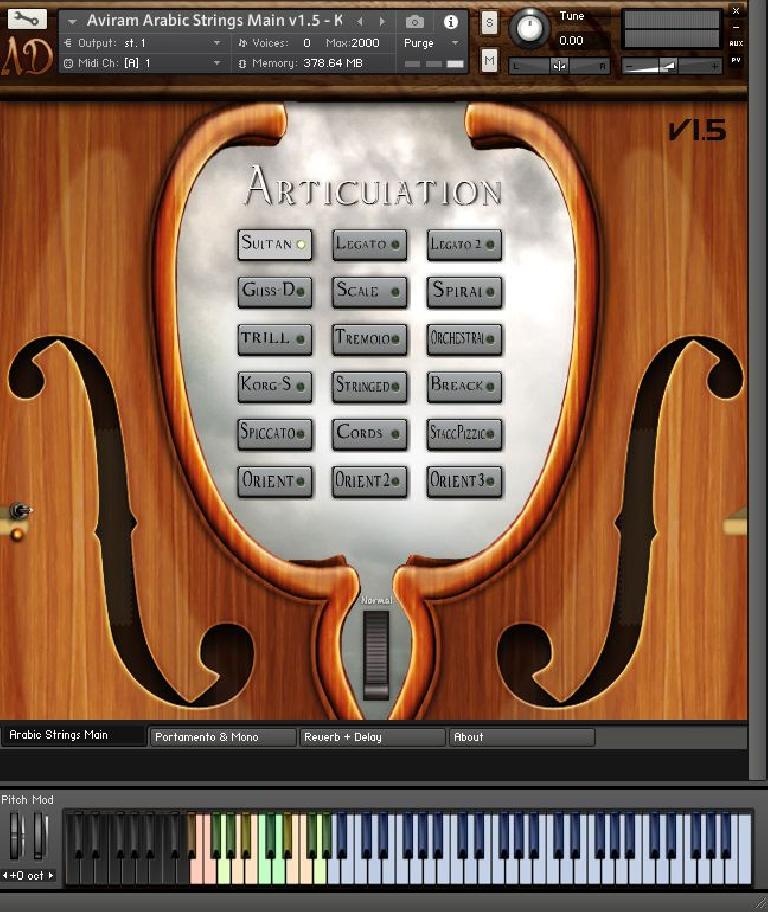 Arabic Strings has a wide variety of characteristic articulations, easily accessible in the Kontakt interface or in the programmed Keyswitches to the left of the playable range. Some of the articulation patches contain things you might expect from a string library like legatos, staccatos, trills and tremolo. But there are other very interesting runs, licks and textures characteristic of Arabic styles contained in some of the other articulations provided. In particular the 3 ‘Orient’ articulation styles contain layered string turns, trills and falling phrases I’ve definitely heard in this type of classical music. They have nice, strong attacks and their own unique timbre based on the developer’s recording and layering work. The sound is clean but also has some grit to it, which is very welcome. It’s important to note that Arabic Strings is not trying to be a Spitfire or Vienna library, but appeal to composer who wants a unique character with their string sound while also accessing a particular ethnic style.

Each Articulation Patch has three layers of different phrases and articulations easily accessible by the Modwheel. There are 3 playable ranges depending on your Modwheel selection. I enjoyed how quick it is to move between phrases for quick composing and the way they are grouped together is very smart. Between the bank of keyswitches to the left of the playable range and the modwheel, Aviram makes composing with Arabic Strings a wonderful experience. The modwheel appears on each page showing the three different setting as you access them as, ‘Normal,’  ‘Fun’ and ‘Game.’ 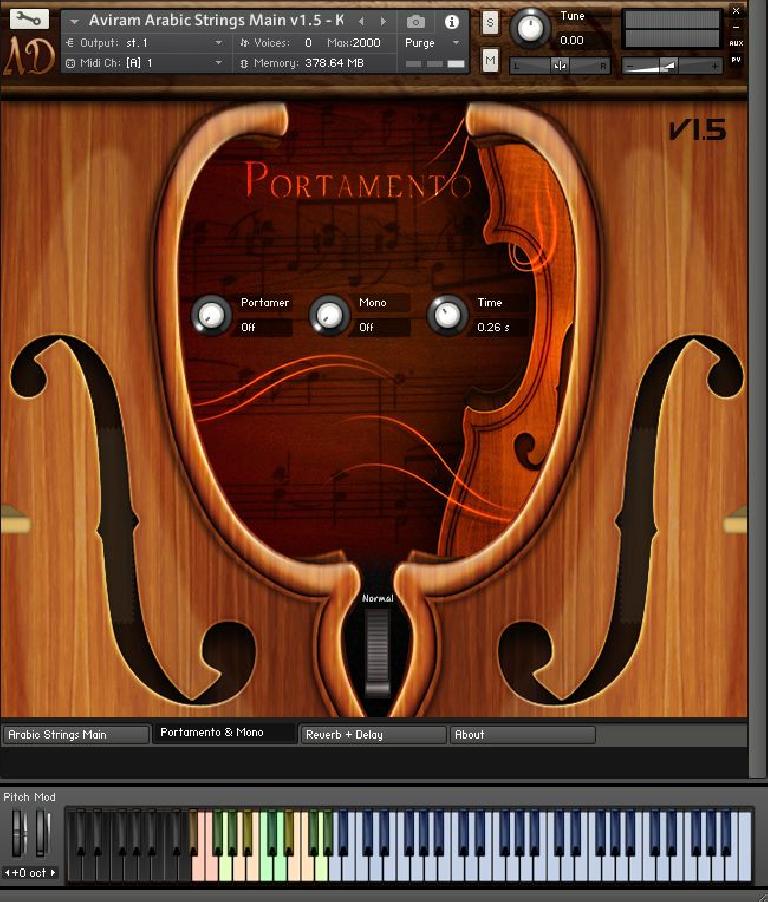 The portamento control contains 3 settings: on, off and auto and the mono setting has on, off, legato and offset options. The portamento time knob is also handy for setting the portamento glide between notes. These pitch glides are also characteristic of the Arabic style. It’s nice to see this included as a separate window here. This section will see expanded controls and updates in Version 2. 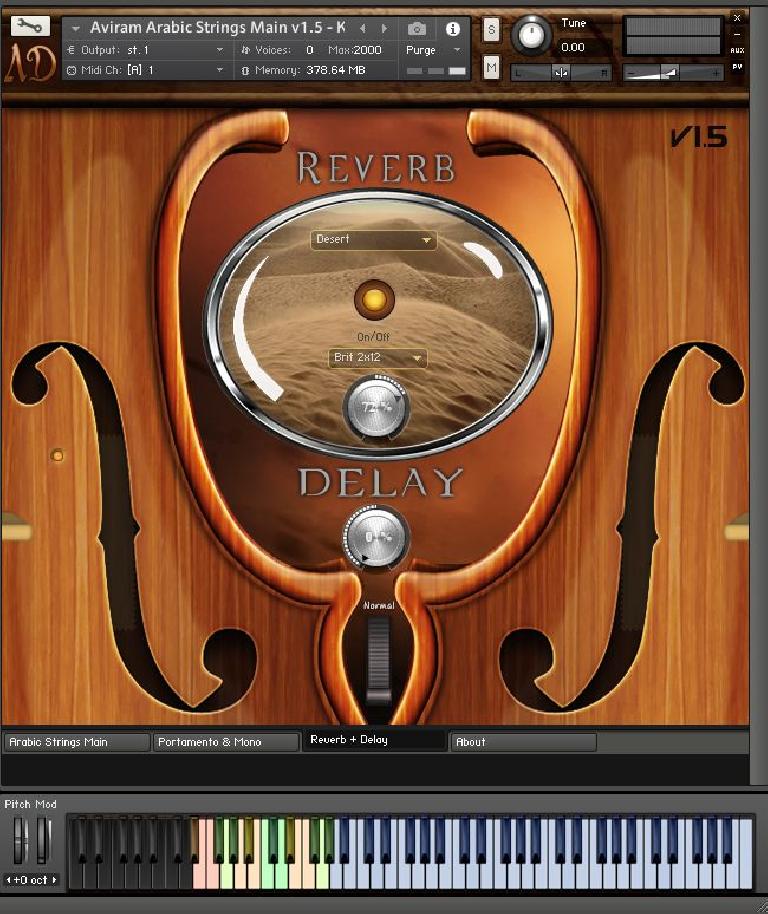 The built-in reverb and delay settings window allow composers quick access to creating space with the sound. There are a bunch of environments that include Halls, Rooms, Plate, Open Air and Desert. Each environment has pre-programmed settings to choose from. It’s worth spending some time here to get to know each environment. A wet/dry knob is included for both Reverb and Delay.

This library is a constant work in progress and Aviram has just released a 2.0 update. Some of the features in the new version include:

This is a well-done string library by a very talented musician, composer and programmer. I highly recommend checking it out for those of you who like to use Arabic string flavors in your compositions. I see a wide variety of applications for these sounds and textures. Plus, you will be supporting an independent developer and artist. I recommend watching the product videos and tutorials in get an overall sense of this library’s unique character.