All Articles Review
Review: Fabfilter Pro-DS
Hollin Jones on Fri, November 2nd 0 comments
Language
Sibilance can be a major problem when recording vocals, regardless of your studio setup. Hollin Jones puts Fabfilter's Pro-DS de-esser to the test on some suitably hissy sounds in this review.

I've been a fan of Fabfilter's ever-growing range of plug-ins for some time now. Not just thanks to their great sound but also their usability and clever design, which in eschewing any kind of skeuomorphic elements (by which I mean not trying to look like a piece of rack equipment with bolts and LEDs) actually makes complex processing tasks easier to understand. It's not just an aesthetic thing, it's that Fabfilter's stuff feels slick, well designed and responsive.

Pro-DS is the latest addition to the Fabfilter stable and it's an intelligent de-esser. Sibilance can be a problem with any recording, even if you're using great mics and popshields, and more so if your setup is less than stellar. De-essing is the process of selectively compressing a very narrow range of high frequency to try to lessen the 's' sounds in a recording when they get too hissy.

Pro-DS comes in 32 and 64-bit versions for Mac and PC and in all major plug-in formats. The most common way to use it is on a single source, typically a vocal, and to do this you can put it into Single Vocal mode. Use the Threshold dial to set the level at which de-essing kicks in, and the Range dial to scale the detected gain reduction. Between the two you can control where de-essing starts to happen and by how much. To make this easier to get to grips with, there's an Audition Sidechain button that lets you hear just the signal that is being attenuated. There's also a low and high pass filter section where you can choose the frequency range on which de-essing will trigger and an Audition Triggering button that helps to choose a Threshold level and lookahead time.

The plug-in can be switched to use Wide Band, better for single vocals, and Split Band, better for de-essing whole mixes. In the latter case, you would also switch to Allround mode, where the plug-in is better able to work on a more complex soundscape. Interestingly, there's a Stereo Link control, where you can make the processing work on centered vocals or on both sides of a stereo image, or a variable amount somewhere between the two. 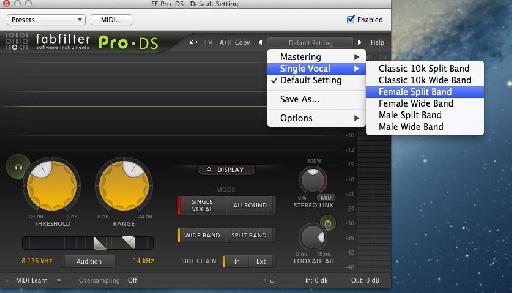 You can choose between Wide Band or Split Band.

The onboard display gives excellent feedback both about levels and the amount of gain reduction being done, and there are of course some handy presets to get you up and running, plus Fabfilter's peerless tooltip system, MIDI Learn, up to 4x oversampling and A/B of processing. 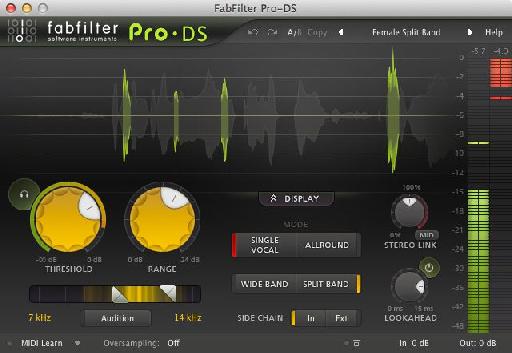 Pro-DS goes far beyond the basic de-esser you may have got with your DAW, and offers advanced but easy to use de-essing with excellent auditioning capabilities. Having several modes makes it easy to switch between working on vocals and the altogether more difficult working with whole mixes, but overall, results are very good. At $189, it may not quite be an impulse purchase, but it's the only de-esser you will ever need and there's a 30-day free trial available so there's no excuse not to road test it and see if it can help to tame your sibilant sounds.