All Articles Review
Review: Output Exhale â€" Bend & Twist Vocals Like Never Before
Hollin Jones on Tue, November 10th 0 comments
Language
Output's REV and Signal, were both huge hits for modern music producers. In this world-first review, we got hands on with Exhaleâ€"that's a unique take on vocal production and manipulation.

Output has made a name for itself by developing some truly unique Kontakt-based virtual instruments like Rev, Signal and X-Loops. The underlying theme to the company’s products has been complex, futuristic sounds and atmospheres. They’re not meant to sound like anything else, and they don’t. This philosophy is very much apparent in the latest member of the Output family, Exhale. Billed as a “Vocal Engine”, it’s not like anything you will have come across before.

Recreating voices in a virtual instrument has always been something of a hit-and-miss affair. The biggest problem if you’re trying to create a “real” vocalist or a choir in software is that the human voice is so infinitely detailed and nuanced, not to mention versatile, that it’s practically impossible to do. Samples are fine but limited by the words or sounds they contain, and purely synthesized speech often fails to capture the realism required.

A New Take on Vocals

What Output has done here is very decidedly not try to give you a soul diva vocal for your DAW. Instead, a combination of sampling, synthesis and effects are used to create a completely new kind of instrument. “Vocal Engine” is an accurate description, with real sampled voices providing the building blocks of sound, and a huge amount of other tools transforming the samples into new and often unrecognizable end products. It’s hyper-modern, experimental and is more about using voices as instruments than anything else. It is quite possible to strip patches back to a more natural choral or vocal sound, but that’s not the real focus of what’s going on here. It was born of feedback from musicians who complained that there was no way to get the kinds of vocal sounds and effects required by modern scores, EDM and sound design, in software form.

Running in Kontakt, Exhale’s library uses around 9 GB of disk space, and this is made up of samples of real singers captured by top producers through analogue and vintage gear, tape machines, vocoders and more. The main interface screen lets you choose from the 500 presets and these can be quickly filtered using tags like Cinematic, One-Shot, Pure and so on. There are three main categories of sounds. Notes allow for chromatic playing on a MIDI keyboard, Loops play over and over and Slices spread the parts of a sound across several keys. Lit notes in Kontakt show you which notes are available for any given patch. 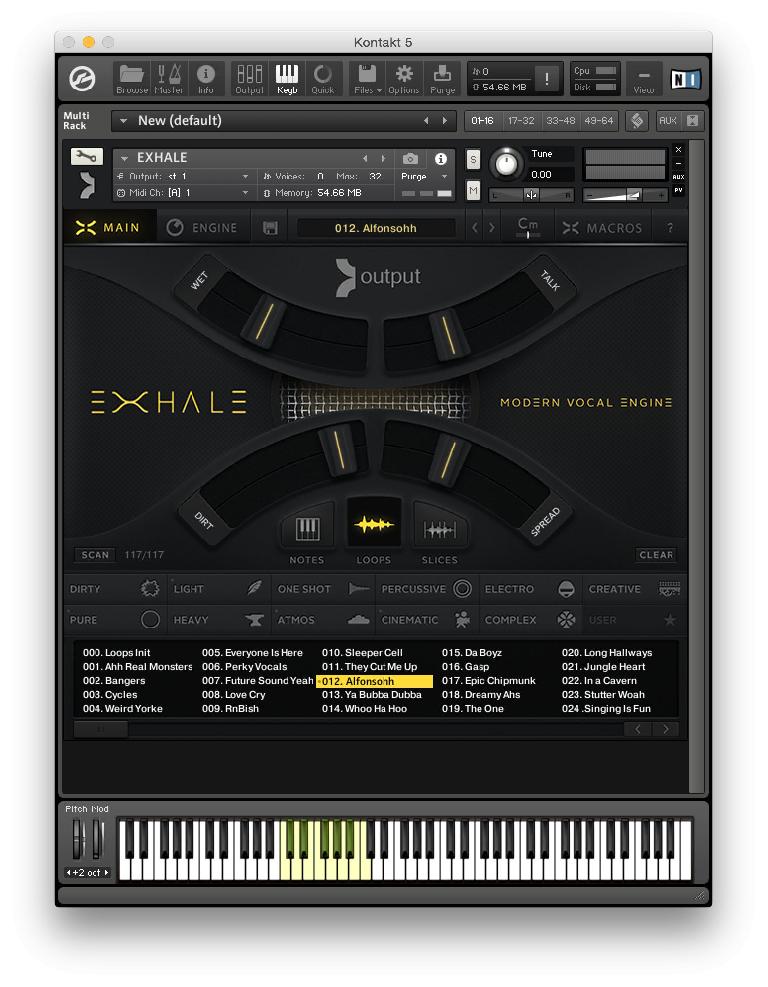 Your first reaction to loading up any preset is likely to be surprise. If you’re expecting standard workstation-style choirs, you’re in the wrong place.  Actually there are quite a few choirs, but they’re not the slightly plastic sounding ones you might be used to. The main screen shows four Macro sliders that vary by preset and these can be reassigned to affect anything you like. More or less any parameter of a patch can be quickly edited using these sliders: rhythm, reverb, tone and filter to give just a few examples. Output has pre-assigned what it thinks are the most useful but these are easy to alter. 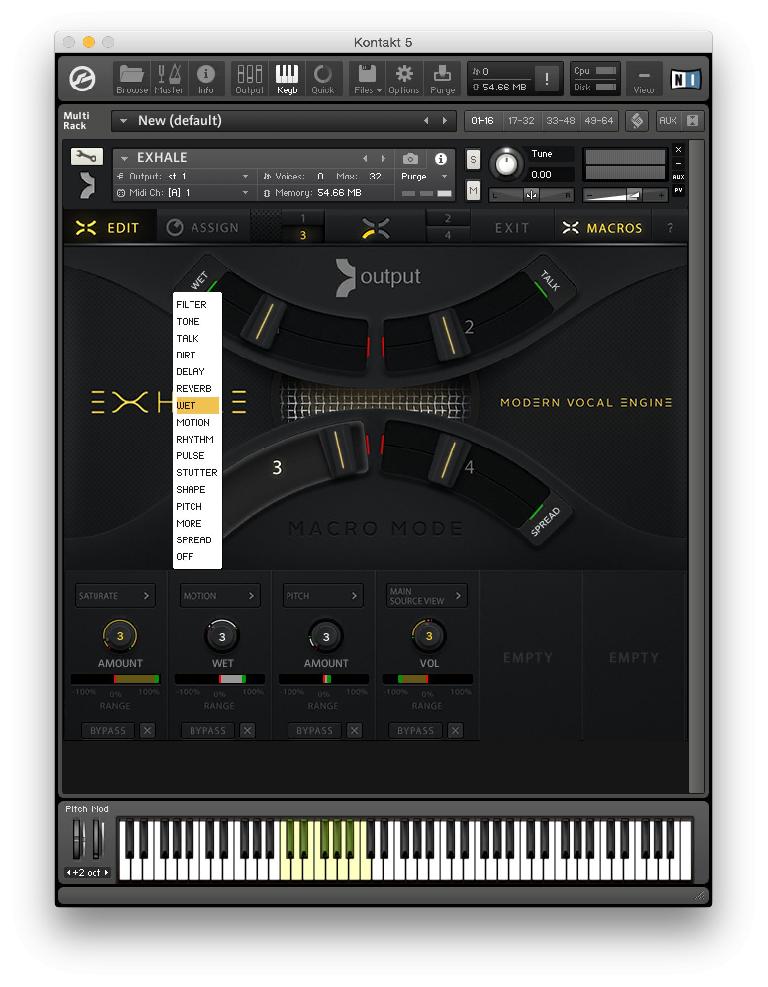 The sounds are very much geared towards atmospheric and percussive characteristics, with many weird and wonderful presets sounding more like synths than voices. It’s about using voices as textures and instruments, though it is also possible to strip back a lot of the processing and access a purer, more conventional kind of vocal sound in many cases.

Dive into the Engine section and things start to get even more interesting. At the top are the two Source sections, each with volume, pan and tuning controls as well as a reverse button, EQ and ADSR envelopes. You can use one or two sources per Notes patch (one each for loops and slices) and clicking on the type box opens a menu. Here you get four sections: one-shot, pads, tape 1 and tape 2 and each one contains 20 sources for the slot. This is much like choosing a waveform for the oscillator of your synth and you find helpful descriptions on each button. A head denotes male, female or group vocal, text describes the sound, and a curve shows if a sound goes up or down at the beginning or end. 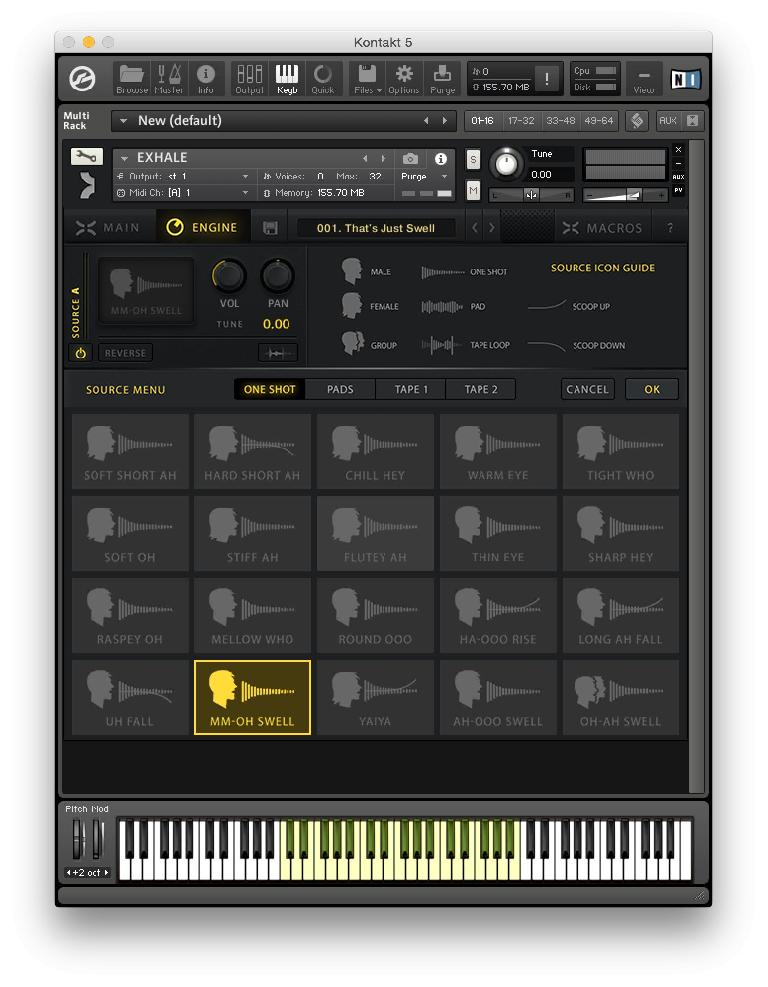 Below this is the FX Engine section which can be turned off entirely if you want just the basic samples, but is also very extensive and configurable. To begin with, there are presets and you can save your own effect setups. There are 13 effects comprising regular stuff like reverb, delay and compression but also more unusual things like pitch shifting, tone and motion. Each has its own set of controls and the upper row can be modulated by assigning from the Rhythm section in the centre. This has 40 preset step sequences which are freely editable and 45 waveform presets. A Rate control lets you set the speed at which the sequencing takes place and by assigning to different effects, you can create complex movement of volume, panning, filters and more advanced stuff like formants and talk envelope. All the effects and indeed the loops follow your host tempo as well. 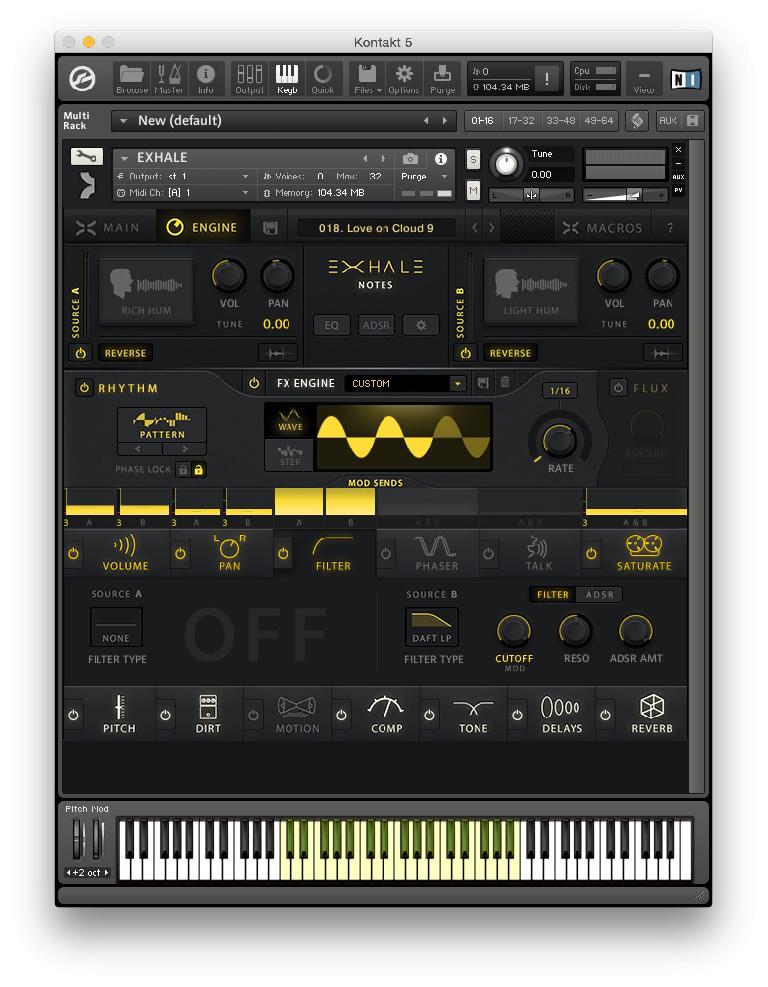 The extensive effects section that can be modulated 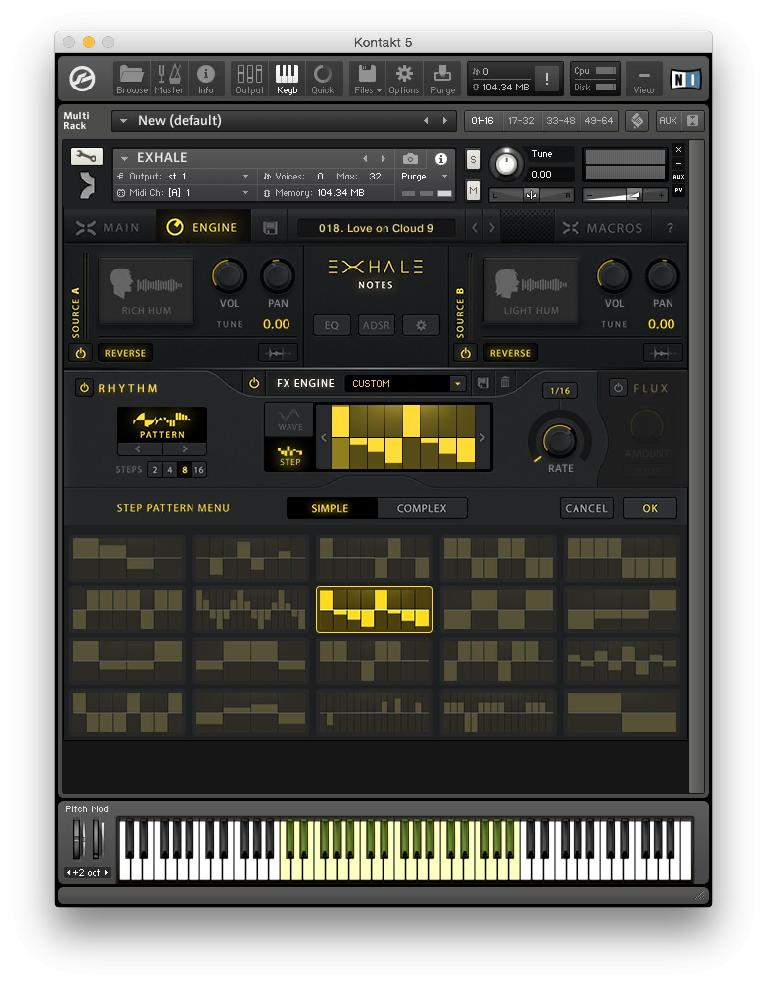 Selecting step presets for the modulator

Exhale is a remarkable instrument that truly turns voices into instruments and effects. It’s very much aimed towards scoring, sound design and electronic music and goes far beyond what you might normally associate with a virtual instrument in the “vocals” category. You can get some more conventional results out of it if that’s your choice, but the real focus is on voices as electronic backing, rhythmic parts and weird sounds. If you deconstruct a lot of modern electronic music (including pop) it’s made up of hundreds of small sounds that you can’t readily identify. There’s a lot of that stuff here and it can be layered and twisted almost infinitely.

Although it may look busy at first, the layout is actually very well done, and choosing sources then setting up effects and modulation is easier than you may think. It’s possible that it may take you a little time to exactly tailor a patch to your needs but then there are a lot of tools on offer and the results are pretty unique. One thing is for sure: you won’t have heard anything like this before.

Cons: You'll need to invest a little time to get the exact sound you want. Probably not for those wanting classical choirs!