All Articles Review
Review: PreSonus Studio One v3
Gary Hiebner on Thu, June 11th 0 comments
Language
Studio One from PreSonus has now reached its third incarnation and brings with it many new features for musicians and producers. Gary Hiebner gives it an in-depth look in our feature review.

The new Studio One has had quite an overhaul with an enormous amount of new features. Many of these aimed at improving your music compositions and workflow. Let’s take a look at some of the standout features that have been added to the new version and their benefits.

First, let's start by looking at the changes to the interface. The color has been slightly darkened and helps make the different sections stand out. But other than the new color change there isn’t a huge difference to the layout. The other difference is the update to the browser window. For PreSonus’s bundled effects and instruments, there are now icons to represent them along with the name. This is a useful feature because as you get familiar with the look of these effects you can quickly grab the icon and drag and drop it to add them to your track. 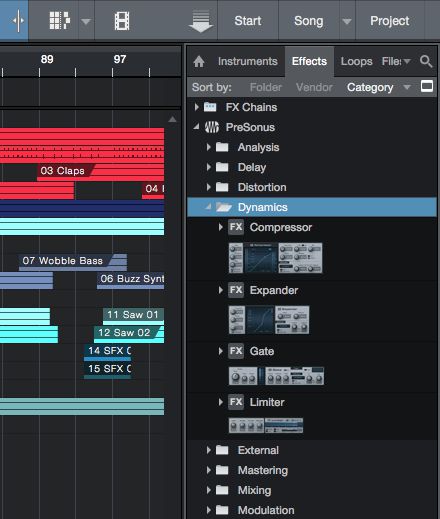 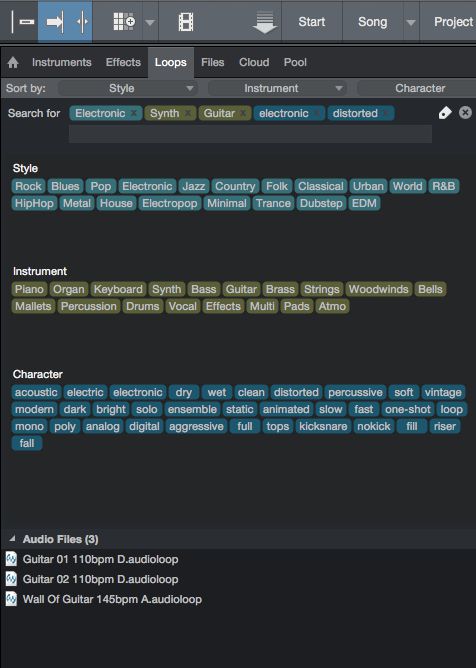 The Arranger and Scratch Pad

The biggest new addition is the Arranger and its counterpart the Scratch Pad. The arranger is a new lane that you can open above your tracks, and in here you can draw in different arrangement parts for your song such as Intro, Verse and Chorus. The beauty of this feature is that once you can draw up your arrangement, you can easily change them by dragging these parts around, and the associated clips will move as well—making it quick and easy to change up your song. This feature works well with the new Scratch Pad feature. This splits up your Arrange area into two timelines so you can have a different arrangement in each split. You can hash out ideas and then when you're happy with them, you can drag them across to the main arrange area. And vice versa: you can drag arrangement parts or tracks from your song into the Scratch Pad, work on them and then when you're finished, drag them back to your main arrange area. So your tracks remain intact with their respective effects and instruments, but you can work out new ideas and then move them back. It also works really well for testing out alternate versions of your songs arrangement. Maybe you want to do a radio mix of your song. Drag the parts across to the Scratch Pad and test it out with the arrangement changes. 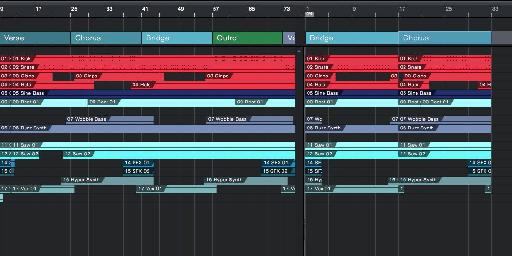 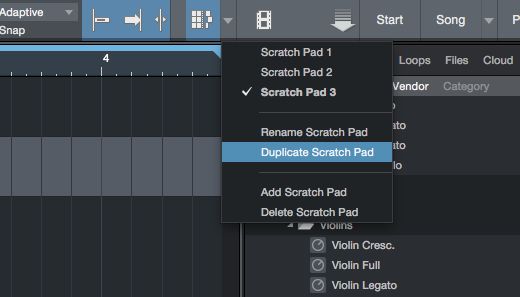 This is an innovative and unique idea on PreSonus’ part. They are definitely catering for the songwriter. It will be interesting to notice how users take advantage of this feature and how it’ll be expanded in the future.

Studio One v3 now has an extended version of its effects chains. You can now create complex effect chain routings. What’s cool is that you can insert splitters into your effect chains, and this way you can create series or parallel chains for your effects. This allows you to really build up complex effect routings. And it’s very easy to build up these chains as you can drag and drop effects into the chain or onto the splitters. And it can be combinations of VST or AU units, so you can make use of all your effects and 3rd-party plugins in these chains. 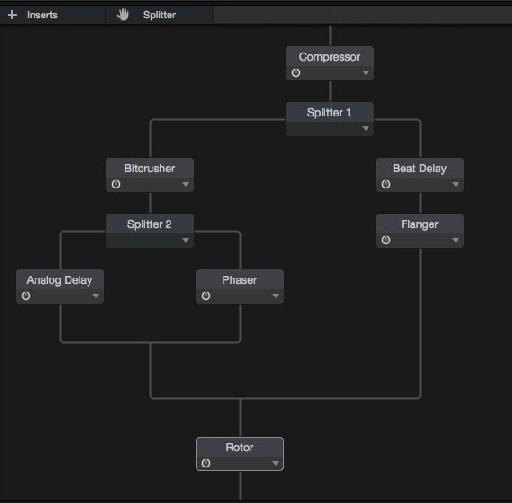 On the instrument front, there have been two new additions. Mai Tai is a polyphonic analog modeling synth. With its oscillators and multimode filters, you can produce a great combination of classic analog synths sounds, through to interesting electronic soundscapes. And by using its modular matrix you can get deep into this synth and produce some complex sound design in your songs. It also comes bundled with some great presets so you can quickly get some analog modeled sounds. I really like the selection of bell and lead presets that come with this synth. But it also comes with a selection of bass, pad, and FX presets. 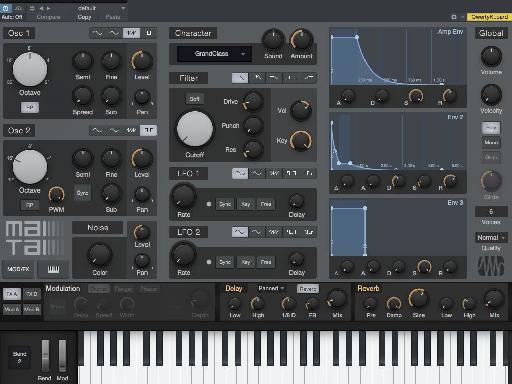 The other addition is the upgrade on the Presence sampler, which has now been rebranded as Presence XT with a whole bundle of new features. The audio engine has been redesigned so you’ll notice a difference in the audio quality when you load up your presets. A new scripting engine has been added to give more realism to some of the analog modeled sounds such as the guitar and bass preset samples by adding in such things as fret noise through the audio scripting engine. The strings samples are also very good with a realism quality. I really liked the violin patches. Also the samples load up very quickly and you can see easily on the keyboard in what range the samples playback from. 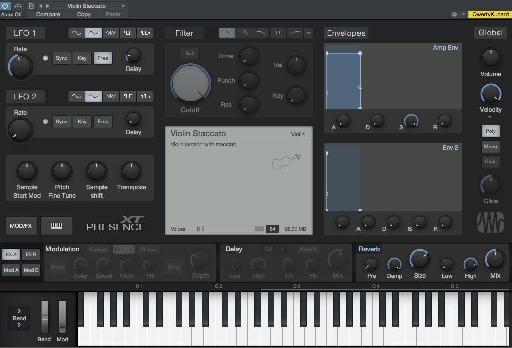 On the MIDI front, there has been the addition of the MIDI effects that can be applied to your Instruments and MIDI tracks. My two favorites are the Arpeggiator and Repeater. Let’s first take a look at the Arpeggiator. This effect allows you to create classic arpeggiation patterns with a modern twist with your MIDI instruments. You’ve got a choice of different arp patterns. And you can set different velocity and gate settings on the 32-step pattern. So using this you can create unique rhythmic patterns in your songs. 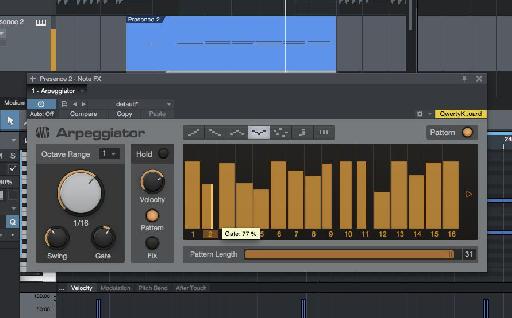 The Repeater is a very simple MIDI echo effect where it repeats the MIDI note, and you can choose how many repeats there are, and their subdivision, velocity and gate settings on the repeats. This is useful when looking to create elements like fast MIDI echos and glissandos. This is super handy in any sound design aspect.

On the MIDI front, I would have liked to see some more advancements with the MIDI tool set to use in the MIDI editor. But hopefully, that will be updated in a future release.

There has been an enormous amount of updates to the new Studio One and each has really helped improve the workflow and musical creativity with Studio One, especially on the musical compositional side. The new look is improved, especially when working on long sessions, but it's not too drastic a change as to put off long-time users. And there has been a slew of audio, and instrument updates. My favorites have been the Scratch Pad and the Mai Tai synth. So it’s definitely worth the upgrade, and if you’re looking for a new DAW option Studio One covers this as it comes packed with features and audio content.

Dream It. Do It.
Do you want to learn Mixing and Mastering Toolbox?
Yes, I want to learn!
No Thanks, I just want to read the article.
Feedback
How are we doing?
We'd love your thoughts, feedback and questions regarding our new site. All feedback is appreciated!
We do not respond to this form! If you need support, please visit our support page.
Thank you for your input!
Your message has been successfully sent
Course Advisor
Don't Know Where To Start?
Ask A Course Advisor