Sugar Bytes' latest virtual instrument Egoist is a sample slicer, TB-303 bass emulation, a simple drum module, and effect sequencer all in one. In this review we'll look at all 4 sections, but the real selling point here is the slicer. The concept is all about loading a sample and triggering different positions on that sample by choosing up to 16 different starting positions. You can move the starting positions anywhere across the sample/audio that you like. Once you've chosen these positions, they can be played live on your keyboard controller and recorded into your DAW, or arranged directly in Egoist's built-in step sequencer. A sizable library of source samples are included as a separate download, but the real fun begins when you load up your own recordings. Imagine using your own audio files with sustained bass, lead, and effect sounds together in the same sample, or stretched drum loops, vocal outtakes, or riser/ filter sweeps as a source for Egoist. This simple but powerful instrument will have you creating complextro, dub step, and electro house chops in seconds. Read on! 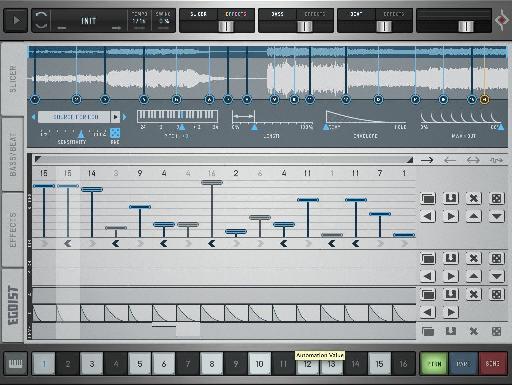 Before we look at Egoist's sound making ability, let's take a look at the step sequencer and MIDI capabilities. Much like a traditional hardware sequencer, Egoist uses a pattern-based method for chaining patterns into a song. You click the pattern button so you can build the currently selected pattern, each of which are selectable via the 16 numbered buttons at the bottom. Each of the 16 patterns can use a separate audio source/sample for making constantly diverse and ever changing sequences. The part button allows you to then chain up to 8 selectable patterns into 6 different groupings. Finally, the song mode allows you to then chain together the patterns you've organized in part mode into an actual song. In all three modes there are clearly marked buttons for copying, pasting and even randomizing. Because of the clearly laid-out (iPad like) interface, Egoist's step sequencer is one of the easiest I've ever used in a plug-in.

If you'd rather use your DAW's sequencer instead, you can press the small piano keys button at the bottom left. This lets you trigger the patterns'"and even cooler'"the individual slices across your MIDI controller. On the setup page you can select wether the sequencer's clock source is internal or via your host, and choose if DAW/host will start the sequencer on playback.

The patterns themselves are triggered by pressing C1 through D#2, and the individual sequencer slices by pressing C3 through D#4. When playing the slices by hand on your controller, everything in that slice/moment plays back including the bass, drum and effects if you want them to. 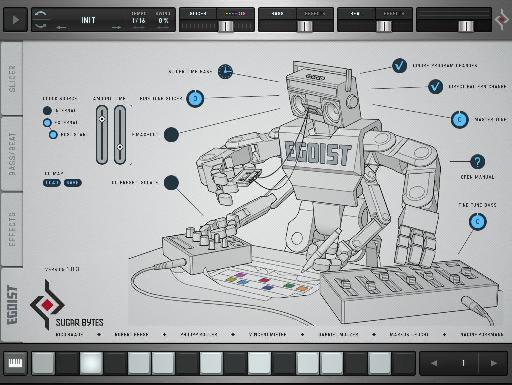 Let's take a look at the Slicer. The loaded sample is clearly visible at the top of the Slicer tab. Directly below it to the left is a file selector for loading samples. Each of the 16 slices are numbered and can be placed anywhere along the length of the audio file. You choose the individual slices to be played in order by selecting their numbers via the 'Slices' sliders on each of the 16 columns of the sequencer below. All 16 sequencer positions (on each of the 16 patterns) have independent attack, decay, forward/reverse, level and pitch adjustments. There's also global pitch, length, and envelope settings, and a 'max out' slider that compresses the sample so each slice can be heard clearly. 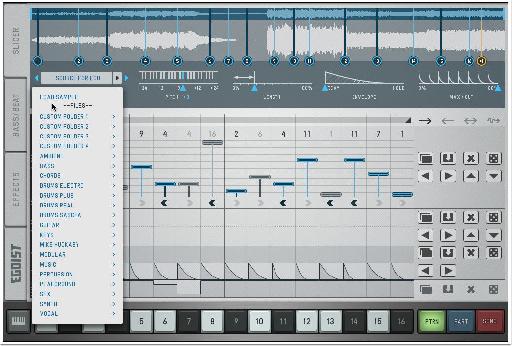 There are many great uses for Egoist's slicer module'¦ In my audio example below I used a source sample made by bouncing a single audio file with contrasting synth sounds. In a recent production, I bounced a section from the song and loaded it into Egoist's slicer. I then created some great sounding chops/stutters by muting everything in the song other than the sequence I built in Egoist.

The bass/beat tab gives you a nice TB-303 bassline sound with waveform selection, filter, resonance, LFO, drive, root note, and a basic envelope. Like the slicer, both the bass and beat modules are triggered with the sequencer below. With the bass module, you have control over various envelope shapes and transpositions per the 16 sequencer positions. There's even a small library of bass presets to select from, and you can even save your own. The simple beat module also has a small selection of presets, each containing a single kick, snare, and hi-hat sound, but each kit has a total of 32 different samples that can be selected globally or independently per voice. You can also control each of the drum sounds pitch, and when sequencing you have loud and soft velocity options. 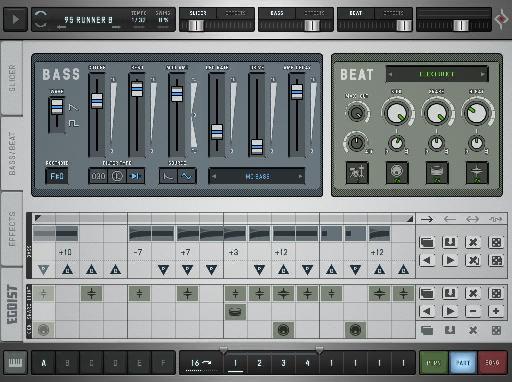 If you haven't used some of Sugarbytes effects like Effectrix and Turnado, you should! They're basically 'effect sequencers' that allow you to trigger various effects via a sequencer or with a MIDI controller. Egoist's Effects tab is basically like a mini version of Effectrix. You have your choice of seven different effects to trigger'¦ a filter with selectable types, and adjustable delay, reverb, lo-fi, chorus, tape stop, and tape loop effects. And yes, just like the slicer, and bass/beat modules, all seven effects can be triggered via a separate sequencer window. 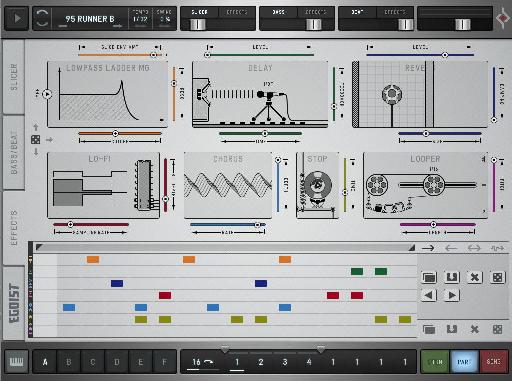 Here's an example of an electro house/psychedelic groove I made in 5 minutes with Egoist only utilizing the Slicer module. The source file was made by bouncing 6 different synthesizer sounds placed one after the other and saved as one audio file: