All Articles Review
Review: Sugar Bytes Factory
Darren Burgos on Tue, July 19th 0 comments
Language
A safari ticket to the wilderness of sound..? This is how Sugar Bytes describe their new modular synth plug-in, Factory. Darren Burgos is on the hunt for powerful sounds and Factory comes up trumps.

Sound designers and producers take note, Sugarbytes new synth Factory is out now. This powerful new instrument can be described as semi-modular since most of the modules like LFOs, envelopes and oscillators are not “hard-wired” to destinations like they are on standard subtractive synths. Nearly anything can be routed to affect any other parameter, by using Factory’s clear and easy to use “mod matrix.” Even audio sources (like the output of the oscillators) are available as modulations sources. There are endless combinations you can patch together in this great synth to create extremely creative and complex sounds. That doesn’t mean there aren’t tons of great presets to use (or start editing from). Factory is loaded with great bass, synth, ambient, and sequenced/arpeggiated sounds that are ready to go from the start. In the review below I go through each main area of this cool instrument and show some of the great stuff in each of them. 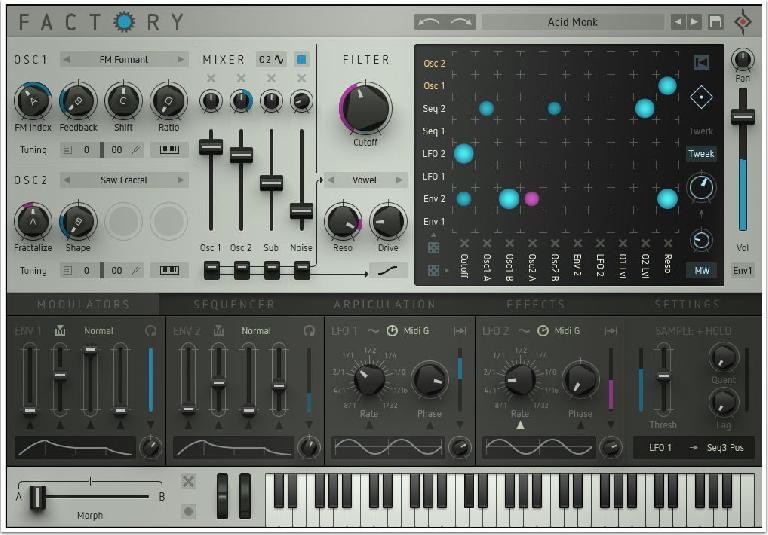 Factory has four simultaneous sound sources (2 main oscillators, a sub, and a noise generator), a multi-mode filter, two envelopes, two LFOs, a four-track sequencer that can control each of the 4 sound sources independently, arpeggiator, a full effects section, and a super powerful modulation matrix that allows you to patch up to 8 modulations sources to 8 destinations. It’s polyphonic, and can play up to 8 voices. When choosing presets, you can drag-and-drop them to a “program list” for easily recalling favorites. By simply looking at how many factory presets there are in each category, you might come to the conclusion that Factory is great for bass, sequenced/arpeggiated sounds, percussion and synthetic FX type sounds, and this is absolutely true. It’s good that Factory’s oscillators focus on more of a digital sound… complex analog emulations would be too CPU intensive in such a flexible environment. 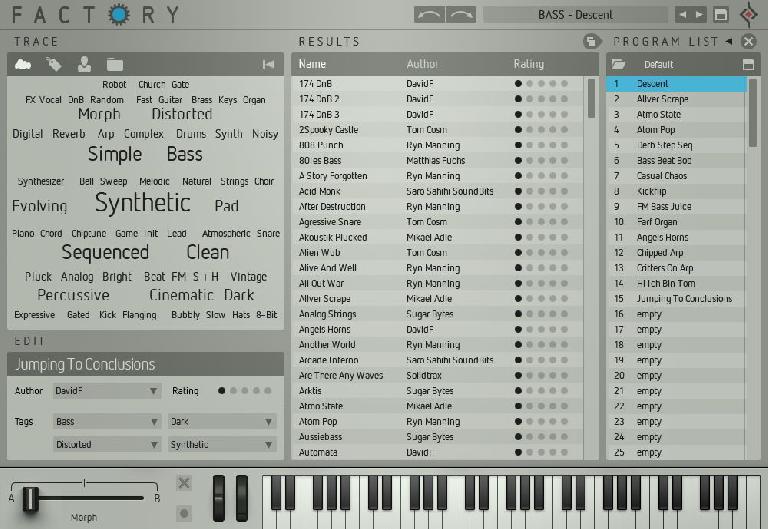 In EMS Synthi fashion (a suitcase synth from the late ’60s) you place pins (circles) between the modulations and destinations on a grid. However, both the modulation sources and the destinations are freely assignable in Factory. The left vertical side of the modulation matrix allows you to select from dozens of different "sources" like your standard envelopes, LFO’s, and your mod wheel, but also fun and different things like pitch, a specific oscillator, and patterns created in the sequencer. The bottom horizontal "destination" row lets you choose from again standard things like oscillator pitch, and cutoff, but also from things usually only assignable as sources like LFOs and envelopes. Want to modulate the speed of an LFO with note pitch? Do it because you can, and it’s a cool thing to do! When you patch a source to a destination, you place a circle/pin at the crossover X/Y position. Even the modulation matrix itself can be modulated (the circles/pins intensity) you choose from an assortment of modulators and an intensity knob at the bottom right corner of the mod matrix. 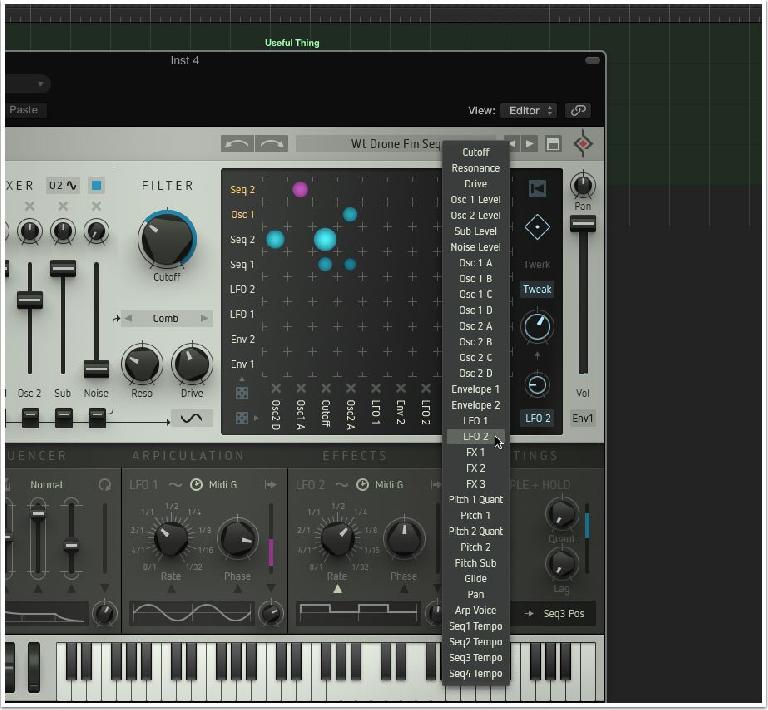 In Factory there are 2 oscillators, a sub, and a noise oscillator for a total of 4 sound sources. The two main oscillators have several different swappable synthesis engines like Pulse and Saw Sync that give you thicker variants of your standard saw and pulse/square waves, but there are options like the Transformer type that allows you to use any sample (it comes with a collection too) as a cycled waveform, and you can even choose the start position of where the cycle begins. There’s also your standard wavetable option with over 100 waves to choose from, a Wavetable Formant option that let’s you create vowel/voice type sounds, and many other obscure types. The combinations are pretty endless here. With all the digital methods, the Sub addition really helps to add depth to the sounds, and the noise generator can be used in endless creative ways like adding short spikes to the attacks, or long noise sweeps. There’s also a mixer section that allows you to blend the oscillators, and these levels can even be chosen as modulation destinations. 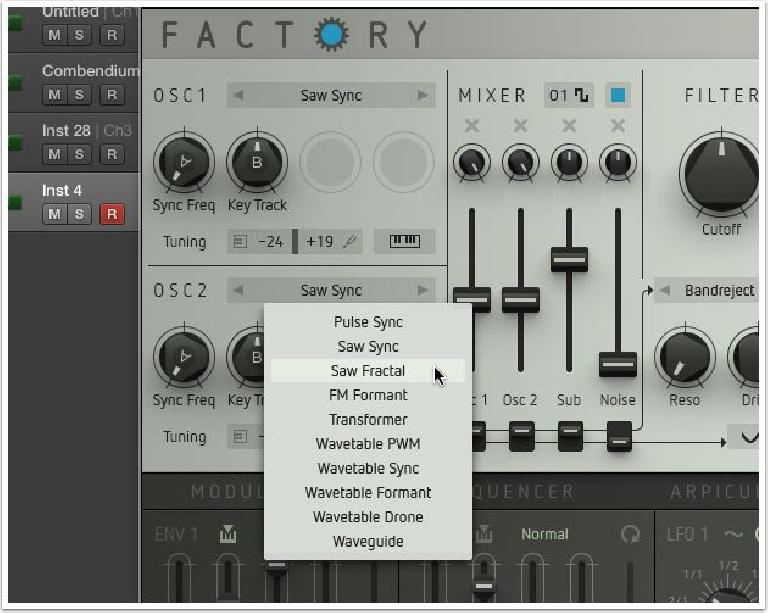 Although there is only a single multi-mode filter in Factory, it’s an excellent one with all the modes you’d expect like several lowpass, highpass, bandpass, comb, vowel and more. Of course there’s also resonance and drive too. At the bottom of the mixer (directly to the right of the filter) each oscillator has a switch so you can choose which one goes through the filter directly, or if they skip the filter and go straight into the drive. Don’t be too disappointed that Factory only has a single filter… in the effects section you can choose from either a Stereo Filter or Dynamic Filter if you need another. 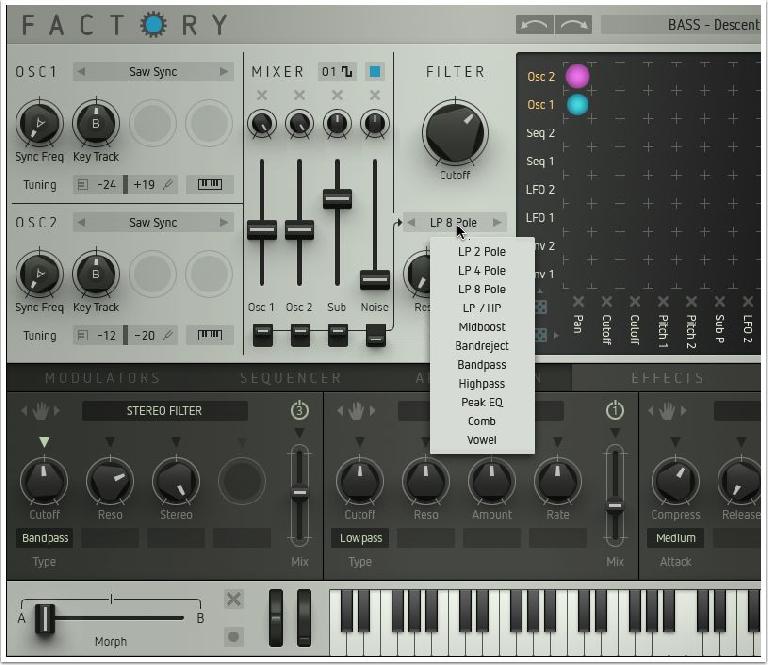 There’s one exception to the modular rule (nothing is connected by default) in Factory. Envelope 1 is pre-wired to the main amplitude. There’s actually two envelopes in total that give you standard stuff like ADSR, but there’s plenty of modulation options here, including triggering the envelopes via one of the 4 sequencer tracks. The two LFOs have all your standard parameters, but can set as “one-shot” so they can be used as short synchronized envelopes, they also have several cool retriggering options. There’s a Sample & Hold panel here that can be used to create random and evolving wave shapes for modulating target destinations. 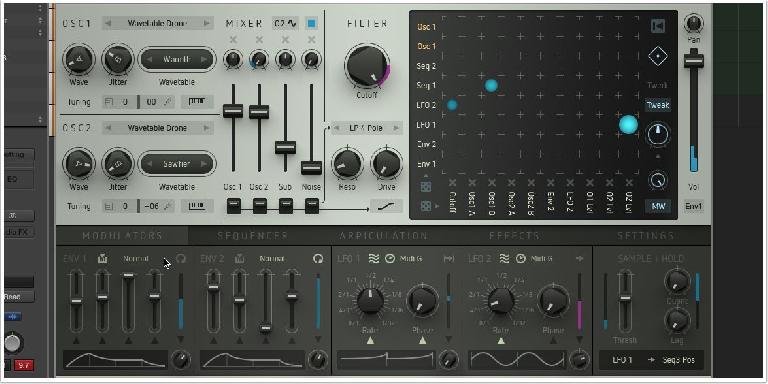 The “Arpiculation” tab in Factory is quite a fun and useful area. The intonation section can create some super cool bent pitch type effects on the attack section of your sounds. Tweaked voices like this are common in Trap, Deep House and more. You control the speed, curve and amount. On the Pitch Factory panel you can do things like lock Factory down to a chosen key and musical scale. This way it’s impossible for Factory to play back any wrong notes. Also on the Pitch Factory tab is a fantastic sounding “Unisono” that thickens up a sound great for EDM leads. Oh yeah, and there’s also a powerful arpeggiator and gate here too! 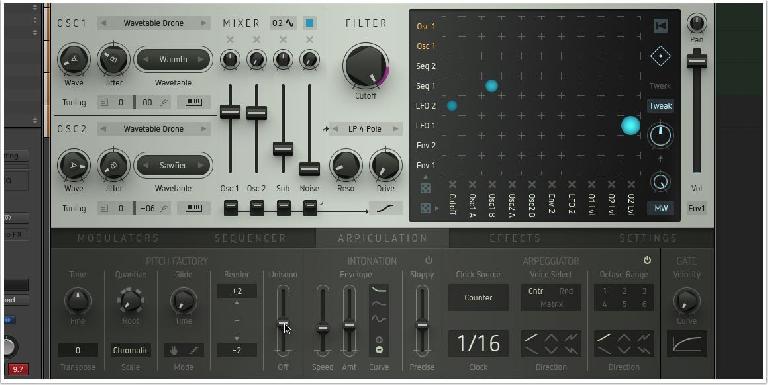 Factory’s great built-in sequencer has 4 simultaneous tracks with up to 16 steps (independently assignable).  Each of the 4 tracks can be used to modulate pretty much anything you want to. Like all the modules in Factory, the sequencer is assigned via the mod matrix. You click and move the mouse up/down in each step to adjust the intensity/amount, and each step has a great collection of shapes you can choose from. There’s plenty of other cool things here, including swing, shifting steps forward or back, and randomization options. 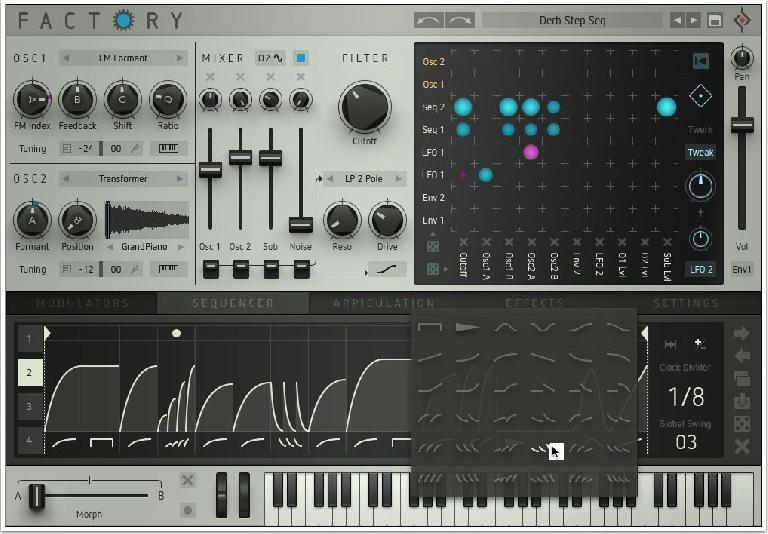 There’s plenty of great effects in Factory too, thirteen to be exact, with up to three simultaneously. You can even drag-and-drop the arrangement of the three. Some of the stand-out effects are Pitch Delay and Shimmer, basically a standard delay/reverb that rises or decreases in pitch as it echoes. Want to be able to modulate a specific knob in any of the effects? Throughout the synth you’ll have noticed dark downward pointing triangles. When you click on these (they turn light colored), you give that specific knob the potential of being modulated via the modulation matrix. For example, only FX1, 2 and 3 can be chosen as destinations in the mod matrix, and not the specific knobs within, but any triangle enabled within the FX will now modulate via the selected source.

To top it all off, Factory’s cool morph slider is super cool and easy to use. You simply move the slider to the A position, set any knobs or sliders, move the slider to the B position, and again set the knobs, but this time where you want the knobs/sliders to be in their end position. Now simply moving this slider left and right and all the parameters you set will “morph” between positions.

Cons: Not necessarily a con to some, but Factory’s overall sound seems to lean toward the digital versus analog side.

Dream It. Do It.
Do you want to learn Pro Tools 2021 - Beginner's Guide?
Yes, I want to learn!
No Thanks, I just want to read the article.
Feedback
How are we doing?
We'd love your thoughts, feedback and questions regarding our new site. All feedback is appreciated!
We do not respond to this form! If you need support, please visit our support page.
Thank you for your input!
Your message has been successfully sent
Course Advisor
Don't Know Where To Start?
Ask A Course Advisor