I'll never forget the first time I heard about the big, bad synthesizer that Propellerhead were in the process of adding to Reason. Before I even saw it, I was already hearing about how it would rival hot synths of the time, like the Access Virus, and how good it sounded. When I finally got the first beta of that synth, and was asked to start making sounds for the Reason Factory Soundbank, I swear I must've spent two hours playing around before I even thought about saving my work!

At that point, all of the functionality wasn't even in Thor, yet. Art was missing, features of the Modulation Bus weren't all in. But, the potential was there, and it was huge.

It's hard not to think about those times as I sit and write this, while continually playing with the new Thor for iPad. I'm even seeing patches that I made way back when. Though, I'm in a completely different surrounding than before. I live in a different part of the country, have a different car, different people are around. But, Thor is still the same.

Yep, even though Thor has been migrated to the iPad, all of the functionality is still intact. I would even say lovingly so. But, it's not just thrown in. The art has been painfully redone, manipulated and embellished to make you think you're still back in your virtual Reason studio. It's really like pulling out that old, worn synth that you spent so much time with from the rack that you installed so many years ago, and finally noticed that it was portable. How did I miss that in the manual?! 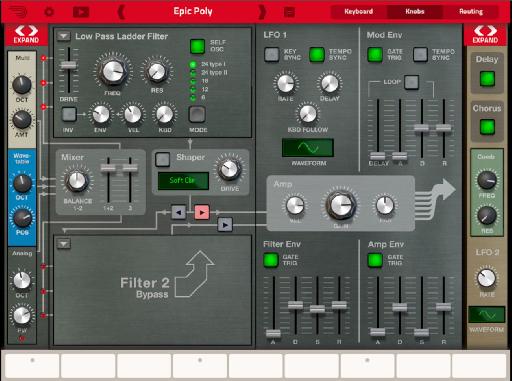 Thor for iPad: The knobs sections

And, if Propellerhead continue down the same path, maybe eventually we'll have all of those individual pieces of Reason gear available on individual iPads in the coming year. I, for one, would love a Matrix! But, for now, we have perhaps the most amazing piece of kit within Reason looking at us right in the face.

Normally, I would start with 'how it sounds' and 'what can it do'. But, let's face it, the interface is a huge concern on iDevices. Thor is a testament to what Propellerhead have learned from each of their releases for iOS. And, let me tell you, they've learned a lot.

Propellerhead have included easy ways to expand and collapse areas of the interface.

Even though it doesn't necessarily look like it, Thor is a massive synth with a ton of functionality. It's easy to forget this when you see it on a computer screen. Amazingly, Propellerhead got everything in on the front panel. All of the original oscillators, filters, LFOs, envelopes, effects and routing possibilities are there. Thor was designed to be a semi-modular synthesizer from the get-go. And, you can tell that Propellerhead did everything possible to keep all of the features of Thor intact. Even small nuances like the Sync/Bandwidth, and Amplitude modulation slider from Oscillator 2 to Oscillator 1 have been kept around.

There have also been some new additions that I'm extremely happy with in terms of playability on the iPad. The built-in keyboard supports mainstay functions like a collapsible keyboard. But, they went even further and added a Strum section where you can actually play Thor like a guitar. And, before you scoff that this is some Garageband, kiddie feature, it actually works pretty well and could lend some coolness to any  performance. 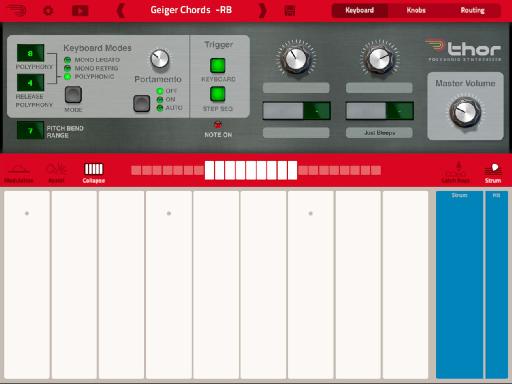 Do you recognize the keyboard layout section? (Figure features something similar).

All of these elements of Thor are carefully balanced with the Menu bar and these small Expand buttons that allow you to move to different sections of the massive synth. Knobs and sliders are so, so easy to use as well. Simply tapping on knobs like the Amp knob will bring up a graphic indicator letting you know the exact amount that you're assigning. So, if you're really big in to sound design, and aren't just picking this up to be an external instrument, you'll be extremely happy.

Speaking of sound design... Any patch that you create on the iPad version of Thor can be migrated over to Reason. Simply connect the iPad to the computer and look under the Apps tab under the iPad device in iTunes. Though, accessing Thor patches you've made on your computer is much easier. For example: You can email them to yourself, click on the attachment, and Thor will open up with the new patch. This is a huge thing for me, as I still make a lot of Thor patches for my own work, and occasionally my macProVideo tutorials. My Thor tutorial would be an excellent example!

What's huge is the fact that Thor for iPad can be controlled via external MIDI. This opens up huge possibilities and, in reality, makes a true, external hardware version of Thor. You can actually control the iPad version of Thor from Reason now, since Reason has external MIDI! Or, if you're an Ableton, Logic Pro, or Pro Tools user, and want Thor at your beck and call, you don't have to worry about setting up Rewire anymore.

Propellerhead also kept around the very utilitarian step sequencer that has always dwelled within Thor. And, thankfully, they kept it as assignable as it's always been. It's usage may actually throw new users off at first, because it isn't as plug and play as some of the other iOS apps out there. There is a little bit of setup in the exact same way as the original Thor sequencer within Reason. But, once you're used to it, you can begin using it in the way that the rest of us all enjoy. You can route the sequencer through the Modulation Bus routing section to different parts of the Thor synthesizer and create some amazing sounds... Just like a modular synthesizer... Just the way Thor was intended to work. 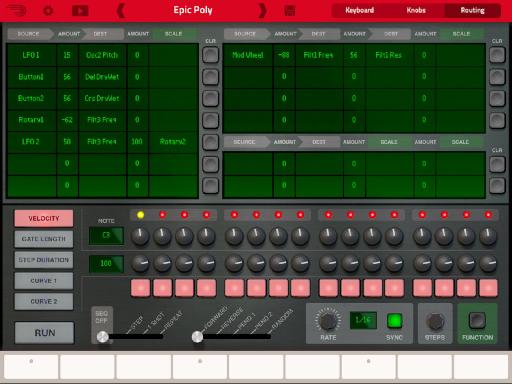 All of Thor's routing capabilities, right at your fingertips'¦ literally!

As I said, this very small purchase gives you a true, external hardware Thor synthesizer.  All of its functionality is there and it's been designed to be used with another DAW, or without. It's current $15 value is a steal, considering the amount of polish and care that went in to this release. And, as an iOS app, it will probably be updated with the same care and attention in which Propellerhead have approached other apps of theirs like Figure and Rebirth. 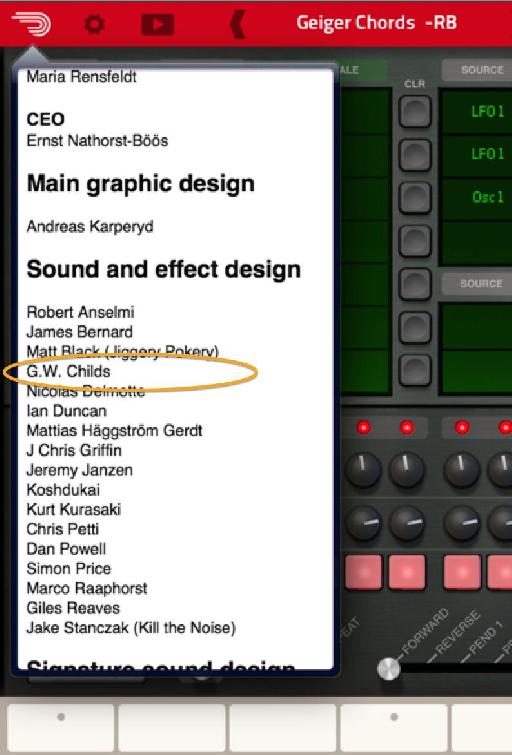 Thor for iPad is the full experience! You'll even find the sounds and patches from the original desktop computer version included.

Even if you aren't a Reason user, I would seriously suggest picking up Thor for iPad. In fact, this really is a chance for non-Reason users to get in here and see what all the fuss has been about for so long, without having to commit to a big software purchase. 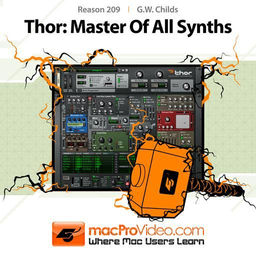 Dream It. Do It.
Do you want to learn Thor: Master Of All Synths?
Yes, I want to learn!
No Thanks, I just want to read the article.
Feedback
How are we doing?
We'd love your thoughts, feedback and questions regarding our new site. All feedback is appreciated!
We do not respond to this form! If you need support, please visit our support page.
Thank you for your input!
Your message has been successfully sent
Course Advisor
Don't Know Where To Start?
Ask A Course Advisor