All Articles Review
Review: Waves BassRider
Darren Burgos on Sun, May 6th 4 comments
Language
Mixing bass can be a struggle, especially when slapping a standard compressor on the track doesn't even things out. Darren Burgos tests out BassRider as an alternative to manually riding faders.

Keeping consistent bass volume levels has always been vital to achieving a great mix. There's only so much a standard compressor can do though. A single band compressor responds to everything being sent into it; even string noise and artifacts. A common practice amongst engineers and producers is to literally 'ride the volume fader.' When the bass starts to sound a little too loud, you actually pull the volume back on the fader, and when it needs to be louder, you push the fader up. Back in the day, you would do this direct to tape, but today it's a bit easier with automation enabled. You can also do this in your DAW's sample editor ...note by note. For this reason alone, you can see what a time saver BassRider can be! 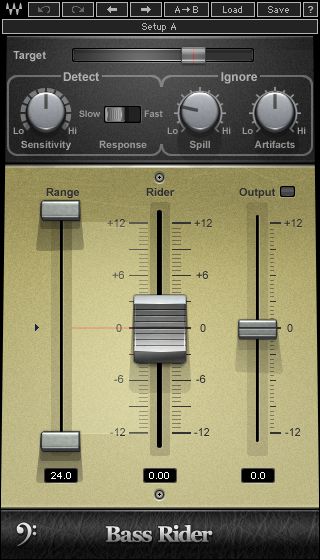 Waves BassRider plug-in not only 'rides' the volume fader for you automatically, but works on a note by note basis, allowing each note's attack and release to play out naturally. It's tuned specifically for bass instruments. The effect is extremely transparent, without the noticeable 'pumping' you hear from a traditional compressor. If you're an electronic musician, it's easy to dismiss this effect as only being useful for traditional bass instruments. But that's not true here. We've all experienced synth bass sounds where one note played at the same velocity hits fat and hard, and just a few notes up, the weight of the sound is much weaker. Or one note in your bass line sticks out, and no amount of EQ or compression seems to contain it. BassRider is perfect for these conditions.

When you buy BassRider (currently $99 USD), it comes with two plug-ins. One version is for mixing, and the other is a low latency version for live recording. There's only a handful of parameters on BassRider which I think is great ...it doesn't disrupt the musical flow! It's one of those effects that requires minimal adjustment for an amazing result.

The Target meter allows you to set your bass sound's average volume. As you watch it, a yellow bar moves in time with the level of your incoming bass. You set the slider on the target to roughly the average level or your bass. 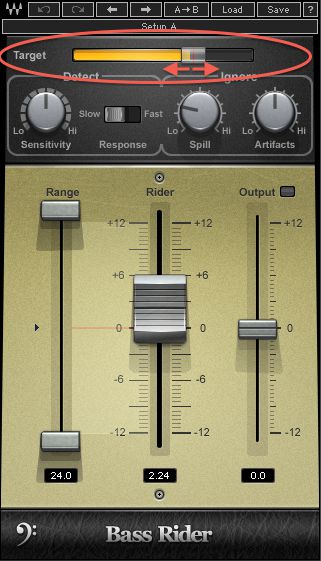 There are two parameters in the Detect section called Sensitivity and Response. If BassRider doesn't sound like it's leveling out the bass correctly, you can watch the Rider Fader (the large fader in the center of the plug-in) ...if it's not moving in time with your part, you can adjust the sensitivity knob until all the notes in your part are detected. You may also need to adjust the Response switch (Depending on what type of bass you're sending through BassRider). For slower bass lines with fewer notes, Slow Response usually works perfectly. For faster bass parts with lots of notes, or arpeggiated synth bass lines, the Fast position is the better choice. 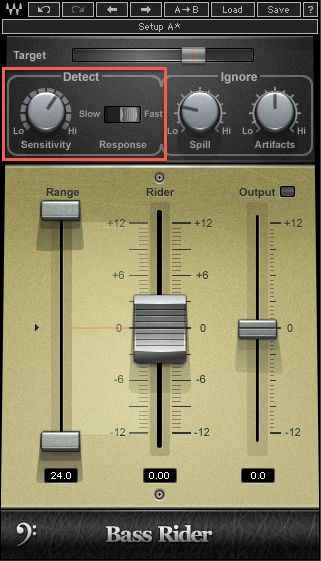 On to the Ignore section. If the bass line was recorded live, you can adjust the Spill knob so BassRider attempts to ignore the low level spillage from other instruments. Depending on the volume level of the spill, you adjust the level from low to high accordingly. Often, bass sounds have artifacts, or sounds/transients that are inherent to the instrument itself. For example, you'll often hear squeaks from the strings on an electric or upright bass. On synth bass sounds, it's very common to hear oscillators set to high frequencies to help add punch and style to the sound. If BassRider is accidentally responding to these artifacts, they can be ignored with the Artifacts knob. It can be adjusted from low to high depending on the amount of audible artifacts.

You'll know when you need to adjust the Artifacts parameter. Not only will you audibly hear the artifacts being amplified, but you'll also see the Rider Fader responding to them. 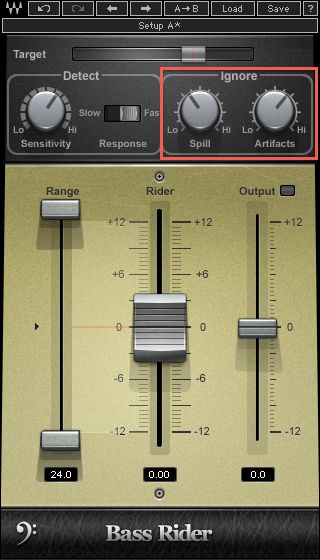 Finally, let's look at the Range, Rider, and Output faders. You can narrow the dynamics of the BassRider effect on your sound with the Range sliders. By adjusting them, you put a floor and a ceiling on the Rider Fader's movement. The small arrow between the two Range sliders is called the Idle Arrow, it's used to set the default volume level when no signal is detected. I normally leave this in its default position, but if the bass sound being processed has a high noise floor, I can see this being used like a gate. The Rider Fader itself is not meant to be adjusted manually. It automatically 'rides' depending on the plug-in's other parameters. Depending on the position of the Target slider, you may need to adjust the Output Slider to either raise or lower the volume. It can be adjusted plus or minus 12 dB. 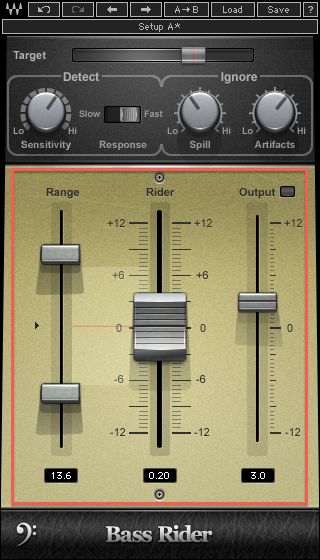 If you don't own BassRider yet, go download the demo from Waves (currently an iLok is required), you'll love it!