All Articles Logic Pro
This Video Explains How Modulation Works For Logic Pro X Or Any DAW
Hollin Jones on Fri, October 28th 0 comments
Language
Logic expert Joe Albano shares his expertise on the science of modulation and shows you how Logic's effects can be used to add movement and interest to any sound.Â

Modulation is a term that pops up in all aspects of music production from synthesis to effects. But how much do you really know about it? Joe Albano goes back to basics in this 8-minute video to give you the lowdown on what exactly modulation is and how it works in the context of audio processing. Breaking down some of the most common kinds of modulation like chorus, doubling and delay, you will learn how LFOs affect modulation and the differences between the various stages of a modulation effect.

By explaining the science behind modulation, this course helps you to understand how Logic’s effects are changing and processing your sounds and therefore gives you a better grasp of how and when to use them. You’ll see things described using diagrams as well as the plugin interfaces you know and love, making everything easier to follow and understand. In the other course videos you will learn in more detail about specific plugins including Rotor Cab, Phaser, Tremolo, Mod Delay and many others.

Logic Pro X’s FX plugins, with their redesigned GUI and added functionality are now more powerful than ever. Get the inside info on all of LPX’s modulation plugins FAST in this FastTrack™ course by Logic expert Joe Albano.

We’re giving all of Logic’s family of plugins FastTrack™ courses! This first course’s focus is on the modulation plugins. And who better to teach them than Logic whiz, Joe Albano! He starts out this course with a couple of tutorials that explain the theory of audio modulation. Then he plunges right in, demystifying the functionality, GUI and controls of every mod plugin in the Logic Pro X library!

Plugins covered in this course: 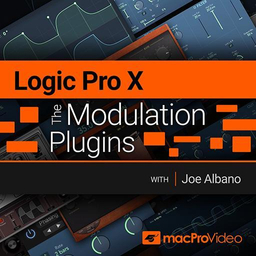 Dream It. Do It.
Do you want to learn The Modulation Plugins?
Yes, I want to learn!
No Thanks, I just want to read the article.
Feedback
How are we doing?
We'd love your thoughts, feedback and questions regarding our new site. All feedback is appreciated!
We do not respond to this form! If you need support, please visit our support page.
Thank you for your input!
Your message has been successfully sent
Course Advisor
Don't Know Where To Start?
Ask A Course Advisor