All Articles Audio Software
Tips For Creating Perfect Melodies For Hip Hop Trap
Hollin Jones on Thu, November 17th 0 comments
Language
Take a trip into Trap with Atlanta producer Booker Edwards as he breaks down how to create melodies and sequences that embody the very essence of this hip hop style.

Hip Hop has evolved in many different directions and Trap is one of the most intense. In this short video from Atlanta Trap producer Booker Edwards taken from the Hip Hop Trap course, you’ll see how using specific types of melodies and chord progressions is crucial to nailing that Trap sound and feel. Using his experience of Trap producton, Booker shows how to strip things down to the very essentials to get a lean and mean character for your tracks.

Breaking a track down into its constituent parts, you’ll see how to separate out instruments into different frequencies so that each one has its own space in the mix, as well as how melodies and beats can complement and work with each other to come together to fill out the finished track. Get down and dirty with the essentials of Trap!

Here’s Booker Edwards to take you on a step-by-step journey into the urban world of Hip Hop Trap. He tears this dangerous genre apart exposing its gritty elements and then builds it back up again revealing it in its full dance music glory. Along the way, you learn all about its themes, sound design and songwriting elements. Booker also dives into the urban production techniques where you learn how to recreate the beat patterns, melodies and chord progressions that set this genre apart.

So join dance music producer Booker Edwards with his unique urban take on Hip Hop Trap and be sure to watch every course in our Dance Music Styles series. 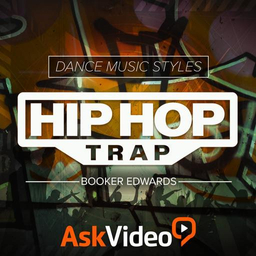 Dream It. Do It.
Do you want to learn Hip Hop Trap?
Yes, I want to learn!
No Thanks, I just want to read the article.
Feedback
How are we doing?
We'd love your thoughts, feedback and questions regarding our new site. All feedback is appreciated!
We do not respond to this form! If you need support, please visit our support page.
Thank you for your input!
Your message has been successfully sent
Course Advisor
Don't Know Where To Start?
Ask A Course Advisor