All Articles Recording & Production
How To Edit & Tighten Up Multitrack Drums In Cubase
Hollin Jones on Sat, December 9th 0 comments
Working with multichannel drums doesn't have to mean headaches when editing. Here, learn how to align, cut and quantize drum tracks without losing sync.

We spend a lot of time learning how to use our DAWs and plug-in instruments and effects, but the business of constructing a song is a whole different art form. In this course, Eyal Amir shows you techniques that can be applied to songwriting in any software to improve your skills. In this video specifically, he talks you through creative editing of drums for a better and more interesting arrangement.

Multitrack drum editing helps you to work with multiple stems of recorded drums, typically from a fully mic'ed drum kit but also potentially exported from a multichannel drum instrument. Using the tools in Cubase - or indeed another capable DAW - you'll see how you can align and edit tracks, making cuts while never losing sync. The rest of the videos in this course cover many other aspects of song composition and construction so check them out as well!

Watch the full course Cubase 7 404: Evolution Of A Song in the Ask.Audio Academy | macProVideo | AskVideo

Eyal Amir may be one of most creative composer/producers on the planet. He is also an inspiring teacher. So when he came up with the idea to create a song using advanced overdubbing and sampling techniques all using a single mic, we were like – Duh!!

Deploying Cubase – his DAW of choice – he begins this creative journey with a simple melodic seed. Throughout the entirety of this course, we get to witness and learn how he cultivates that innocent idea into an extremely complex and innovative track.

You see how to do advanced sampling techniques. Here, he records real drums and combines them with his own sampled drums to create an army of percussion that is the track’s driving force! You also learn how to record and maximize the sonics of your tracks using just one microphone (an AKG 414). There’s even a section on vocal arranging and tuning that will forever change the way you think about recording voice!

Most of all you get a behind-the-console look at how a top producer like Eyal Amir visualizes everything in a production as he constructs melodies, beats and harmonies all within a song form to attain a very high level of musical production.

Watch the full course Cubase 7 404: Evolution Of A Song in the Ask.Audio Academy | macProVideo | AskVideo
Related 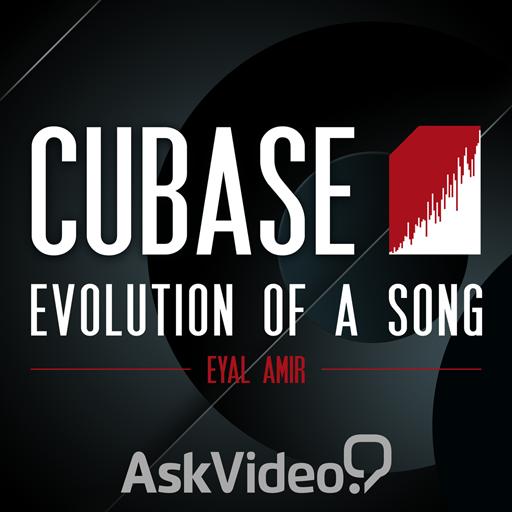