All Articles Final Cut
Going 64-Bit? How To Use Legacy Media in FCP X and Beyond
Iain Anderson on Sun, April 7th 0 comments
Future proof your media library and avoid any shocks when Apple next updates mac OS. Iain Anderson explains everything you need to know.

Apple doesn’t shy away from a hard transition. They’ve done it many times before, moving from 68000-era chips to PowerPC, from PowerPC to Intel, and if you believe the rumors, might even move Macs from Intel to their own A-series chips in the future (though I don’t think that’s happening any time soon). In software, they’ve moved from the classic Mac OS to Mac OS X (now macOS), from Final Cut Pro 7 to Final Cut Pro X, from 32-bit to 64-bit, and (behind the scenes) from QuickTime to AVFoundation for video playback.

In the past, these transitions have been somewhat gentle: Intel Macs could run PowerPC apps for some time, and the first several releases of Mac OS X came with the Classic environment to run older apps. But at some point, the crutches were removed, and the ability to work with the old disappeared. It’s about to happen all over again, and this time, depending on your workflow, there could be trouble in the video world.

The advantage of Apple’s forward-looking strategy is that they remain nimble, better able to take advantage of the newest tech — and it’s a key reason why the Mac-only FCP X is much faster than the cross-platform Premiere Pro. The main disadvantage of this fast-moving strategy is that older software will eventually stop working, and you’re out of luck if you can’t find a replacement. The good news is that Apple is currently providing a clear upgrade pathway for your old media. Let’s dig in. 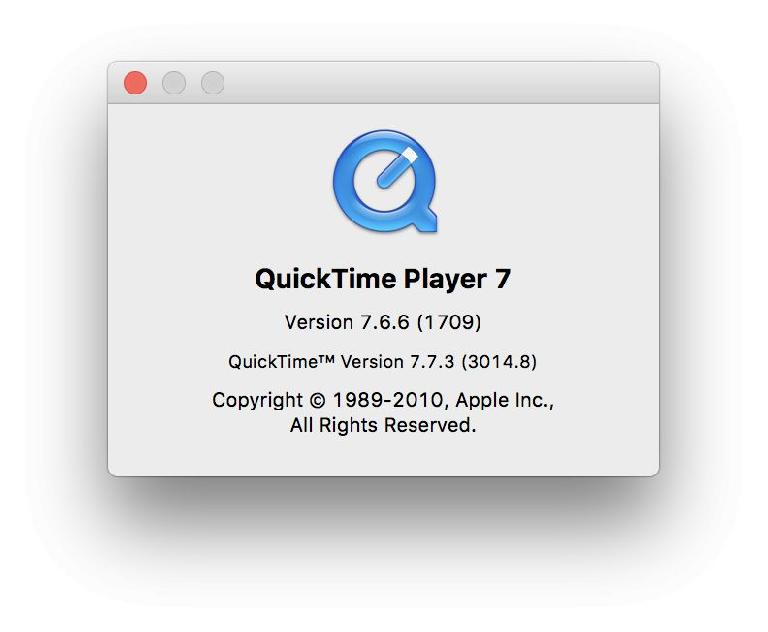 The next version (10.5) of macOS after Mojave (10.4) is going to remove the ability to run 32-bit apps, and while most users won’t notice, some will experience significant pain. My personal invoicing package of choice (which will remain nameless) went subscription-only several years ago, and my outdated standalone copy is 32-bit. While it works perfectly today, it’s not going to launch at all on this year’s new OS. Outdated apps is an issue with an obvious fix — a new or updated app — but a deeper problem is below the surface, in deprecated video APIs and obsolete technologies.

The older QuickTime API was 32-bit, as were plug-ins written for it. There are many of these plug-ins out there, to support Cineform, Avid DNxHD, and other codecs. Media has now largely moved to standards-based formats like H.264 and HEVC, which is lucky, because… AVFoundation doesn’t support codec plug-ins. Makers of these codecs are unable to add system-wide support, and that includes Avid: you won’t be able to view DNxHD QuickTime movies with QuickTime Player in the next macOS, nor will you be able to read media in a selection of really old or obscure codecs. 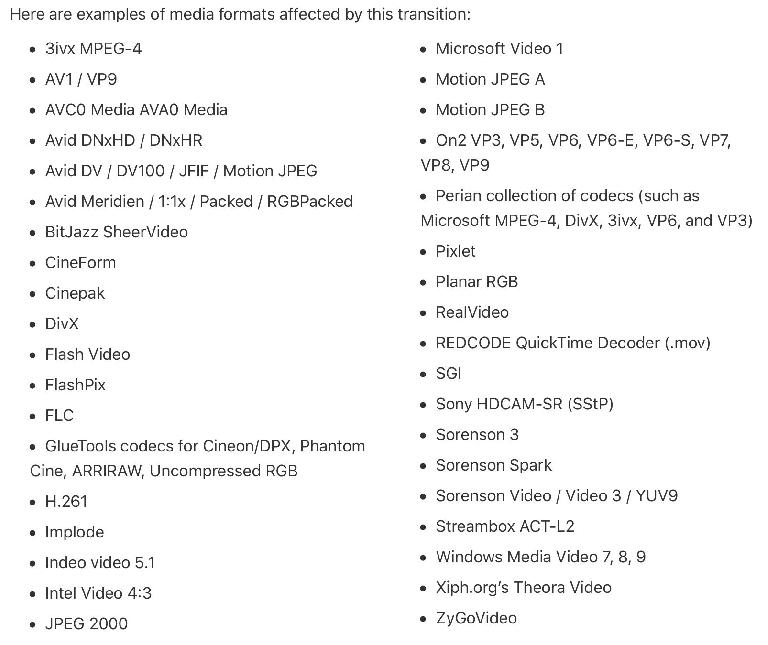 So, Will Avid Media Be Unreadable In The Next OS?

Of course not! Avid Media Composer will still be able to work with media using Avid codecs, but QuickTime Player, and any third party apps that relied on QuickTime, will no longer be able to read those files at all. So long as editors export any review files in something standards-based like H.264, this shouldn’t cause too much trouble.

Apple will continue to support a wide range of codecs going forward (even ancient DV and HDV) and they’ll continue to support Canon RAW Light and REDCODE through FCP X plug-ins, but third parties have to provide app-based support for anything else. But old media’s not going to get a dedicated app. If you have any uncompressed media, HDCAM-SR, Cinepak or other 90s codecs, you’ll need to do something about it.

Update to FCP X 10.4.6 and open all your old libraries over the next few months

Solutions For Media You Can Read Now

If you have media in an FCP X library that’s going to be unreadable in the next macOS, the latest FCP X 10.4.6 will warn you, and then offer to upgrade it for you. If you’ve seen this warning and cancelled it, you can force the conversion for an entire library from the File menu. 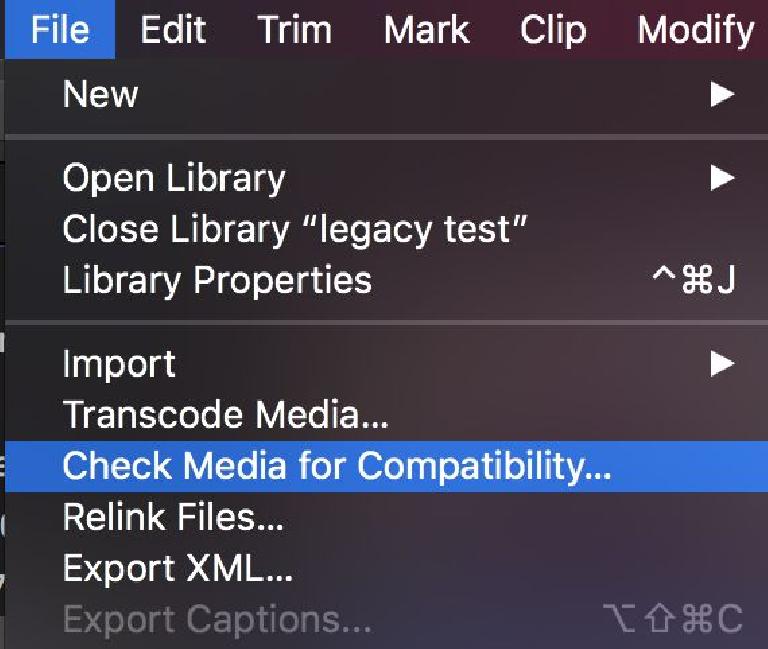 If you cancel the conversion warning when you open the library, head here

Going through my own media, none of the footage that came direct from a camera has caused any issues. Even older DV footage is totally fine, because Apple continue to support it in the new 64-bit future. But I have had issues with rare QuickTime movies that used the JPEG2000, Uncompressed and PNG codecs. Final Cut Pro now converts these to ProRes 4444, and everything works seamlessly. QuickTime Player, Compressor or Apple Media Encoder can also convert these files (to ProRes, H.264, or whatever you choose) if you’re not an FCP X user.

But the big thing to realise is that this feature won’t work on the next version of macOS. Post-Mojave, incompatible media will need to be converted in a third party app, or by a Mac running an older version of macOS. You might be wondering, then — how long can you stay on Mojave, just in case? 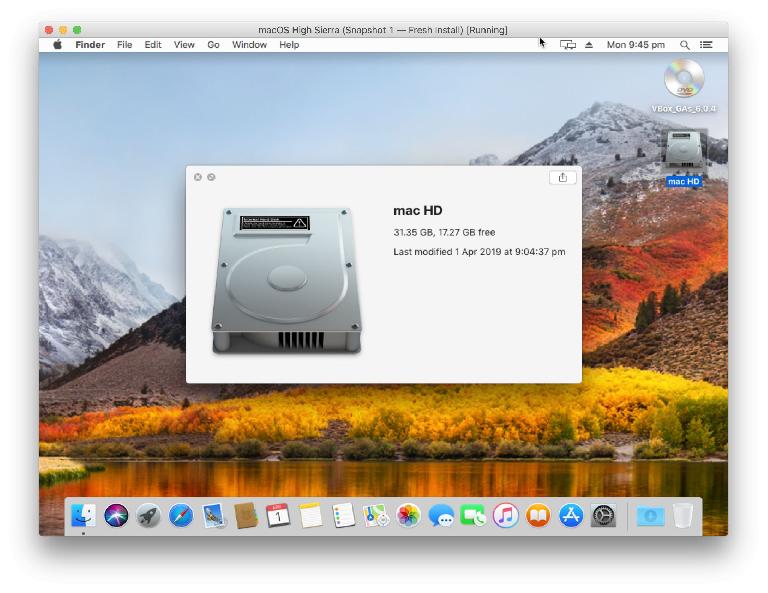 Solutions For The Future

It’s not possible to stay on an older version of macOS indefinitely. When you buy a new Mac, it always comes with the latest macOS, so eventually your hand will be forced. Right now, that’s an issue for ProTools users, as ProTools is still (!) not ready for Mojave at time of writing.

So what’s going to happen if you’re given some old footage in a couple of years' time? You won’t be able to convert it with the built-in apps on macOS 10.15 or 10.16. You might be able to find an old Mac, or an app to convert that codec into something more standard, but it’s a good idea to set up a virtual machine with Mojave or High Sierra right now, to guard against future problems. This is the solution I’m planning to use to keep my old accounting system working, and to run any forgotten 32-bit apps I discover down the line.

A virtual machine (VM) is like a whole extra computer that lives inside your regular computer, and can run an older version of macOS as a “guest” while your new Mac acts as “host”. You can run older apps inside it, and exchange files with your current system. If you have a 32-bit app or two that fills a vital role (such as DVD Studio Pro or Final Cut Pro 7) then you don’t have to give it up completely. Running it will be more inconvenient, and will take up more RAM, but it will probably work — theoretically forever. At the very least, you should be able to convert the odd file and get it back to your main Mac.

One free option to run virtual machines is Virtualbox, and though it mostly works, it’s tricky to get set up and has a few bugs; you get what you pay for. You’ll have a better experience with a paid option like VMWare Fusion or Parallels Desktop, but for occasional use, the free option is OK. After a bit of a struggle, I’ve got a virtualized High Sierra running on… High Sierra. Revolutionary? Impressive? Not until I’ve got my old apps running on 10.15.

To make sure you can install your own virtual machine in the future, grab the High Sierra installer now from the App Store here, and follow these instructions. It’ll almost certainly take more work than you think, but you’ve got six months to sort it out.

Another option, which will only work with current Macs, is to create an external boot disk with High Sierra or Mojave. This will be faster and simpler, but won’t work with future Macs that require macOS 10.15 or later.

Phew! No problems with this library (or most of them)

The world isn’t about to end, but the next OS upgrade will bring a little pain, with a few forgotten apps that no longer launch, and a few old files that are harder to read. Apple has been warning developers that this change was coming for several years, and the strategy of “ignore the problem and it’ll go away” doesn’t seem to have worked. I can imagine that if I’d standardised a large media library on Cineform, I’d be a bit annoyed — but at least Premiere still supports it. Avid is likely the main place where DNxHD will be used, and that will work, but files will be a little more isolated there than before. Modern, standards-based media will continue to work everywhere, and thankfully, the world’s not about to end.
Still, a little preparation won’t hurt. Create a VM, or keep an old Mac on High Sierra just in case, and you’ll be fine. 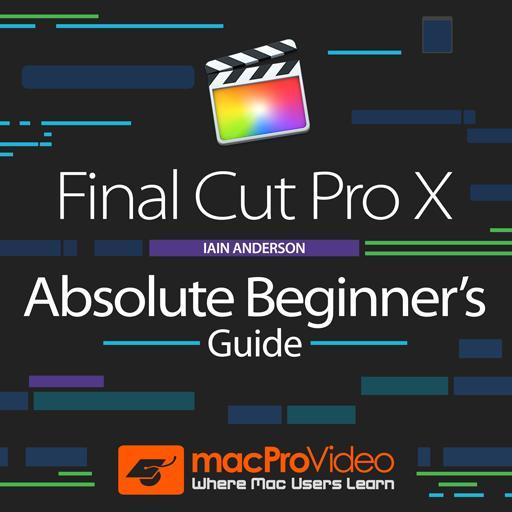