All Articles Recording & Production
Re-Amping With A Real Amp Vs. Plugins
Joe Albano on Wed, March 1st 0 comments
Language
Re-amping can lend grit, warmth and authenticity to any recorded sound, not just guitars. Joe Albano explains your options if you decide to go down the software or hardware route.

When recording electric guitars, bass and other instruments nowadays it’s common practice, especially in smaller studios, to take the instrument in directly (via a DI, or Direct Box) and apply any desired amplifier tone and distortion after the recording is already made. This allows for a lot more flexibility in the mix, providing the option to dial up key aspects of the sound while listening to those tracks in context of the full mix, after other parts have also been laid down and the arrangement is more fully fleshed out. This can be done in two ways.

The sound of the amp can be added via a modeled amp plugin, inside the box. Or the amp can be a real amp, out in the room. This latter approach is what’s traditionally referred to as “re-amping”- the already recorded track is pulled out of the DAW’s interface via a spare output and run through the real amp which is mic'ed up, and that re-amped mic signal is then returned to the DAW and the mix via another interface input. Let’s look at both of these approaches. 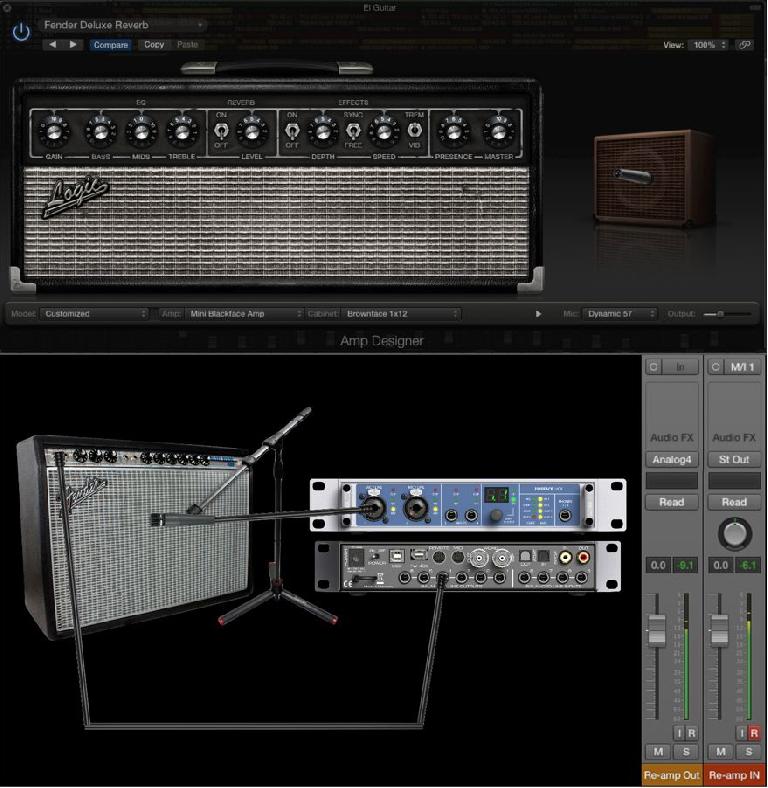 Of course the easiest way to add amp tone/distortion to an already-recorded clean instrument track is to use one of the excellent amp sim plugins available these days. Amp sims are virtual amplifiers simulated via component modeling; this is where all of a real amp’s internal components - the entire signal chain - are emulated in software, creating a virtual circuit path that responds just like the real thing would. The best of these respond dynamically to the performance, and while it may feel a little different to play through a virtual amp than through a real physical one live in the room, the sound of modeled amps can be entirely convincing in playback, especially in the context of the mix.

Working this way is usually pretty easy, but there are a few considerations that need to be taken into account. If the part is coming from a DI’d guitar or bass, the instrument needs to be plugged into an appropriate “instrument” input on the interface rather than a regular line-level input (even though they typically use the same 1/4-inch connections). The instrument input will have a much higher input impedance, which will ensure a proper voltage transfer from the guitar’s/bass’s output: most line inputs would result in signal loss and compromised frequency response. If the interface doesn’t have the correct Instrument-level input, then a Direct Box - a DI - will be needed. These range from simple, inexpensive models to more elaborate designs, with other features for live monitoring with a real amp. 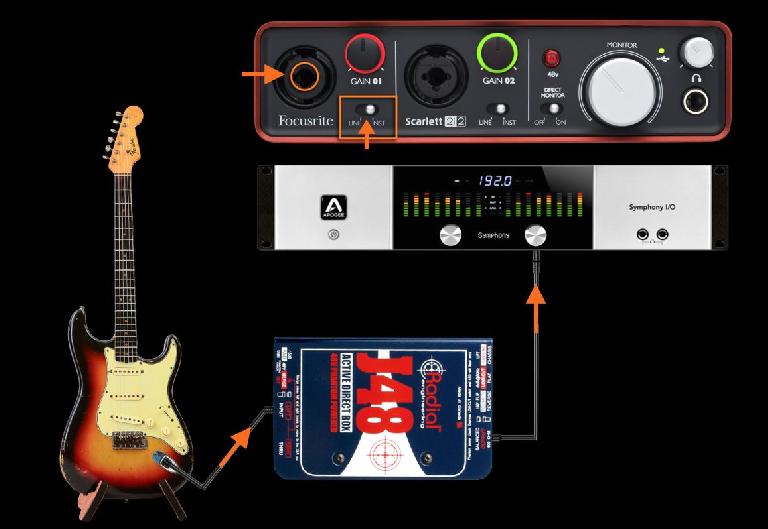 Once the signal has been recorded, then the mixer will want to make sure that the level of the track is properly calibrated to the incoming level expected by the particular amp sim plugin in use. Some plugins specify how to do this calibration but with others you may need to estimate, ideally using knowledge of the response of at least one of the real amps being emulated as a guideline.

Sometimes a producer or artist may want to utilize a real amp to re-amp the already-recorded clean, dry track. This may be to get the sound of a particular model not available in software, or just to add a bit more real analog vibe to the part. Now we’re talking about traditional re-amping. This is a little more complex to set up, but still easy enough, and many of the same concerns come into play. For traditional re-amping, the signal must be pulled out of the DAW, routed through the real amp, and then brought back into the mix on another track. Here’s how it’s done. 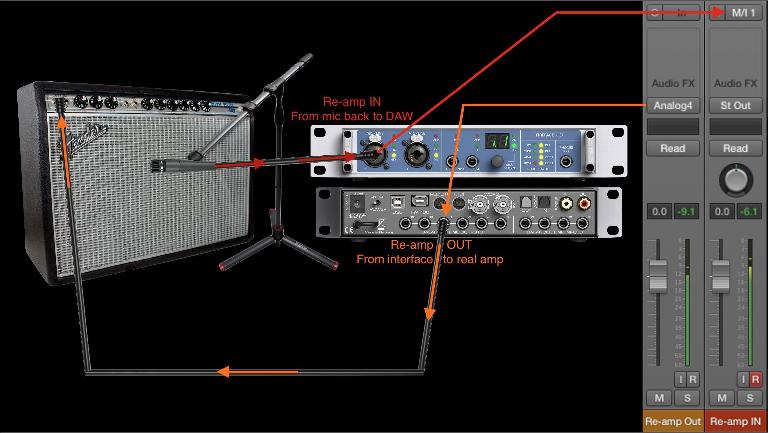 First off, you’ll need more than just stereo I/O on the interface - at least one extra output and ideally one extra input. The dry track to be re-amped is removed from the stereo mix and routed out a spare interface output. Naturally, this will be a line-level signal, which will be higher in level than a signal coming from an instrument itself, and it will also be expecting a lower input impedance at the input. A real amp’s input impedance will be a mismatch, and the hot signal level will be too quick to overdrive the amp (especially the preamp stage), and this will likely result in a tone and distortion quality that’s not representative of the amp’s true character, which defeats the whole point of re-amping this way.

You could simply lower the level of the outgoing signal in the DAW’s mixer, but the better solution is to employ a dedicated ReAmper box (kind of a reverse DI), which will match the level and impedance of the audio and amp input, for a proper transfer. The amp will see a signal that looks like it’s coming from a live instrument and react as it should, providing its best sound, along with the appropriate range of variation available from the onboard gain and tone knobs. 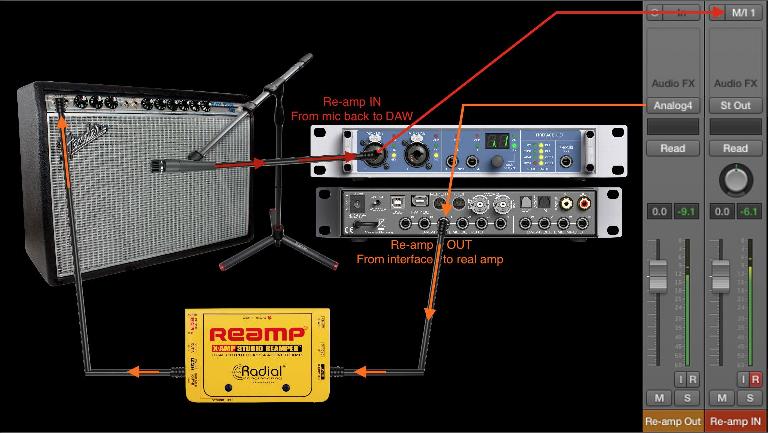 Re-Amping with a dedicated reamp box

Once the desired sound is dialed up, the amp is mic'ed up just like in any live session and the signal is brought back into the DAW via any spare mic input and recorded on a separate track. Now the re-amped track can either replace the original dry DI recording, or the two can be mixed together (especially common with electric bass), with the amped track providing the grit and tone, and the DI’d track contributing some extra punch and clarity.

There is anther technical aspect of this process you should be aware of. As most people know, signals going in and out of a DAW interface are subject to at least some degree of latency. Latency is the short delay that occurs as the signal passes though the interface’s A->D (recording) and D->A (playback) converters and the input and output RAM buffers that are used to optimize for hard disk recording and playback. While modern interfaces and computers may allow this user-adjustable setting to be set to very low levels (less than around 10-12 milliseconds down to as low as a millisecond or two), there’s always some latency present.

In real-world re-amping, the signal will be subject to both playback latency as the audio exits the DAW, and recording latency as the mic'ed-up amp signal is returned to the mix. This can manifest itself in a couple of ways. If the latency is high enough (more than around 10 milliseconds or so), the re-amped track might not sit the same way against other tracks, timing-wise, as the original DI’s recording. Even though this will most likely be a matter of musical feel, rather than musical timing, it may require the mixer to advance the region by a few milliseconds to restore the original tighter timing.

If the re-amped signal is combined with the original DI’d track, then even very small timing differences can potentially be problematic. Phase cancellations between the original and re-amped parts, even if only a millisecond or so, may compromise the tone of the combined sound, once again requiring an adjustment to the new track to compensate for the additional latency introduced by the re-amping process.

This adjustment is easy enough to make. If you zoom in enough on the two tracks, one on top of the other, you should be able to see any latency in the re-amped version, which can then be advanced either by editing or a negative setting in a sample-delay plug-in. 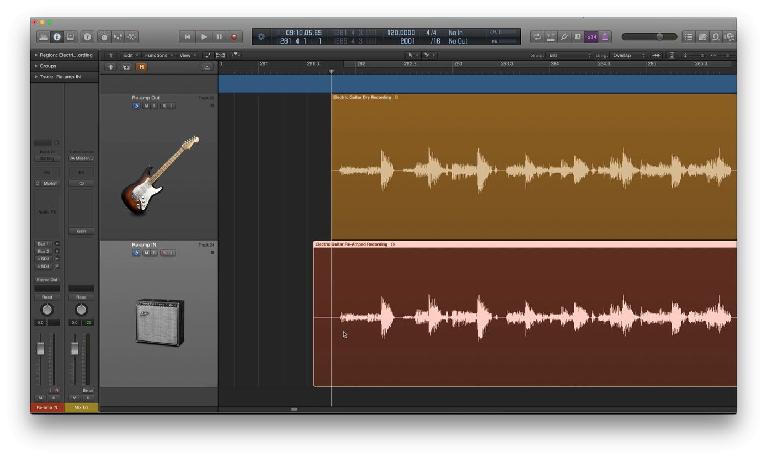 Adjusting a re-amped track to compensate for latency

Not just for guitars

As I mentioned earlier, re-amping is not just for electric guitars or bass. Sampled keyboards or other instruments can also often benefit from being run through an amp, either real or virtual. Even vocals can be run through an amp, for a distorted, band-limited effect, kind of like the classic telephone-voice effect on steroids. Some engineers like to take a snare drum track captured with a close mic on top, with its characteristic dry, midrange thunk, and effectively add a bottom mic on the bright buzzy snares after the fact.

One technique involves sending the snare track through a small speaker placed on the top head of a snare drum, and mic'ing up the snares on the bottom. The resulting buzz and extra ambience can be much more natural and dynamic than simply adding high-frequency EQ to the top mic, or using sample replacement software. Another cool trick might be to send the typically overly dry and dead signal from a DI’d acoustic guitar track recorded from the instrument’s onboard piezo or magnetic pickup out to a small speaker mounted in or pointing into a real acoustic guitar’s sound hole, and then mic up the resulting resonance, mixing the new track in at an appropriately subtle degree with the original recording, adding in some much-needed body and fullness.

Nowadays, most of what I’ve described here can be done entirely in software as well as via real, physical re-amping, but sometimes that brief foray outside the box back through the real world can add a little something more than what you get with ones and zeros. At the very least, if you have suitable gear and space for the setup, it’s certainly worth a try! 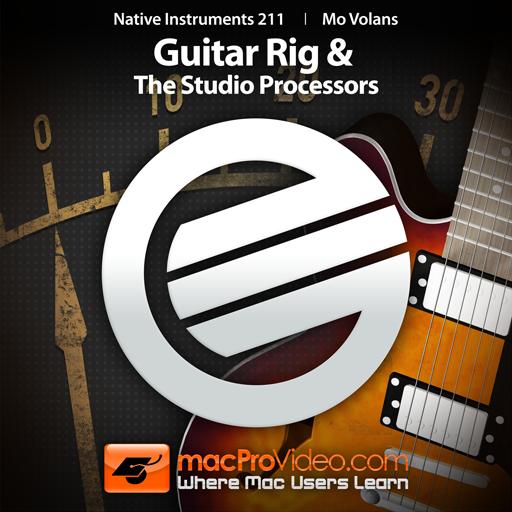 Dream It. Do It.
Do you want to learn Guitar Rig and The Studio Processors?
Yes, I want to learn!
No Thanks, I just want to read the article.
Feedback
How are we doing?
We'd love your thoughts, feedback and questions regarding our new site. All feedback is appreciated!
We do not respond to this form! If you need support, please visit our support page.
Thank you for your input!
Your message has been successfully sent
Course Advisor
Don't Know Where To Start?
Ask A Course Advisor