All Articles iWork
Making an iPhone shopping list using Apple Numbers
Francesco Schiavon on Tue, July 8th 0 comments
Language
With this tutorial you'll learn how to make a shopping list spreadsheet for your iPhone. Sounds useful? Then dig in and find out how!

Why would you want to make a shopping list using Numbers when you can just download an app from the App Store? Well, why not? At least for me I rather take on the challenge to learn how to tame Numbers than the challenge of browsing the App Store until I find an app that I would use more than once or twice.

The objective is to make something simple to use, especially when you're at the store or supermarket and don't want to stop halfway through an aile holding shoppers' traffic. That would be the main objective. The second objective is to create something you can quickly edit to add new items and delete the ones you don't need.

In a nutshell, I want a shopping list that I can tick really quickly while at the store (think of being in the supermarket getting your groceries). On the other hand we'll take advantage of the the flexibility of using your mouse and the full features of Numbers on the Mac to create the spreadsheet; then use iCloud to get it across our devices.

The spreadsheet needs to be fairly specific so that it fits well on your iPhone screen, and still, you can read it and tap on items without much fuzz. When we're using the shopping list we'll be able to tap on checkboxes to tick the items we've got as we find them in the store. 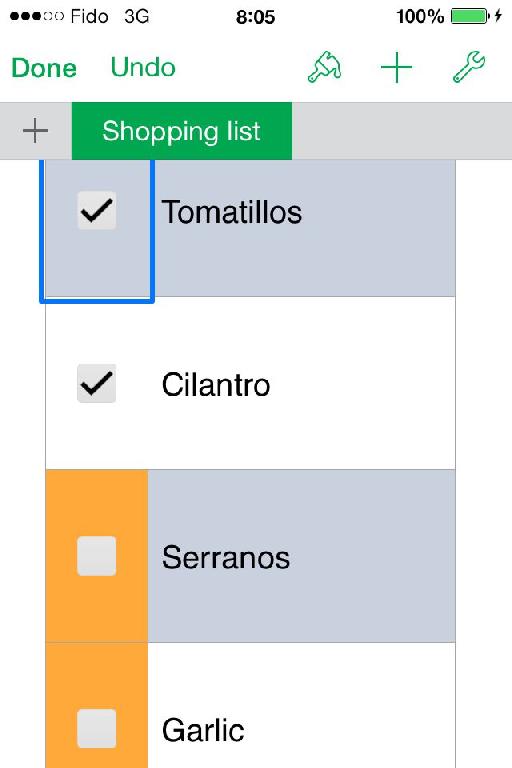 In fact, the document itself has nothing special, but the table benefits from a number of specific characteristics.

We'll create the spreadsheet on the Mac but it's meant to be used on the iPhone (or iPod touch).

From the template chooser, select "Blank" from the Basic group. This will create an empty worksheet with one table. With the table selected, disable the Headers and enable Alternating Row Color from the Table Inspector. You may want to make the alternating row color a tiny touch darker.

We only need 2 columns, one for the checkmarks and another for the actual shopping list, so reduce the number of columns by grabbing the handler on the right of the table and pushing it to the left until you only see column A and B. 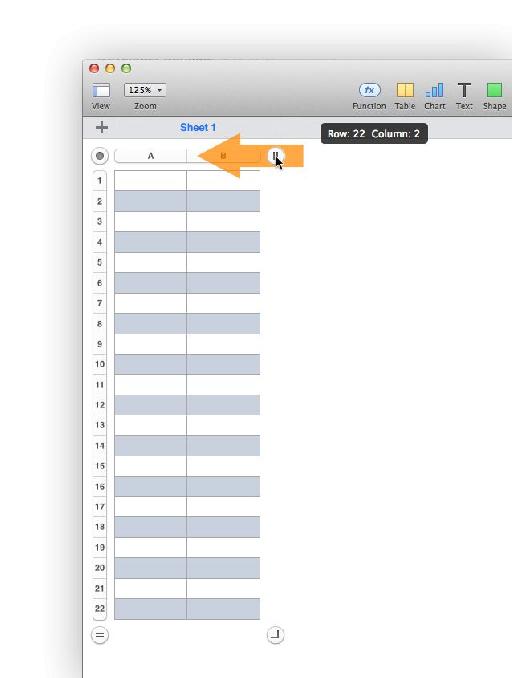 We'll make the rows and columns fairly large so they're easy to read and to tap when it's on the iPhone. With the table selected, in the Table inspector disclose "Row & Column Size" and enter 54 pt in the Row field. This will make each row much taller, making the table easier to read and specially easier to tap. 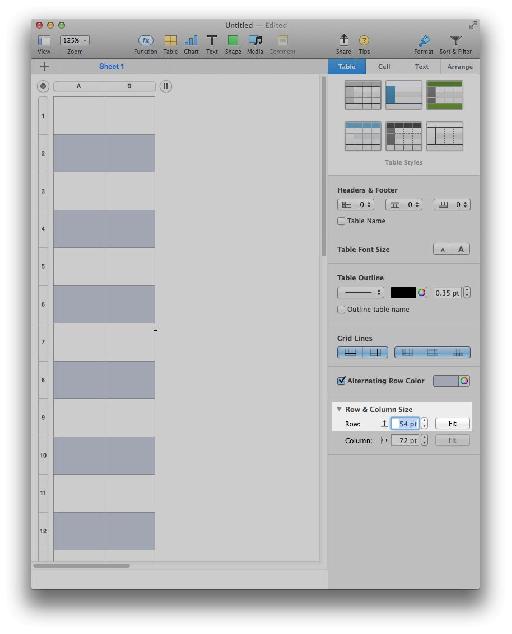 For the columns, we'll deals first with Column A, so go ahead and select the whole column A by clicking on the "A" label. In the inspector, let's change the column width to 32 pt. For Column B, select it and make it 96 pt wide. 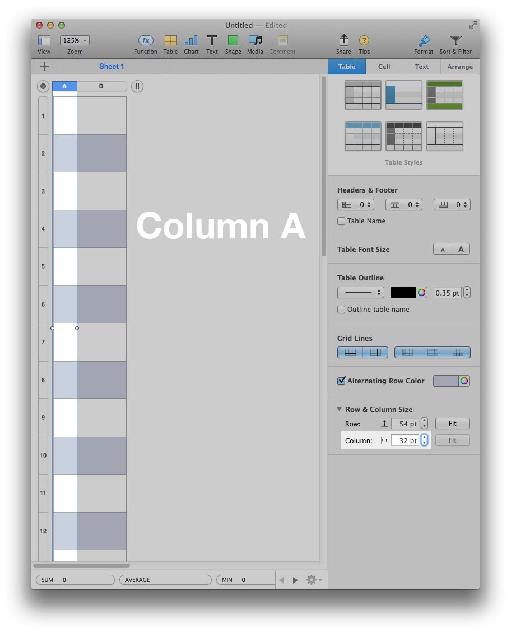 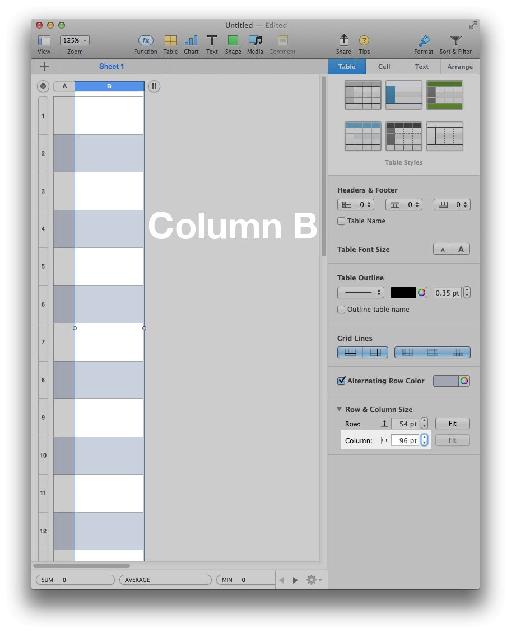 By now column A has a small width where we'll fit a series of checkboxes, and Column B is both wide enough to fit on an iPhone screen and tall enough to go into 2 lines if needed.

Time to make the spreadsheet functional. We'll add the checkboxes so we can tick items as we get them, and we'll make the cell color change to quickly spot the items that we still need to get/buy.

Let's work on Cell A1, so go ahead and select the top left cell. This will be the checkbox, so from the Cell inspector change the Data Format from "Automatic" to "Checkbox". The idea is that once we find an item in the store, we tick the checkbox, but we'll go further. We'll also change the background color to help us find the items that haven't been checked. For this, we'll use what's called "Conditional Highlighting". 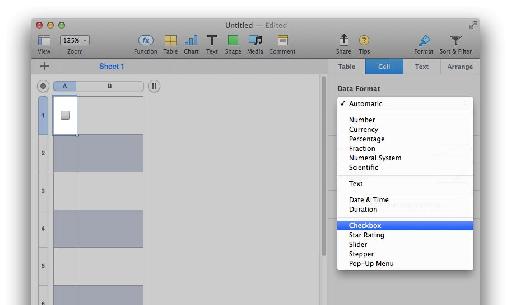 Still, with A1 selected and in the Cell inspector, click the Conditional Highlighting button. Then the "Add a Rule..." blue button. 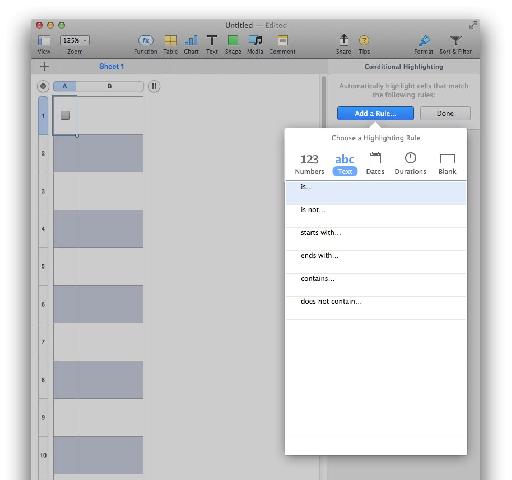 From the pop-up menu that appears, click on Text, and select where it reads "is..." and in the filed type "FALSE". Then, from the "Bold" menu that appears below the field, pull down and select "Custom Style". This should give you more formatting options, which I found a bit confusing. I found confusing that there are 2 color selectors, but the one on the left is for the text color and the one on the right is the cell background color. 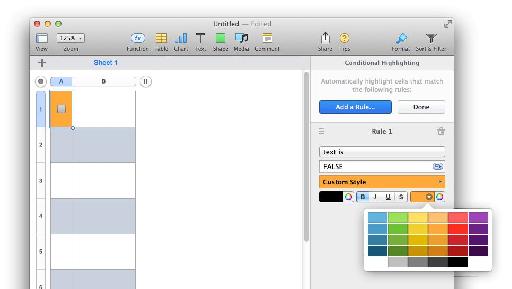 For the color selector on the right choose something bright that will indicate this item is still missing from your shopping list. Once you're happy with the background color for items that are unchecked, click the Done button from the Conditional Highlighting inspector.

Little funny (not) fact. This whole conditional highlighting feature is only available on the Mac. Not on iOS nor iCloud. On iOS it does change the format based on the conditions we set on the Mac, which is what we'll use on the iPhone. But on iCloud, it doesn't even show the formatting.

Now that we've got the conditional highlighting done, try it out. With the checkbox un-ticked, the background should be the color you specified in the inspector, and when you tick the checkbox, it should go to the normal background of the row. 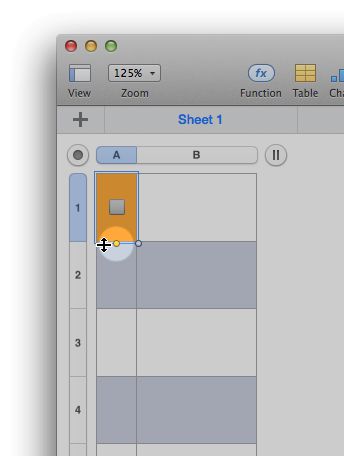 When you see the golden dot, grab it and drag down to auto fill down using the checkbox and conditional highlighting. 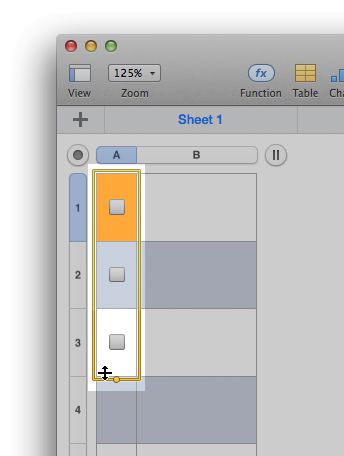 We're almost done. Apart from typing our actual shopping list, let's make sure the text is easy to read. Click on the label for Column B to select the whole column, then on the Text inspector make sure the vertical alignment is set to center. This will make the text line up with the checkboxes in column A. 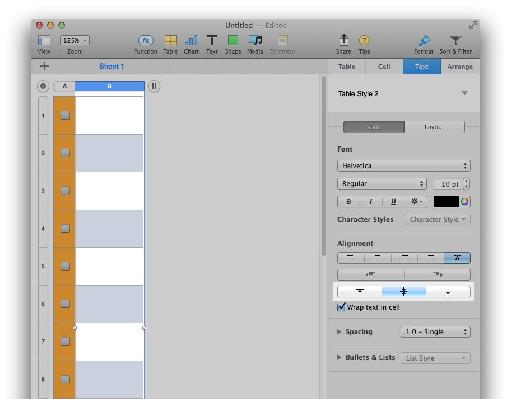 Now you can enter your shopping list. I rather do that on the Mac with a full keyboard but you could do it on an iPad or on your iPhone if you so desire. Just make sure your document is saved to iCloud so it syncs with your other devices. (If you don't have an iCloud account you can email the Numbers file to your iPhone/iPod Touch.)

To use the spreadsheet on your iPhone, open it and zoom in (unpinch) until it reads "Maximum". 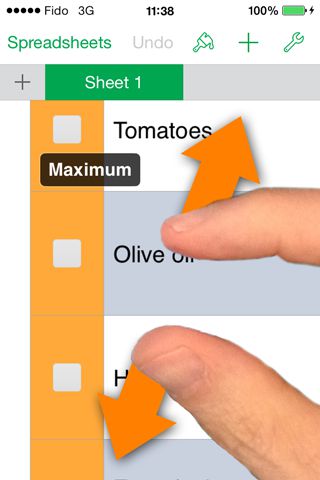 This will make the text and checkboxes easier to read and tap. Once you get an item from your shopping list, just tap the checkbox to put a tick on it and remove the conditional highlighting.

Francesco Schiavon
It all started with a TSR-80 in the late 80s. At that point it was more a toy than anything else. Since then, my interest in computers materialized with a PS/2 80 while I was in university in Mexico. Before I graduated I already had a couple of Macs, an LC-II and a Centris 660 AV, which was the catalyst to becoming an expert in both QuickTime and using the Mac. During my MBA, and later while attending the Vancouver Film School (VFS), I really learned to learn. Being a professional student at that point I started in the teaching realm as a Teaching Assistant, moving quickly to a part-time instructor position at VFS and soon after a full time position. Also while teaching, I've held a number of managerial positions for web development companies like Blastradius, Donat Group Inc. and later Rouxbe.com as well as working as a freelance consultant, mostly related to digital video deployment. My first tutorial for MPV was made soon afer the company started. Since then I've made a number of tutorials ranging from using OS X to advanced video compression techniques with Compressor and Adobe Media Encoder. Today I teach part time at the Art Institute of Vancouver, create courses for MPV and am always open for business as a freelancer.
Related Videos
Comments (0)

Dream It. Do It.
Do you want to learn For Mac, iPhone & iPad?
Yes, I want to learn!
No Thanks, I just want to read the article.
Feedback
How are we doing?
We'd love your thoughts, feedback and questions regarding our new site. All feedback is appreciated!
We do not respond to this form! If you need support, please visit our support page.
Thank you for your input!
Your message has been successfully sent
Course Advisor
Don't Know Where To Start?
Ask A Course Advisor