All Articles Logic Pro
Complete Beginners Guide to Logic Pro 9 : Part 1
Rounik Sethi on Sun, July 18th 17 comments
Language
How To Use Apple Logic Pro So you've just opened that shiny new Logic Pro or Logic Express box and spent the last 4 hours or so installing it on your Mac... what next? If you're completely new to

How To Use Apple Logic Pro...

So you've just opened that shiny new Logic Pro or Logic Express box and spent the last 4 hours or so installing it on your Mac... what next? If you're completely new to Logic and/or the world of DAWs (Digital Audio Workstations) then this beginners guide series is designed are for you!

At a glance you may find Logic's interface to be a bit intimidating. Even if you are well versed using it's younger sibling, Garageband, Logic is quite a step up... and it's complexity may take a short while to get to grips with. If you're anything like me, you're probably impatient to start creating music right away in Logic. In the first of this three part series, we're going to start from with the basics and work our way up. So let's take a look at how to create and record sounds using Logic's built-in software (virtual) instruments.

Launch Logic. If a project opens choose: File > Close Project. Now choose File > New...
A 'New from template' window opens. Here you can choose to start from a blank/empty file or use a variety of pre-made project templates. You can browse the different templates by clicking on a Collection folder.

For now, choose the Explore template and click on Empty Project. 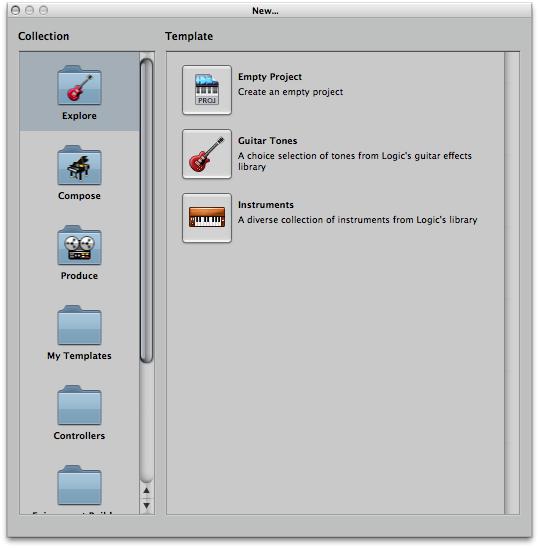 Every project in Logic must contain at least one track. A track is a lane that can generate or contain the sound for an instrument or one audio file. More on audio tracks and audio files in Part 2!

As we opted to create an empty project, Logic asks us to create at least one track before we can continue.

In the New Tracks dialog you can choose the number of tracks you wish to create. Let's stick to one for now.

Then the most important decision is the type of track you wish to create. This is an important decision and will be based upon what you plan to do in Logic. In Part 2 we'll be looking at recording audio from a microphone or a guitar plugged in to your audio interface... but for now we're going to create & record sound using Logic's built-in software instruments.

Make sure that "Open Library" is ticked and the choose Software Instrument and click Create. A new software instrument track is created in Logic's Arrange area.

You're very close now to playing with sound!

In the picture below you can see the Arrange area in Logic. This is where you typically arrange your musical creations.

On the left is the track header. Mine is called Inst 1. The empty lane to the right of the track header will contain your performances with the instrument on that track.

At the top of the Arrange area is the Bar Ruler. By default this displays the Bar Numbers and you can see the Beat lines too.

In the left area is the Inspector. You can toggle this using the I key on your keyboard. 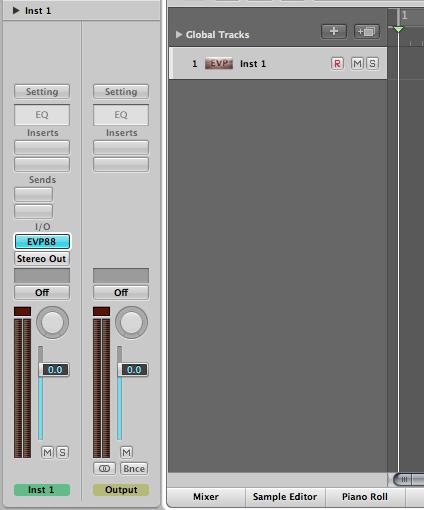 The Inspector is a context sensitive area... this means if you create and select another track in the Arrange area, the Inspector will update to show you the properties of the selected track.

In Logic a track is a layer on top of a channel Strip (those tall areas at the bottom of Inspector). A Software Instrument Channel Strip contains an Instrument in the I/O section. Here you can see I have an EVP88 instrument loaded as the input for the channel strip. The track is like a visual representation of the Channel Strip in the Arrange area.

If you don't see the EVP88 in your version of Logic, click and hold on the top slot in the I/O section of the left channel strip and choose EVP88 from the list. Then close the EVP88 window.

You can change the instrument on a track, change the output, levels and adjust it's sound properties, mute or solo the channel strip right here in the Inspector.

Time to make some sound! If you have a MIDI Controller plugged in to your Mac and already setup, then pressing a key will send a MIDI note event to Logic and trigger the EVP88 instrument which will then create sound.

If you don't, we have another solution. Logic has a variety of MIDI Editors that allow you to create MIDI notes and display them.... or even better Logic can transform your Mac's keyboard into a Musical keyboard.

Tap on the Caps Lock key on your keyboard and you will see a pic of your Mac keyboard showing which keys are mapped to the white and black keys of a piano.

Make sure the EVP88 track/channel strip is selected and press on a key to generate sound!

Let's quickly record some sound on the Software Instrument track.

At the bottom of Logic's interface is the Transport. Like a CD Player or Tape player the Transport contains buttons to enable you to play, stop, pause, rewind, fast forward and Record. In fact it can do a whole lot more... but for now that's all you need to know.

When you click on the Record button it will turn Red and the long vertical line (playhead) will move from left to right along the Arrange area. You may also hear a metronome (click track) while it moves to help you record your performance in time.

While recording play some notes on the MIDI Keyboard or the Caps Lock Keyboard. Once you're done press the Stop button.

You'll notice that a region (rectanglular area) has been created in the Arrange area on the track's lane. This contains the MIDI notes of your recorded performance.

You can double click on the region to look inside it. The Piano Roll Editor will open at the bottom of the Arrange area and you will be able to further edit and manipulate the recorded MIDI note events.

Logic comes with a massive number of instruments, effects and presets (patches) that can be used  on Software Instrument Channel Strips. In the Media area on the right, click on the Library tab. This enables you to browse through the lists to find drum kits, pianos, guitars, violins, synths, electric keyboards, horns... you get the idea! Simply click on a setting to choose it and then play some notes to hear the difference. 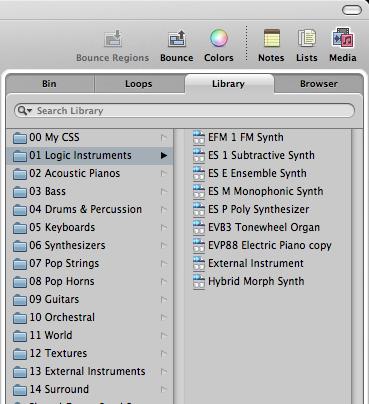 Because you recorded MIDI Note data and not the actual sound of the EVP88 instrument, your recorded MIDI region will trigger any software instrument you load onto the track! Try using the transport buttons to play the region using different instruments!

The Golden rule of computing.. Save! It's always a good idea to save your projects:
File > Save as...

In Part 2 of the Complete Beginners Guide to Logic Pro 9 you'll learn how to setup an audio track and begin recording audio.

Rounik Sethi
Rounik is the Executive Editor for Ask.Audio & macProVideo. He's built a crack team of professional musicians and writers to create one of the most visited online resources for news, review, tutorials and interviews for modern musician and producer. As an Apple Certified Trainer for Logic Pro Rounik has taught teachers, professional musicians and hobbyists how to get the best out of Apple's creative software. He has been a visiting lecturer at Bath Spa University's Teacher training program, facilitating workshops on using music and digital media tools in the classroom. If you're looking for Rounik, you'll most likely find him (and his articles) on Ask.Audio & macProVideo.com.
Related Videos
Comments (17)