All Articles Logic Pro
Create Interesting Drum Patterns in Logic Pro's Hyper Editor
Gary Hiebner on Thu, July 28th 1 comments
Language
The Hyper Editor is one of Logic Pro's most under-used editors. It really shouldn't be. Check out how to build a very capable Hyper Set which makes programming and editing drum patterns easy and fun. 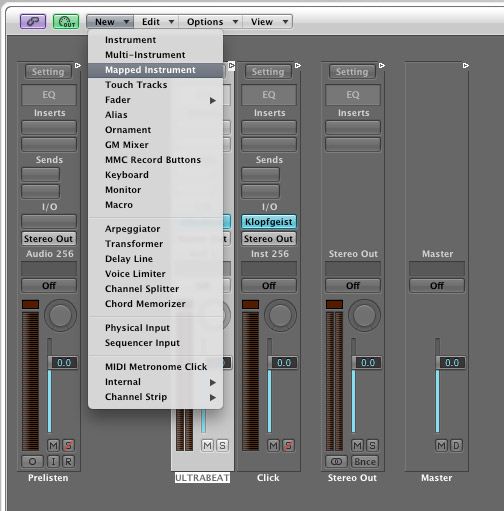 Now cable the Mapped Instrument to the Ultrabeat Channel.

Logic will display a window asking, "Do you want to remove the channels port setting?". Select '˜Remove'. 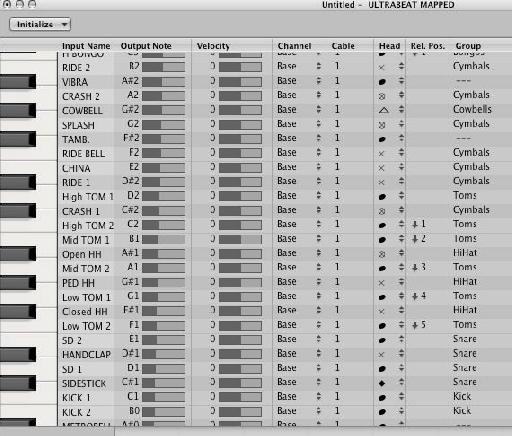 Go to the Arrange page. Create a new audio channel. Right-click this channel and navigate to Reassign Track > Mixer > ULTRABEAT MAPPED. Now the mapped instrument is visible from the Arrange page.

Draw in a region. Double-click this region to open it in the Piano Editor. I want to find the drum sounds I wish to use in the Hyper Editor. Draw in the sounds you'd like to use with the pencil tool (Esc, 2) on the Piano editor. As you can see the names for the Mapped Instrument are on the Piano Keys on the left now. 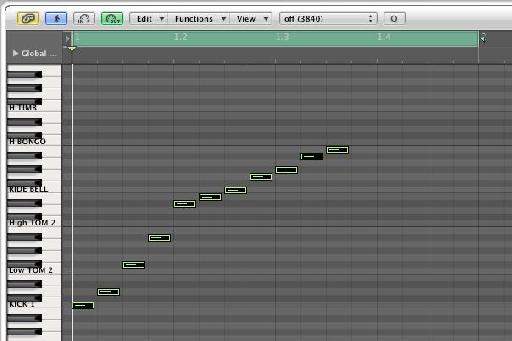 Select all these notes (Cmd-A). Next I will build a Hyper Set using these selected notes.

With the notes all selected, move to the Hyper Editor window and from the local menu choose: Create Hyper set for Current events. This will populate a Hyper Editor window with the selected notes you chose. You will see that the drum sounds are also named as they were in the mapped instrument. If you wish you can go in and change the names, but I will stick with the default names given for now. 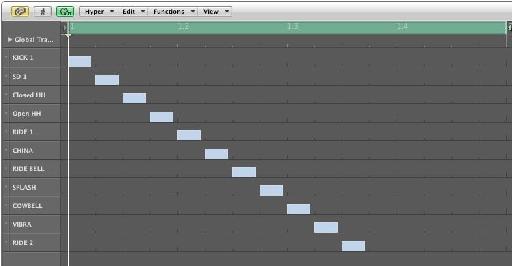 Use the pen tool to draw in some Kick and Snares hits. You will notice that when you draw in the note you can also draw in the velocity amount by the height of the note.

Here is the audio of a simple Kick and Snare pattern:

Let's fiddle with the Hi-Hats. Go to the Hats lane and change the grid length to 1/64 and change the pen width to 1. Now draw some notes and notice what strange hi-hat patterns you can make up. With these fine grid lengths, quite radical patterns can be achieved.

Here is the audio of the Kick and Snare pattern, with the added Hats:

Let's do a similar exercise with the ride cymbal. Go to the Ride lane in the Hyper Editor window and change then pen width to 1 and the grid to 1/96. Draw in some crazy patterns. Notice what interesting drum timbres you can get by experimenting with the grid. With such small notes, the drums almost become notes with pitches when you create these fast drum hits.

Here is the audio of the Kick, Snare, Hats and Ride:

Much fun can be had with drums patterns in the Hyper Editor. This is just a quick example of what is possible. If you spend time picking the rights sounds and drawing in interesting grid patterns, you can come up with some very interesting drum grooves.

Added with the ability of being able to draw in your velocities so easy really makes it a helpful tool to master.

Take a look at the macProVideo.com Logic 303 TNT 2 and Logic 304 TNT 3 tutorials to see what else you can take advantage of in the Environment and other unsung areas of Logic.

Gary Hiebner
Gary Hiebner is an enthusiastic South African Sound Designer and Apple Tech Head! Gary has been involved in the South African music industry for the decade, and in this time has also been involved in the sound design and music production for many advertising agencies and media houses. Gary is a devoted Logic and Ableton user, but he also dabbles in Cubase, FL Studio, Studio One and esoteric sound design tools, such as Max/MSP and CSound.
Related Videos
Comments (1)