All Articles Logic Pro
Creating Side Chained Grooves with Logic Pro's Tremolo Plug-In
Darren Burgos on Mon, June 16th 0 comments
Language
If you think you already know everything about side chaining to create grooves in Logic Pro, think again! Darren Burgos shows how the humble tremolo can be used in a groovy way.

Many of us already know how to send a kick sound through a compressor (via a side chain menu) to create a nice pumping feel on your bass lines and other sounds. If you don't, basically the source from the side chain (often a kick) triggers the volume compression on the sound being effected. Every time the kick hits, the volume is reduced momentarily creating a movement in amplitude. This whole process can be somewhat time consuming, and will often disrupt your flow of creativity when having to stop and set this up. In this article, I'll show a super quick method for attaining that side chain groove feel without the lengthy set up, and without using any side chaining at all.

Step 1 - Open a Song to Experiment With

Open a song with a synth or bass you'd like to put some groove on. In my example I put a quick song together with some Apple Loops a synth and an Ultrabeat. I'll be effecting a top synth part, and a bassline. 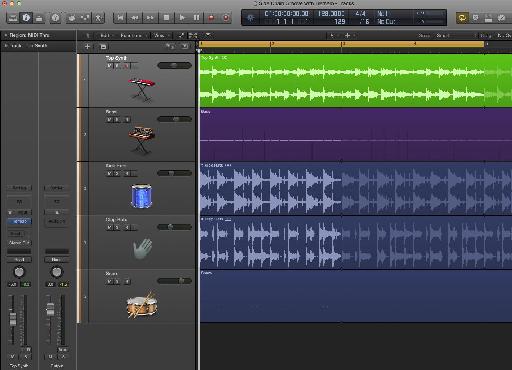 First I want to process the top lead sound in my example song. From the Modulation Audio FX menu, choose the Tremolo effect. Normally this effect is used to create cool sounding panning or gated sounds when the rate is set to sync. Tremolo is basically an LFO with a shapable wave that can effect the left or right channel's volumes either independently or in sync. 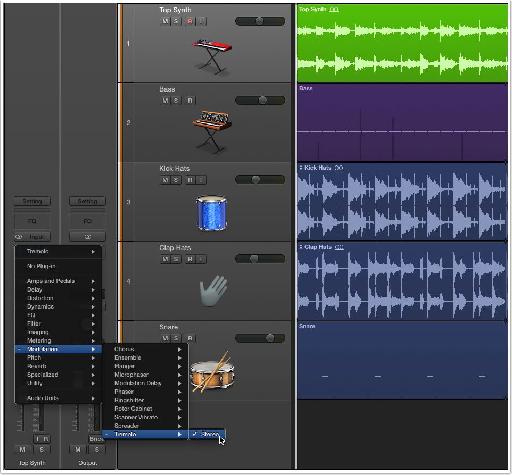 Leave the rate set to 1/4 notes so the effect happens on every beat. Also leave Symmetry and Smoothing set to their default values. So both the L and R stereo sides stay in sync, change the Phase to 0 degrees. Also pull the Depth value down to around 80%. This setting should give you a nice pumping sound as is, but try adjusting some of the other parameters too. The Symmetry and Smoothing allow you to 'shape' the waveform'¦ these are a must when working at slower tempos because they allow you to fine tune the volume slope as it moves up. 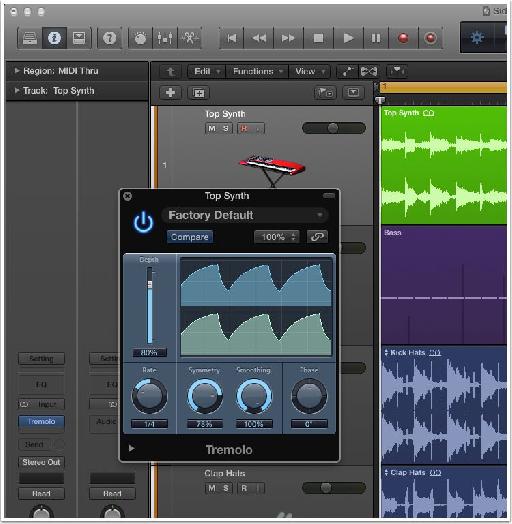 Now I'm going to process my bass sound with Tremolo. Again, leave the default settings on Rate, but now also leave the Depth set to its default 100%. Just like on the lead sound, set the Phase to 0. Try setting both Symmetry and Smoothing to around 70%. This is seriously 'to taste' because'"again like the lead'"different tempos will require different slope shapes to nail the groove just right. Now click the small disclosure triangle in the black area at the bottom of the plug-in. This opens the Offset parameter that allows you to nudge the groove forward or back in time! I chose a value of -20'¦ this seems to slide up the volume perfectly in my song set to 128 BPM. 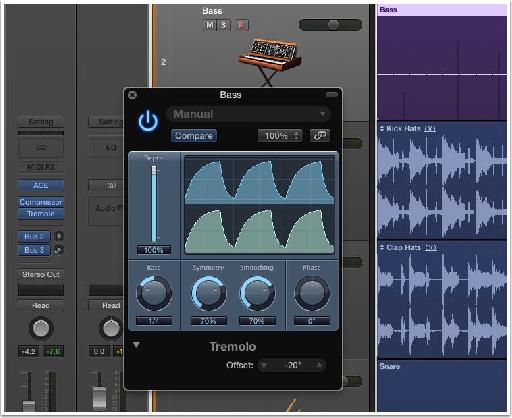 I hope this tip helps you speed up your production flow as much as it does me. Thanks for reading! Here's a before and after example. First the unprocessed song (drums play, then bass, then lead, then both together). Then the version processed with Tremolo. The whole example is slightly over a minute so give it time: