Apple’s recent incremental update of Logic, version 10.2.1 (the current version is now 10.2.2), turned out to be more than just a minor bump—it contained a significant number of fixes and new features. Among the improvements was a makeover for quite a few of the classic Logic plug-ins. The graphic update gave them a nice, crisp Retina-ready look, a welcome change for the somewhat tired old blue look of these legacy plugs. But in many cases the makeover was more than just new, snazzy knobs and a smart background—a lot of the updated plug-ins have had their control surfaces rearranged considerably, and for some of the more complex effects—like AutoFilter and the two classic Logic Delays, Stereo Delay and Tape Delay, for example—the new layout makes it much easier to get a handle on the inner workings of the effect—a very welcome improvement in workflow and accessibility.

But besides the graphic bump, quite a few of the updated plug-ins also had features updated or added (and in a couple of cases even removed). For anyone who’s curious about what’s different, I’m going to take a quick tour of these updated effects—I’ll briefly go through the ones with minor changes, and then focus primarily on the few that had more significant work done.

Not just a pretty face

To start with, here’s Apple’s complete list of the plug-ins that got the makeover:

Fig 1 Some of the plug-ins that received a makeover in Logic 10.2.1

All of these got the new look, and for some that’s pretty much all they got—functionality remains unchanged, though a number of them have had controls that were previously hidden (in those little drop-down panels at the bottom of the plug-ins) brought out into the light of the main control surface, and a few have also had a new control slipped in here and there.

The Gain, Single Band EQ, Enverb & Silververb, Ensemble, Tremolo, Spreader, Binaural Processor, Test Oscillator, and Klopfgeist (the metronome sound) all fall into that general category. Silververb got one new control—a modulation toggle, while Enverb’s display is now editable by dragging the control points on the envelope graphic. Tremolo got a similar treatment—a much clearer, editable version of the graphic display of the mod waveshape—as did Ensemble.

The Flanger, Phaser, and Microphaser plug-ins all had LFO Sync added—it’s always useful to be able to sync modulation to Tempo for any effects, so this is a welcome addition. Phaser now also provides a choice of different “Sweep” modes—Square and Exponential.

The Distortion plug-ins all got new, sometimes editable (BitCrusher and Clip Distortion) graphs, which provide a much clearer sense of what effect the current settings are having. New names clarify the method of digital clipping employed for the clipping Modes in BitCrusher, and Overdrive now has the same convenient Level Compensation feature as Distortion, which makes it easy to quickly dial up overdrive on the fly, without the overall level going off the chart.

Logic’s Compressor had previously gotten the full Hollywood treatment, but the Limiters have now also been given a little love as well. Logic has two Limiters, the Adaptive Limiter—a brickwall Limiter intended for Mastering duties—and the regular Limiter, which has always been more of a traditional analog-style limiter. The Adaptive Limiter has a completely new layout—gone is the Input trim control (I guess Apple figured if this is intended to be used as a Mastering limiter, the mixes you’d be mastering should have already taken care of that!), and in its place is a gain reduction meter, always helpful. The rest of the features are the same, just brought up from the drop-down panel to the main window. The Inter-Sample Peak Detection option has been renamed True Peak Detection—it’s the same function, it still detects inter-sample peaks, but the various regulatory bodies that have established current broadcast standards for maximum average and peak levels have bestowed the catchier “True Peak” moniker on this measurement, and Apple has adopted their terminology.

The more traditional Limiter has also gotten both a graphic bump and a new feature—a Precision limiting mode has been added to the classic Legacy mode. Legacy is the more “analog”-like mode, with a soft-knee option, while Precision is more of a hard-limiting design.

Both Limiters benefit from Logic’s extending its Plug-In Delay Compensation to include the meters, keeping them in visual sync with plug-ins (like AdLimiter) that have a lot of Latency, and avoiding the distraction of the metering not following the audio closely enough.

AutoFilter has seen a number of enhancements.

Fig 3 The new look and added features of AutoFilter

There’s a much cleaner physical layout, with all the different sections’ controls more logically grouped, and convenient Bypass switches for each individual processing section (Filter, Distortion, Envelope, LFO). The envelope controls have been replaced by an editable graphic, and there have been several changes to the distortion functions. There are now three Distortion Modes—Classic, Tube, and Scream, each of which has its own character—and a different mode can be selected for input and output distortion, with separate Pre- and Post-Filter distortion level controls. There’s also a new (4th) State Variable Filter type—a Peak Filter.

Personally I’d never gotten into AutoFilter much, I found it a bit dense, but after a brief interval with this new version, I was happily chugging away at it—I particularly liked the new distortion modes, each of which brought its own distinct character to the table, and the new Peak Filter is now also a favorite, adding some nice honk to mellower sounds. All in all, this almost feels like a new effect—definitely one of the best of the new lot.

Delay Designer is the undisputed king of Logic’s Delay arsenal, but it can be a bit daunting, and often feels like it’s more suited to crafting fancy delay patterns than quickly implementing more basic delay effects. Stereo Delay has always been more accessible when it comes to simple delay effects like doubling and echo, and Tape Delay has always done a very nice job of emulating the warmth of classic analog tape-based and bucket-brigade style delay devices, so I was pleased to see a few nice additions to those go-to effects.

Both delays now have a much more comprehensive menu of Tempo Sync (formerly Beat Sync) delay time options, now including dotted and triplet values without having to use the Deviation (formerly Groove) control to get those in-between delay times. There’s a new menu of routing presets, to make quicker work of setting up panned, ping-pong, or crossfeed delay effects from scratch. There are also now separate filters for the two delay lines, a Stereo Link button which preserves different left/right settings, and you can even dial up delay times in milliseconds with finer values.

Tape Delay got the same improvements to Tempo Sync delay time options, plus—like AutoFilter—a much more accessible layout. There are also two different Tape head modes—Clean and Diffuse—to enhance Tape Delay’s simulation of tape artifacts. I’ve always felt that Tape Delay was like Compressor—if it had a skin to match its capabilities, it’d be much better known and loved for its warm, fat vintage-sounding delay and echo effects—and while its new look is not as fancy as Compressor’s, it’s a nice improvement, and I’m glad to see it’s gotten the additional features to boot.

Lovely Logic meter made... better (with apologies to the Beatles)

Finally, Logic’s Metering plug-ins have been given a worthwhile overhaul, as part of the new makeover. The new look is a big improvement—the more colorful level meters are easier to read at a glance, and more configurable as well, and the spectrum analyzer has better resolution (63-band added to the original 32-band display). Just as with the meters in the dynamics plug-ins, all the meters here benefit from being included in Logic’s Plug-In Delay Compensation, which I explained, above. Since all the functions of the Correlation Meter and the Level Meter are included in the full-featured MultiMeter, I’ll focus on that.

Both the Analyzer and the Goniometer displays are much improved, but the biggest changes are to the level Meter. As before, there are options for it to show either Peak levels, RMS (average) levels, or both together (Peak & RMS), and the options for Peak and Peak & RMS that reflect inter-sample peaks are also still there, re-named (as above) True Peak and True Peak & RMS, reflecting current broadcast standards and terminology.

The level metering now shows RMS (average) levels and peak levels as separate bars in the display, which is easier to see at a glance, and the point at which RMS transitions to peak is now yellow, also much easier to see. In fact, you can now set that point—a feature called “Target Level”. The meter’s dB scale defaults to this transition (maximum average level) beginning at -12 (which corresponds to the highest average level currently recommended for music productions), but you can change it by dragging the Target Level Handle, and use a different setting as a guide for determining the average-to-peak ratio when mastering your productions—other unofficial standards for maximum average level are -14, -18, and -20.

As I mentioned, the broadcast industry now has much stricter, legally mandated standards for maximum average level, and Multimeter includes a second Loudness meter, to the left of the main Level Meter, to show this. Broadcast standards measure average level in Loudness Units, or LU, and MultiMeter’s LU meter shows readouts of two required industry measurements based on LU readings—LU-I (Integrated, which measures the average level over the course of an entire program), and LU-S (Short-Term, which measures loudness within 3-second periods). If you find yourself prepping audio for broadcast, you'll need these readouts when you submit the work, and now you have (many of the) tools you’ll need right in Logic.

So, Logic 10.2.1’s big plug-in makeover turns out to be more than just a cosmetic touch up—the improvements range from simple but welcome graphic and workflow enhancements, to really useful added features that may give new life to some old workhorses. If you haven’t gotten around to upgrading yet, it might be time... after all, you can’t really go wrong—remember, it’s free! 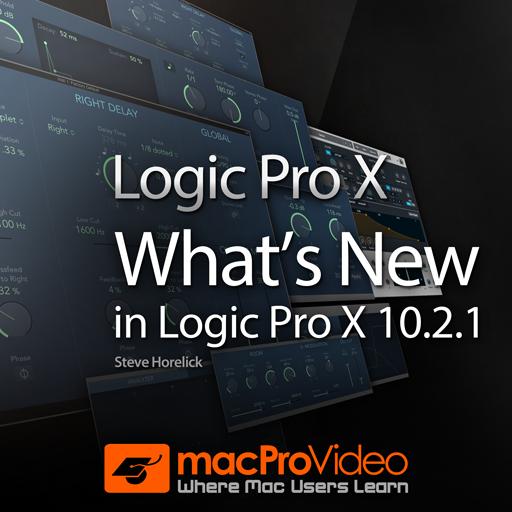 Dream It. Do It.
Do you want to learn What's New in Logic Pro X 10.2.1?
Yes, I want to learn!
No Thanks, I just want to read the article.
Feedback
How are we doing?
We'd love your thoughts, feedback and questions regarding our new site. All feedback is appreciated!
We do not respond to this form! If you need support, please visit our support page.
Thank you for your input!
Your message has been successfully sent
Course Advisor
Don't Know Where To Start?
Ask A Course Advisor