Plain stereo panning is one of the most basic things we do when mixing'"placing instruments and voices in various locations between the speakers can really help to open up a mix, enhancing clarity and depth, if done well. In Logic, there are a number of things to deal with when it comes to panning, along with plug-ins that affect positioning and stereo imaging, found under the category of Imaging. Let's take a look at some basic considerations. 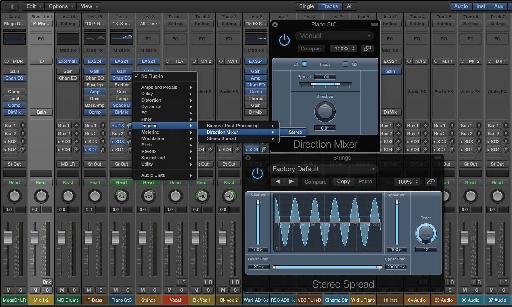 The most basic panning is, of course, done with the Pan knob (or Pan Pot) in each Channel Strip. Of course, you already knew that, in the physical world, 'Pan Pot' is short for 'Panoramic Potentiometer''"two volume pots controlled by one knob. But even this most straightforward application has some quirks in Logic, so let's start there.

Assuming a Stereo mix, mono Channel Strips have a classic Pan knob, which works as expected'"pan left (for example), and you feed more signal to the left speaker and less to the right, and vice versa. 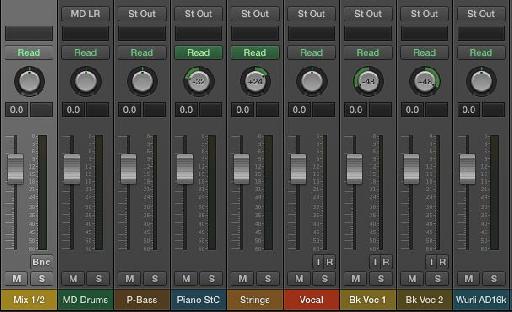 At center, the signal is at equal volume in both speakers, creating the illusion of being centered in the mix'"the 'phantom' center. All the way left or right is called 'hard panning', but, since most tracks in a mix have at least some level in both speakers, a hard-panned track will lack the subtle phasing that occurs in playback from having two physical sources for the same sound, and sometimes might not blend into the mix as well as it could. Many engineers will pan to about 90% left or right, or so, when they want a wide pan position.

But stereo tracks in Logic work a little differently. In a Stereo Channel Strip, the Pan knob is not really a panner, per se, but a Balance control. When you pan away from center, it doesn't shift the overall image to the left and right, as you might expect'"instead, it re-balances the left & right channels. While this does have the effect of moving the signal to the left or right, what's actually happening is that one side of the stereo signal is being reduced, and the other increased in volume. So, if you 'pan' all the way left, you'll be hearing only the left side of the (formerly) stereo signal, on the left, not both left & right squeezed together on the left, as you might expect. Having a Balance control is important for stereo tracks, but many times, what you really need is a true Stereo Panner, which will let you pan a stereo track to one side, maintaining the stereo field, though it will narrow gradually as you pan, until, at hard left or right, you'd have both channels, in mono, on that side of the mix, rather than only the left channel alone, which is what you get with Logic's stereo Balance knob.

This can be a gotcha with stereo tracks like strings or piano, where there may be more level from, say, high notes on one side, and low notes on the other. Attempting to 'pan' such a track toward one side of the mix will unintentionally change the instrument's balance, reducing the level of some notes, and increasing the level of others, slightly altering the balance and dynamics of the performance.

Some DAW mixers let you choose between having the 'pan' knob on a stereo channel strip function as either a Balance knob, as in Logic, or a true Stereo Panner, like I described above. Logic offers no such choice'"mono tracks have the Pan knob, stereo tracks the Balance knob. But you needn't reach for that third-party panner plug-in just yet'"Logic does offer true stereo panning, via its included Direction Mixer plug-in, found under the Imaging category. 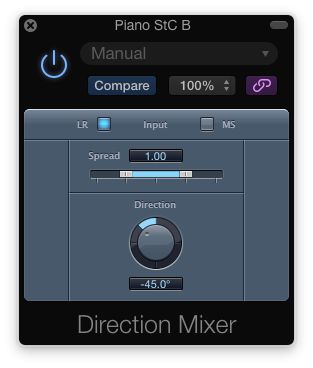 The Direction knob, at the bottom, provides true stereo panning, so now, if you pan that stereo piano track, say, all the way right, you'll be hearing both the left and right sides, in proper balance, in the right speaker, as you'd expect when mixing & panning stereo tracks.

But hard-panning (both L & R in mono) is reached at the -90Â° (left speaker) and 90Â° (right speaker) positions, not at the maximum left or right positions of the knob. As you turn past -90Â°/90Â°, the image will return to centered full stereo, but, at the full -180Â°/180Â° positions, the left and right channels will be reversed (left side of the track on the right, right side on the left).

As long as you know what to expect, the Direction Mixer gets the job done. It is a little less convenient than having a true Stereo Panner right there in the Channel Strip'"when you take a visual overview of your mix, you can't see, at a glance, how stereo tracks are panned without opening up a bunch of Direct Mixer plug-in windows'"but, other than that minor inconvenience, you do have full-function, true stereo panning.

The LR and MS buttons just let you select the correct setting for normal stereo recordings vs MS (Mid-Side) recordings. The Direction Mixer also has a 'Spread' slider, which widens or narrows the stereo signal: 1.00 is normal Stereo; lower settings gradually narrow the image, with 0.00 being Mono; and settings above 1.00 widen the image. This spreading can get a little diffuse'"it's more of a special effect, that might work better with sounds like strings and pads'"and, even though it seems ok, you'll always want to check mono compatibility when using widening effects like this.

The Law of the Pan

There's another aspect to Panning in Logic that you should be be familiar with: Pan Law. Pan law is a preference (actually, a per-song Project Setting here) that governs how the apparent level is affected when panning. When you pan a track to the center, it's coming out of both speakers (equally). But if you pan it to either side, it's only in one speaker. As you might expect, with only one physical sound source, the level you'll hear is somewhere between 2-6 dB lower than the level you hear from the centered track (there's no exact number here, due to variations in acoustics)'"most people have settled on 3 dB as the typical amount.

This is no big deal, if you panned something and the level dropped, you could just compensate with the channel fader, but in a busy mix with very precise track levels or lots of volume automation, experimenting with pan position could be inconvenient, unintentionally making slight, but possibly problematic, changes to the mix balance. Pan Law'"which you'll find under File Menu->Project Settings->Audio'"can compensate for this. With it off, you'll observe the behavior I just described. Switch it on, and the level will be unchanged as you pan left or right, eliminating any potential nuisance issues. Two choices let you decide exactly how this is accomplished: '-3 dB' reduces the level of the track (by 3 dB, of course) when it's panned center, and gradually increases it (back to Unity Gain) as you pan to the sides'"this is a typical application in the industry; '-3dB Compensated' leaves the track's level at Unity Gain when the Pan knob is centered, instead raising the level up to 3 dB as you pan to the left or right.

With identical Channel Fader levels, both -3 dB Pan Laws will give you the exact same mix, but the overall level will be 3 dB higher with the Compensated option. The gotcha can happen if you switch between either and no Pan Law (the '0 dB' option)'"then the balance between centered tracks and panned tracks will change slightly, depending on how wide the pan settings are. That's why Logic makes it a per-song Project Setting rather than a global Preference.

So, which Pan law is best? Most people would choose a -3 dB option (it's the default in most DAWs, including Logic), but Compensated or not? Well, if your individual track levels tend to run hot, up near the top of the meters, then -3 dB might be best for you. If you pan to one side with -3 dB Compensated, the level of that channel will increase by up to 3 dB, which, could potentially take you into the red (I know that's not such a big deal with modern DAWs, but it's still not good practice). Personally, I do use -3 dB Compensated, and have no problems.

Since I mentioned the Direction Mixer's Spread control, there's one more Imaging plug-in I also want to mention. We all know there are various ways to generate a stereo image from a mono one, like stereo doubling with wide panning, and phase-based processing tricks (which can be iffy, since the signal may cancel or sound nasal & thin if heard in mono).

Logic provides a safe way to create a nice stereo image from a mono source'"the Stereo Spread plug-in. This splits a signal into left & right, and then divides each side into several identical EQ bands. Complementary boosts & cuts are applied to the two sides'"so, if Left is boosted at, say 500 Hz, 2k and 8k, Right will be cut at those frequencies, and if Right is boosted at 1k and 4k, then Left will be cut at those frequencies, etc.. When heard in stereo, the signal will not be changed in tone (thanks to the complementary boosts & cuts), but will take on a wider image, thanks to the differences between channels. But if heard in mono, those complementary EQ settings will cancel, leaving the signal untouched, with no potential phase issues. It works pretty well'"have a listen to Audio Example 3. 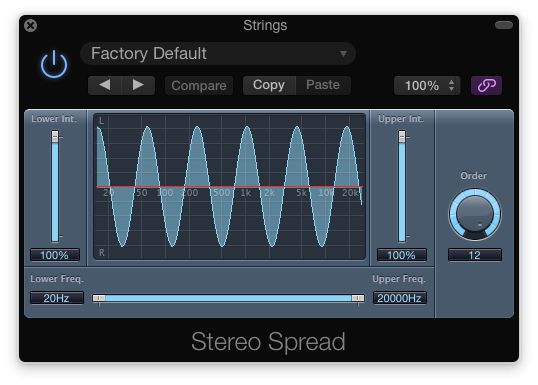 These panning issues and plug-ins may not be as glamorous as many other cool effects, but they're important to get right, to make sure Logic isn't fighting you when you sit down to mix. I hope this article helps...

Learn more about mixing and imaging with these videos at AskVideo.com.