All Articles Logic Pro
How to Set Up Logic's Vocoder
Rounik Sethi on Thu, March 10th 2 comments
Language
Vocoders have endured as a popular effect in many forms of music, and have been used by artists as diverse as Herbie Hancock, Stevie Wonder, Kraftwerk and Daft Punk.  Originally used in the 1930's to

Vocoders have endured as a popular effect in many forms of music, and have been used by artists as diverse as Herbie Hancock, Stevie Wonder, Kraftwerk and Daft Punk.  Originally used in the 1930's to encrypt voices and create secure radio communications, the vocoder became a creative music production tool in the late 50's in hardware form. Of course, much later on software vocoders arrived... and Logic comes bundled with it's own built-in vocoder, the EVOC 20 Polysynth.

Although commonly used to process voices, there's every reason to use a vocoder on other sounds in your songs. In this Quick Tip we'll explore how to setup the Vocoder in Logic and use it to process a drum part. 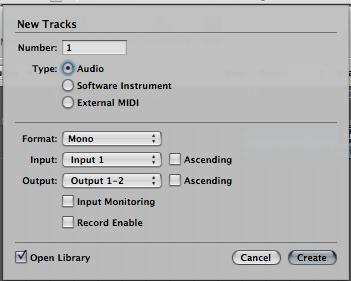 This will be the source for our vocoder. You may like to record / place a recording of your voice on this track. For this example I'm going to choose an Apple Loop, "Analog Drum Machine 86" and place it on the audio track.

Listen to the dry drum loop:

Next, create a Software Instrument track, click-hold on the Instrument slot (on the track's Channel Strip) and choose the instrument: EVOC 20 Polysynth > Stereo 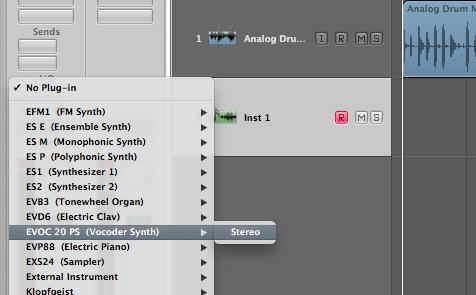 We need to set the source audio which will be vocoded. In the top right of the EVOC 20 click on the Side Chain pop-up menu and choose the audio track.

From the presets menu I've chosen 02 Vintage Vocoder > Deep Modulation to get started.

Finally, make sure that the signal type in the EVOC20 is set to Voc (also in the top right of the interface).

If you want to apply your vocoder to an audio input or audio region in real-time, then now would be the time to hit play in Logic's Transport and begin playing notes on your MIDI Keyboard.

For this example we'll process the audio offline, so create a MIDI region by right-clicking on the empty track lane of the EVOC20 track and choosing "New MIDI Region". Next double-click the region to open it in the Piano Roll Editor and draw in some random notes.

If you hit play in Logic's Transport now, you'll hear the original drum loop and the processed vocoder drums together:

To hear only the vocoded drums either set the Drums channel strip's output to No Output. Alternatively mute the track (or it's channel strip if Track Solo/Mute mode in Preferences are set to CPU-Saving).

And that's all there is to setting up a vocoder in Logic. Here are some further examples of the vocoder in action using different presets in Logic 9 (all with the original drums muted):

Now you can experiment and have fun with the vocoder and don't forget to drop us a comment below with any questions!