All Articles Mac OSX
Staying Organized: Why you should be looking at Google Tasks!
G.W. Childs IV on Sun, March 13th 0 comments
Language
Let's face it, we all get bogged down. I'm not talking about little, "Oh, I forgot to do this one 5 minute errand..." I'm referring to more of a "%&*^$, If I don't get this finished in the next tw ...

It can get ugly.

And to make things a little more of a challenge, us artistic types are not known for our ability to organize, manage our time, and follow any regular routine.

I myself am guilty of all the above, but as I've gotten older, I've had to adapt with different tools, usually software. You know the type, it sends you a reminder here, there and everywhere, but you still never get anything done?

Tired of spending money on such failures, and also just having more lint in my pockets than change, I decided to get creative recently and look for what was readily available.

My answer ultimately was found in the small corner of my Gmail interface online, and it has made things so much easier. With Google tasks, I always have my most important tasks waiting for me, regardless of what computer I'm logged in to. It's also right there in my email... A place I have to check quite frequently!

To access Google Tasks from Gmail, simply press the 'Tasks' button under 'Contacts'. 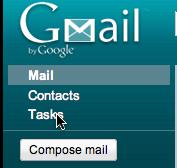 Once pressed, you'll be greeted by a very, very minimal tasks list that is always the same on any computer you ever go to. It's always just the way you left it, whether you're on a Mac, or on a PC, Linux, it doesn't matter. Also, if you left your tasks open within Gmail, they will also be open when you log-in again. A constant reminder that you cannot escape. 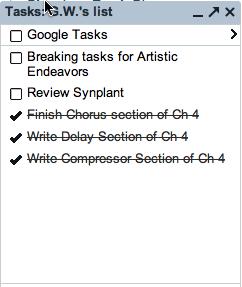 The actions menu within your Tasks pane is also filled with a slew of minimal, yet healthy features. There are even keyboard shortcuts for some of the more regular tasks, such as: Move up, move down, edit details, etc. Edit Details in particular allows you to assign dates to your task, and leave comments. You even have the ability to print from this menu. For example: You may be one of those guys that still prefers the cork bulletin board. Yeah, so much for the environment! 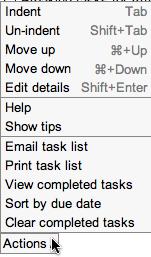 Also, just because you have one tiny pane in the lower left hand corner, do not think you can't have more than one list. The little Bullets button in the bottom right hand side of the pane accommodates this command and gives you a menu of other lists available, plus more options. 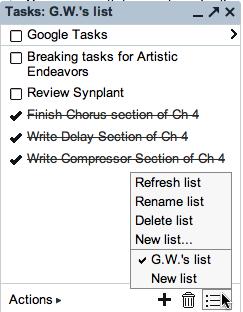 There are definitely more features that could be added, like the ability to assign a task to someone else. But for me, I'm actually excited about Google Tasks because it's simple. There's not a lot to muddy up the process. Type your tasks in, and check off what's been done.

And, I have to tell you, checking something off feels really good!