All Articles Motion
Motion: Large Animation Workflow Tips
Iain Anderson on Tue, December 3rd 0 comments
Language
Motion is one of the more CPU efficient video effects tools available. However, there will be times when you want to do more in real time with less stops and starts. Iain Anderson shows you how.

Motion is a fantastic tool for creating many kinds of animation, but especially for moving typography or infographics. As it uses your graphics card for the heavy lifting, you can often work without pausing, watching your animation in real-time rather than having to use RAM Preview all the time. [https://vimeo.com/69563518] Whatever you choose to make, though, it’s worth keeping a few points in mind to make your animation experience as smooth and fluid as possible.

Split up your piece into manageable chunks

Fairly easy, this one. Make sure you don’t just throw everything in a single group, but instead, collect related objects into separate groups by selecting them and pressing Command-Shift-G. Of course, you can also have groups within groups to organize things further. This is especially handy when you decide you need to break an existing object into several smaller parts for separate animation — you can still manipulate them as a whole by simply grouping them together.

Here, different scenes within an animation can be moved independently for easier retiming.

Vector artwork, created in Illustrator, is an excellent idea. Not only can you enlarge it to any size (if you deactivate the Fixed Resolution checkbox in the Media pane, discussed here, you can recolor it, zoom it in, or use it as a mask for other artwork.

The easiest workflow is this: create each separate item of artwork on a separate layer in Illustrator. Name each layer. Then, use this script that I modified to export each of your layers to a PDF named for the layer name. Finally, import all those files into Illustrator. You’re welcome.

If you ever change your source PDF files (and PDF is the format to use) then they’ll be instantly updated in your Motion project.

A source file in Illustrator with named layers, before exporting.

White objects can be easily tinted

Anything you make in Illustrator that you’d like to use in a flat color should be created in white, to make it easier to change color while in Motion. You can use the Colorize filter, or use a white object as a base for the Replicator. This way, you can change it while you edit (or even animate it) rather than having to return to Illustrator.

Replicate (with built-in Colorize chosen) or the Colorize filter.

One issue with Illustrator layer-based PDF importing is that the position of the objects is not retained in Motion. If it’s important that position is retained (and you don’t need to scale it much) then one easy fix is to export from Illustrator to a PSD, including layers.

Make sure Write Layers is ticked, and use as much resolution as you need — within reason.

When you’ve got your layered Photoshop artwork ready, you should save a new copy for Motion importing, and in that copy, you need to remove layer masks, adjustment layers, and layer effects. The easiest way to do that is to select groups of layers together, then press Command-E. (To quickly flatten a single layer, make a new blank layer, then Command-click on the name of the layer you want to flatten, then Command-E.)

This “locally flattened” file is absolutely not the same as flattening on export, but it still loses a lot of data from the file — so keep your original around in case of revisions.

Too many layers to name.

Use Behaviors where possible

The Library’s Behaviors > Basic Motion pane has a selection of important controls which make life a little easier, and the Simulations pane has many more. Because they allow you to change an object without applying keyframes to it, they’re very movable, easy to modify and reusable between objects. Sometimes keyframing is still king, but changing your style to use Behaviors whenever possible will reward you greatly.

The Framing behavior is simply awesome.

Use Parameter behaviors too

When you can’t find a regular behavior to do what you want, use a Parameter behavior instead. I’ve written about them here before, and won’t recap that all here, but they’re very powerful and a huge time saver. A great way to avoid keyframing, too.

Some of the built-in presets are very complex, and are a fantastic way to kick off an animation. The text animations and shape styles in particular are very usable and a great source of inspiration. Pick one, then tweak it. Speaking of shape styles, have you ever thought of keyframing the opacity of a gradient you’re using to draw a line? Me neither.

Just a few nice things you can do to text.

You probably know about I and O, to set the In and Out points of an object or group. Still, Shift-[ and Shift-] are vital, for moving the start or end point of a selected object to the playhead. Very handy indeed for lining up multiple objects, and confusingly shown as Shift-{ in the menus and the Command Editor.

Not sure why the shortcut isn’t shown as Shift-[

A simple one: if you’re using complex objects like particle effects with huge numbers of points, don’t change those points while the playhead is way down the timeline. Motion will have to recalculate every state of that object all the way along, so it’s much faster to move away from the object (or to its start) and then change it.

Beware! Too many points!

Easy, this one: keep related objects together by selecting them, then pressing Command-Shift-G to make a new Group. Even better, you can often move an object’s behaviors to its containing group, then add additional objects inside that group and affect them all.

You are naming your groups, aren’t you?

Use Link behaviors if you can't keep objects together

Sometimes you’ll need to keep objects separate but transform them together. For that, use the Link parameter behavior.

They’ll move or rotate together, wherever they are.

Use Cameras to change your view instead of moving objects

Treat your Motion workspace like a film set, and create new cameras when you want to cut to a new angle. You can even use a continuous base camera (a wide shot?) and zoom in by using other, closer cameras which sit above it.

And I haven’t even mentioned the Framing behavior here.

Keep backgrounds in 2D groups but the rest in 3D

If your background color is going to change in your animation, make a separate group at the bottom of the stacking order, and keep it in 2D to isolate it from 3D camera changes.

That icon in the green circle means 2D.

Duplicate and swap media a lot

For different variations of the same object, simply duplicate (Command-D), reposition in time, then drag new media directly on top of the object from the Finder. Guaranteed to be in the same position, scale, etc.

I should probably have renamed these layers.

Press K to clone a layer; this example shows part of a layer with refraction applied.

Work in standard or draft; output in Best

Some render settings can really slow you down — Motion Blur and Depth of Field spring to mind. While you may want to keep them off during editing, make sure you enable these settings on export for best results.

Motion is an awesome animation package, and while you can work with it just like you’d work with After Effects, you’ll do better with a slightly different approach. Like FCP X, it’s different, yet powerful, and worth taking the time to learn. Good luck! 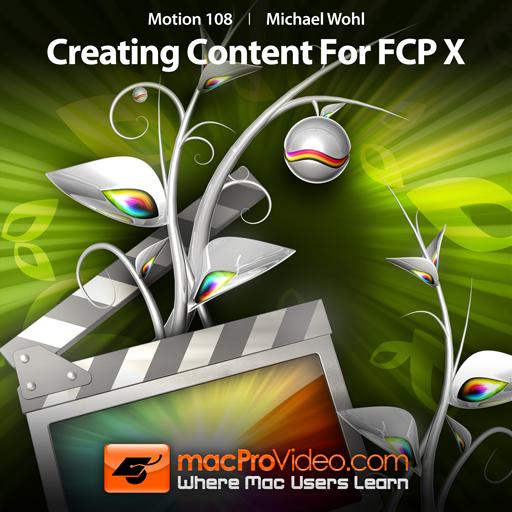 Dream It. Do It.
Do you want to learn Creating Content For Final Cut Pro X?
Yes, I want to learn!
No Thanks, I just want to read the article.
Feedback
How are we doing?
We'd love your thoughts, feedback and questions regarding our new site. All feedback is appreciated!
We do not respond to this form! If you need support, please visit our support page.
Thank you for your input!
Your message has been successfully sent
Course Advisor
Don't Know Where To Start?
Ask A Course Advisor