All Articles Music Theory & Education
Music Theory: Odd and Compound Time Signatures
Lynda Arnold on Sun, September 27th 2 comments
Language
Tired of the ol' 4/4 time signature? Looking to freshen things up with an exciting/unusual meter like 5/4 or 7/4 or 7/8... etc? Lynda Arnold delves into the "other" side of compound time signatures.

Every time you load up a new session, regardless of DAW, the time signature defaults to 4/4, the most common time signature used in music composition. For those who need a quick review, the top note of the time signature refers to the number of beats per measure and the bottom number describes what kind of note receives one beat, thus determining the time value of all the notes in the signature.

Most producers, especially of the EDM variety, are naturally guided to the ‘4 on the floor’ time signature, without giving other possibilities a second thought because it’s so widely used. And rightly so, the time signature of 4/4 is what moves and grooves most of the population as well as other common quarter note based ones like 2/4 and 3/4. The time signature 3/4 is an odd time signature, but the most recognizable in classical forms like waltzes with its feeling of swinging motion, rather than march-like 4/4 or 2/4 time. But, there are other exciting possibilities in the world of time signatures to explore. In this article I will demystify the most common Odd Meters like 5/4, 7/4, 5/8 & 7/8, and describe the wonderful world of compound meters.

Without a doubt, 5/4 and 7/4 are the most commonly used odd time signatures. The quarter note still receives one beat in both, but each has a unique feel. Both go against our natural tendency to think in strictly duple or triple, especially when it comes to which beats are emphasized in a melodic phrase or in the groove. In any time signature, the first beat receives the most emphasis followed by secondary or weaker emphasis beats.

One of the memorable music themes in 5/4 is the Mission Impossible theme. Many folks recognize Paul Desmond’s jazz classic "Take Five" on Dave Brubeck’s album Time Out as a masterful take on this time signature. In "Take Five", the melodic phrasing is consistently grouped in 3 + 2. In other pieces, it can be the other way around and that’s part of the flexible fun of 5/4.

7/4 is not as common as 5/4 throughout all genres but has some notable examples including "Solsbury Hill" by Peter Gabriel and the main riff in Pink Floyd’s "Money".

I recently collaborated with a frame drum artist and educator who uses the phrase ‘talking talking triangle’ to teach the rhythm of 7/4 on the frame drum. Often, spoken phrases or word patterns can help us visualize and hear the timing better. In this example, the beats are divided into two groups of 2 and 1 group of 3. There are more variations possible with 7/4 like:

You can also try:

The beat emphasis is on the ‘1’ in each group. Counting 7/4 in groups of 2, 3 or 4 also makes rehearsing easier than counting to 7 each time. Composers and drummers, more specifically, tend to experiment with the secondary beats depending what’s needed musically. In those cases, you would hear an emphasis on the ‘2’ or ‘3’ of the group rather than one.

5/8 and 7/8 work in a similar way to 5/4 and 7/4, the main difference being the shift in time values of the notes. In 5/8 time, the 8th note receives one beat, the quarter note 2 beats and so on. The same groupings explained above still apply. These time signatures are often mixed up with other compound meters. For example, a composer may center a composition around 6/8 or 9/8 but throw in an odd measure here or there to change things up or end a phrase differently. Radiohead has used many odd time and alternating signatures in their work. 7/8 is partly used in "Paranoid Android."

Compound Time or Compound Meter contain beats that divide into three equal parts. Compound meter is often called Triple meter with the most common being 3/8, 6/8, 9/8, 12/8. In orchestral music, conductors provide the pulse for each beat in slower compositions while in fast ones, only the first pulse of each beat group is emphasized. In other words, in a fast 3/8 piece, a conductor will show one beat per measure, 2 beats in 6/8, 3 beats in 9/8 and 4 beats in measure in 12/8. Theoretically, compound time could also be described as simple meter (4/4 or 3/4) with triplets, although this would disrupt conducting patterns when the tempo changes. Regardless, compound meters have a swing that simple meters just don’t have, containing a flexibility in feel and timing that is quite different from simple meters. In a DAW, composers and producers can set up a special metronome for compound meters that emphasize the first of each group of three with a stronger accent then the secondary beats while writing.

Famous pieces and styles in Compound Meter include Baroque dances, Irish jigs and other folk dances from many cultures often in 6/8. "Für Elise" by Beethoven is one of the most famous pieces in 3/8. Check out recordings of Debussy’s "Clair de Lune" and Bach’s "Jesu, Joy of Man's Desiring", both in 9/8 time. Also a great classic song from a Broadway Musical in 12/8 time is "Memory" from Cats.

The best way to understand how these rhythms work is to listen to famous compositions written in these time signatures. Clap and count along to get a feel for how melody, rhythm and harmony intertwine. If you are not comfortable leaping into odd time signature or compound meter composition quite yet, listen to a lot of classical and popular music using different rhythmic approaches. Your research will be an inspiration for your current and future work. Go explore!

Lynda Arnold
Lynda Arnold is a singer/songwriter, multi-instrumentalist (voice, flute, piano, and guitar), and electronic musician/sound artist who has been producing, performing, and developing her own sound for over 12 years as â€˜Divasonic;â€™ an ethereal, song driven electronic music project with multiple album and single releases on labels EMI, Clubstar (Germany), Sugo/RTFM (San Francisco), Epiphyte (San Francisco), Temple Music Group (San Francisco) and her own imprint, Digital Bliss. She has spent years collaborating with other artists and touring in support of her releases and founded Digital Bliss Productions in 2004 to promote the music of up-and-coming, as well as established female-fronted electronic bands and music producers around the globe. In addition, she is a seasoned music and audio production educator with a thriving private practice. Recent projects include a collaborative piano album called â€˜Hammer Inventions,â€™ developing a sound healing practice and composing meditation music for yoga classes, live events and websites.
Related Videos
Comments (2) 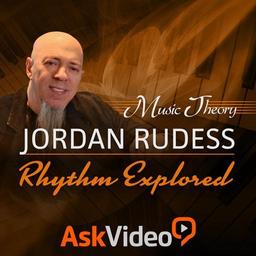 Dream It. Do It.
Do you want to learn Jordan Rudess: Rhythm Explored?
Yes, I want to learn!
No Thanks, I just want to read the article.
Feedback
How are we doing?
We'd love your thoughts, feedback and questions regarding our new site. All feedback is appreciated!
We do not respond to this form! If you need support, please visit our support page.
Thank you for your input!
Your message has been successfully sent
Course Advisor
Don't Know Where To Start?
Ask A Course Advisor