All Articles Photoshop
Creating and Working with Layer Comps in Photoshop
Elaine Ashburn on Fri, April 3rd 0 comments
Language
Elaine Ashburn spills the beans on how to effectively create and use layer comps in Adobe Photoshop. Perfect for novice users.

The two things I am most often asked at work are:

I'll answer both with a simple '˜yes'.

What are Layer Comps?

Let's see what they can do.

I was walking around the West Village on a lunch break right before Thanksgiving and I came upon an interesting sight. A greenish-yellow Mini Cooper was parked under a tree and I guess the temperature drop the night before caused the tree to drop all its leaves'¦ right onto the same-colored car beneath it. It was the perfect photo-op, so let's use this to demonstrate what Layer Comps can do.

First I borrowed a little from 'Google maps' and blurred the license plate, then I added a little brightness and contrast to the image but other than that, I didn't alter anything. This is exactly what I stumbled upon. (Image 1) 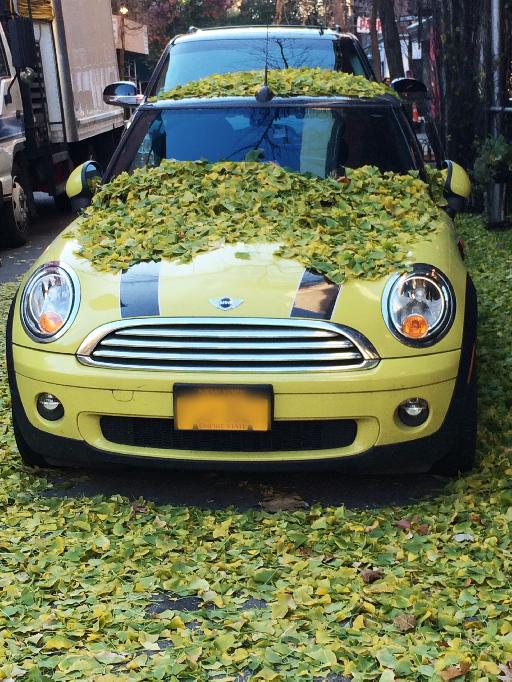 Let's play around with a couple of headline options for this image and use them to show what Layer Comps can do. I thought two fitting lines for a Mini Cooper might be, 'Let's leave' and 'One with nature', so I've used them.

Now let's pick a typeface and type in one of the headlines. I used Cooper Black as the font; after all, it's a Mini Cooper. So type in your headline and position it nicely on the image.

Once you're done, save your document, calling it whatever you want. 'I've called mine 'Leave'. (Image 2) 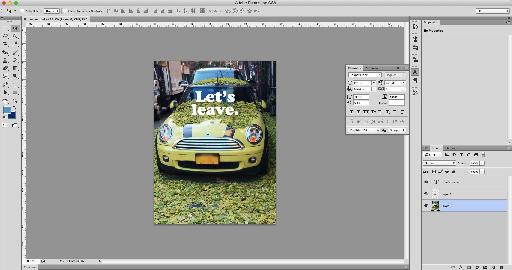 And now the fun begins. Go up to your top menu bar and under '˜Window' pull down to '˜Layer Comps'. (Image 3) You'll notice that where your '˜Character' palette was before (right of image) a Layer Comps palette has replaced it. (Image 4)

To the extreme right of the Layer Comp palette there is a down arrow next to a few parallel straight lines, click on this icon and scroll across to '˜New Layer Comp'. (Image 5). A new dialogue box appears, allowing you to name your Layer Comp. I'll call mine '˜Leave', put in a comment, something like, '˜Headline 1' and then say ok. (Image 6)

As you can see, the Layer Comp has now been named '˜Leave' and the annotation has been added. Save your file (make sure you do this often or you will lose information) and  go back into that far right icon to pull down and create a new Layer Comp. I'm going to call this one '˜Nature' and my comment will be '˜Headline 2'. (Image 7)

Now, let's duplicate the type layer by '˜option dragging' it above itself (or alternately going to the '˜Layer' menu up top and pulling down to '˜Duplicate Layer'.

Turn off your original type layer by clicking on the '˜eye' icon next to it to close it so that only the new type layer is active. (Image 8)

Now we're ready to go into our newly duplicated type layer and using the type tool on the left hand palette (the letter T), change the copy. My headline 2 was called '˜One with nature,' so let's type that in place of the line that is there now.

I didn't like seeing '˜One with' on the same line, as I wanted the word '˜One' to stand alone so I put '˜with' and '˜nature' together on the second line. But now the copy is wider than the width of the car, so for a pleasing arrangement, I want to make the whole headline smaller to fit within the car's footprint. To do so, go up to your menu on top to '˜Edit' > down to '˜Transform' > and then over to '˜Scale' and adjust the size of the type to fit within the car. Save the document.

Go back over to your '˜Layer Comp' dialogue box and next to the new Layer Comp (Nature), using the far right icon again, scroll down to '˜Update Layer Comp'. (Image 9) You now have two separate Layer Comps based on the same .psd file that you can toggle between. (Images 10 & 11)

Now let's say I want to differentiate them more, perhaps with orange leaves on one but don't want to destroy either of the two Layer Comps I already have. To do so, let's create a new Layer Comp. Again save the file before proceeding so you don't lose what you worked so hard to achieve.

This time around we actually don't need to start from scratch, we can duplicate the last Layer Comp we created, simply changing the information in either the name or the comments box to differentiate the two. To do so, once again go to the far right icon on your Layer Comps palette and pull down to '˜Duplicate Layer Comp'. (Image 12)

Let's change the name of this Layer Comp to '˜Orange leaves' or something that distinguishes one from the other.

Duplicate the background layer, first by double clicking on it and turning it into layer 0 (which is an unlocked layer) and then option dragging it on top of itself to form a new layer.

To change the color go to the top menu under '˜Image', pull down to '˜Adjust' and over to '˜Hue/Saturation'. (Image 13) Play around with the sliders to get some leaves the color you like. You'll notice that the car color and everything else also changes, but we can deal with that later. When you find something you like, say OK.

Now, to get rid of the colors we don't want, we can use the eraser tool (it looks like an old-school blackboard eraser) located on the tool palette to the left. Click on it, find a brush size that will easily fit in between the windshield and the leaves above it, adjust the opacity to 100% and start erasing anything you don't want. We now have orange leaves on our yellow Mini. (Image 14) 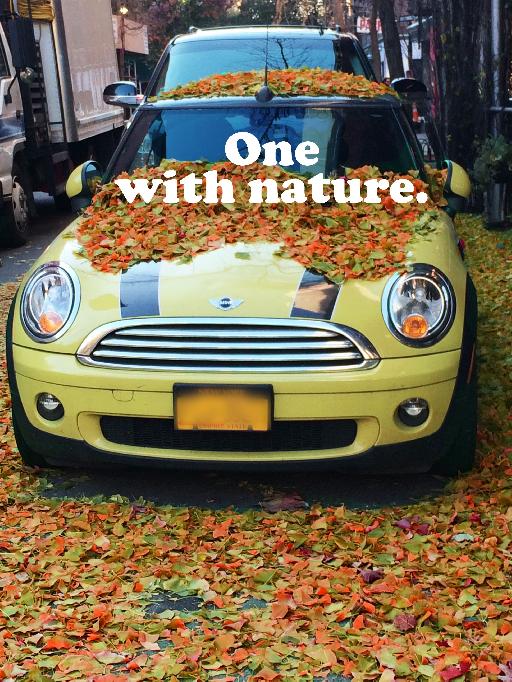 See how easy it was to make subtle changes to a .psd document while keeping the original intact? Now hopefully you'll learn to love Layer Comps too. :)