All Articles Photoshop
Creating animated Gifs in Photoshop
Elaine Ashburn on Sun, November 13th 0 comments
Language
So you want to know how to make animated GIFs? Adobe Photoshop makes it easier than you might think. Here's the A-Z for GIF enthusiasts everywhere.

Creating an animated GIF in Photoshop isn’t as hard as it sounds, or as hard as it used to be. Let’s take a look at how to do it using the Creative Cloud version of Photoshop. We’ll start by changing our workspace from the default ‘Essentials’ to one where we can animate. From the pull-down menu up top under ‘Window’, pull down to ‘Workspace’ and then over and down to ‘Motion’. (Image 1) 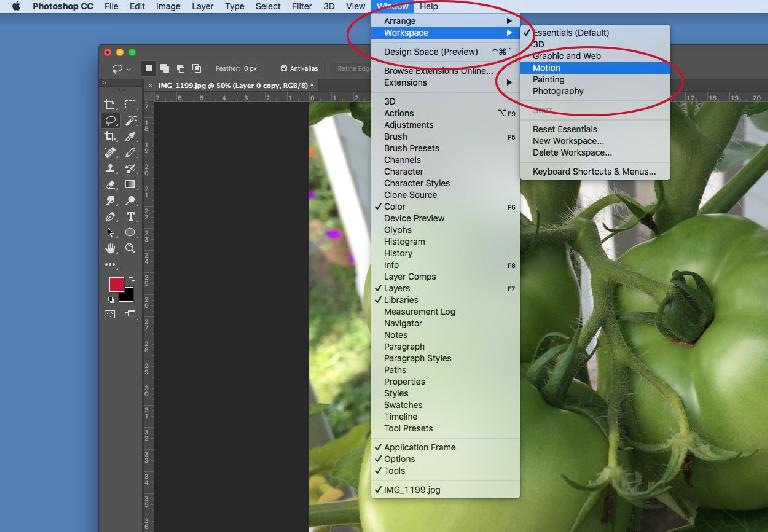 As you can see, this adds an animation timeline to your Photoshop window. (Image 2). You’ll also notice that there is a pull-down menu here, pull down from ‘Create Video Timeline’ to ‘Create Frame Animation’. (Image 2B) 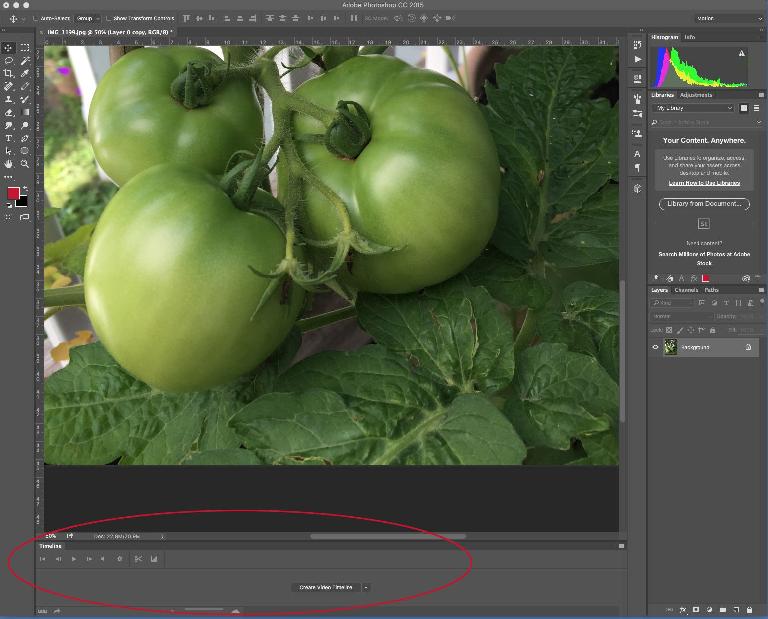 So, since it’s spring and pretty soon it will be tomato season, let’s quickly ripen a tomato with an animated GIF.

I found an image of one of my tomato plants from last year right after it stated to produce green tomatoes. I double-clicked on my background layer to unlock it and allow me to duplicate it. (Image 3) 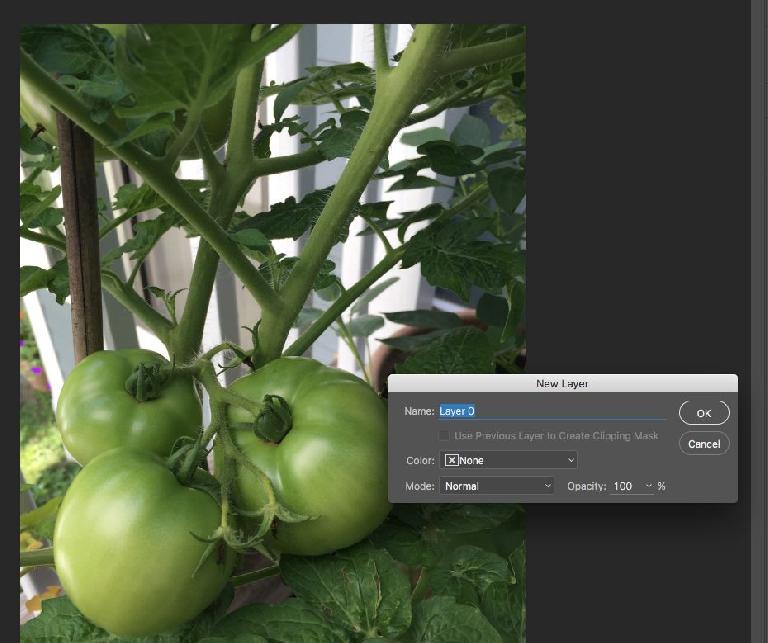 After I duplicated my base layer I used the Hue/Saturation adjustment pull-down under ‘Image’ > ‘Adjustments’ and I changed the color of my tomato plant, giving it a bit of a pinker color. I then duplicated that layer and again made it a darker pink. 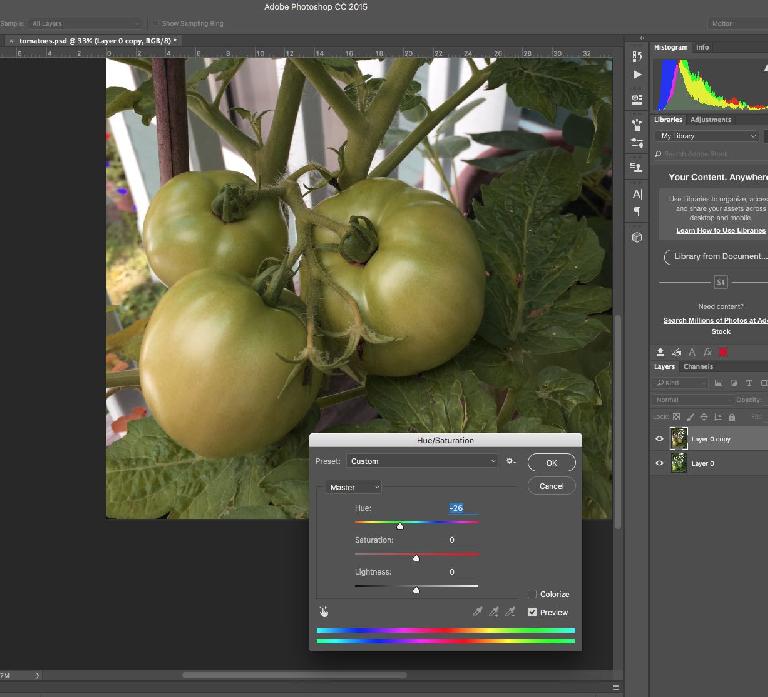 Once I got it as ‘red’ as the ‘Hue’ would allow—I upped the ‘Saturation’ to make it good and tomato-red. (Image 5) 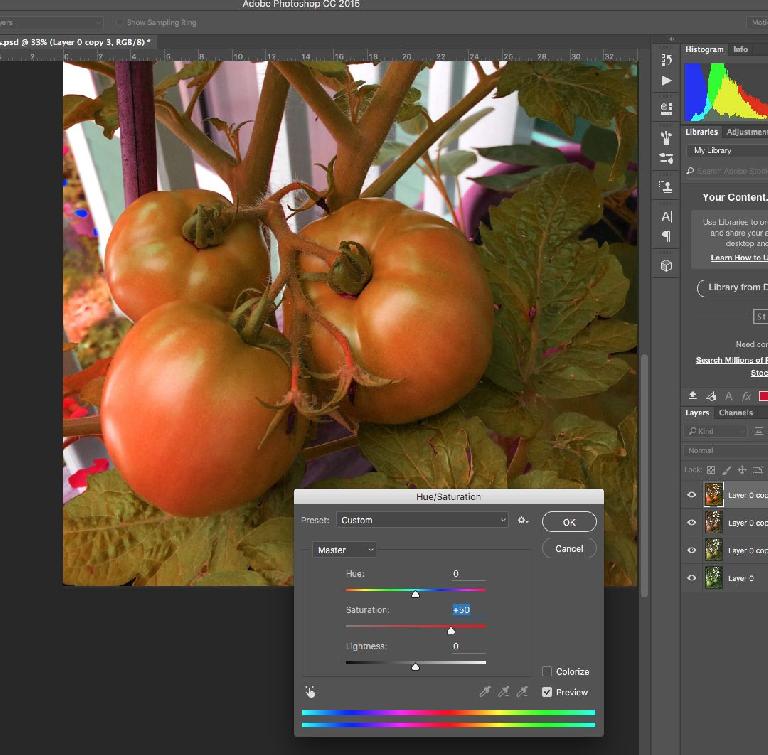 Then, using my pen too, I isolated one tomato and cleaned it up so that only the ‘fruit’ was highlighted. I then inversed my selection and deleted the background. I did this to all 3 additional layers, so now I only have one background on my base layer and 3 ‘tomatoes’ in different stages of ripeness.

And now that I’ve made all my layers, it’s time to get animating.

Click the ‘Create Frame Animation’ button once and Photoshop creates one frame from your visible layer. (Image 6) 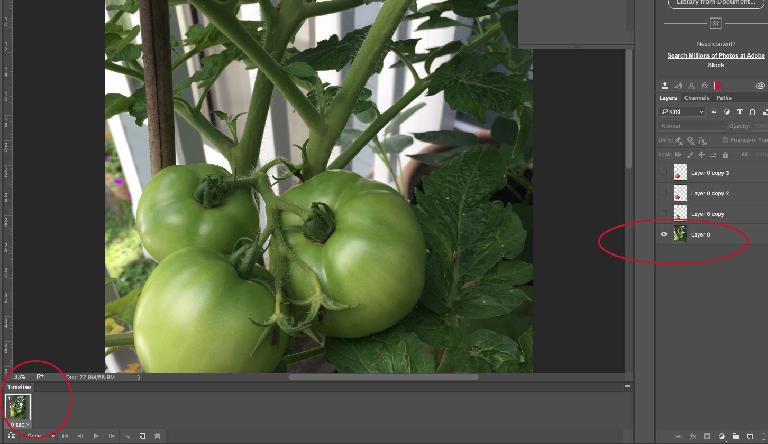 To add a new frame, duplicate your existing frame using the icon that looks like a page turning tool. You’ll see it makes a duplicate of the previous frame. (Image 7) 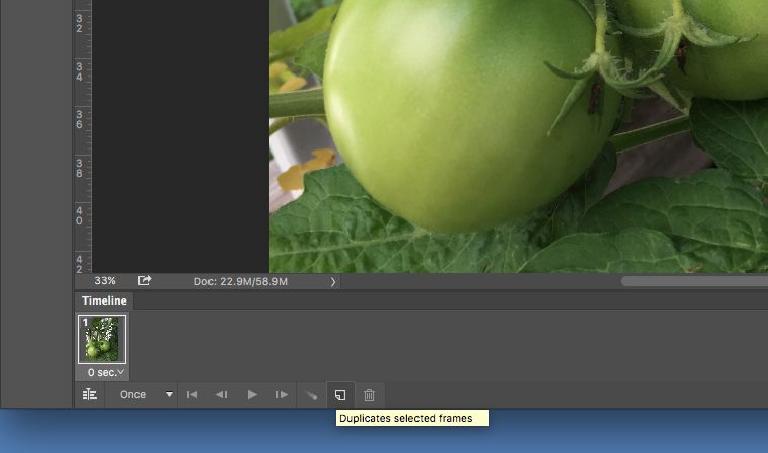 Your frame content is determined by layer visibility, so to animate to the next step you need to add the ‘slightly ripened’ next layer to the existing active one. (Image 8) 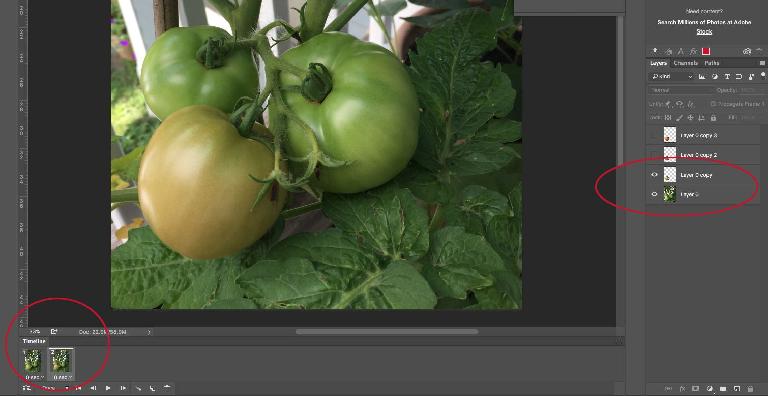 Duplicate the frame again and activate another layer to ‘ripen the tomato’ more. (Image 9) Let’s do that one last time to activate the final frame. 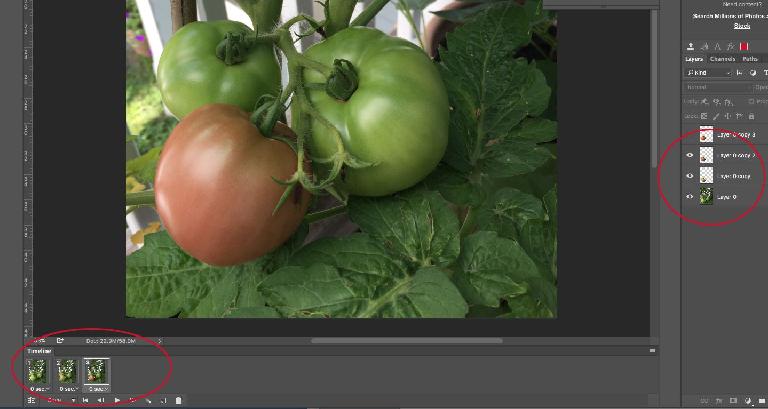 At this point your animation will work if you hit your play button, but it will be so fast you won’t see each step. To fix this, let’s start by adding 3 seconds to each frame so you can see how this works. Click on the down arrow on the first frame in your timeline and it will allow you to change the length of time that this frame is active before moving on to the next sequential frame. (Image 10) Hit your play button and you’ll notice that this is way too slow of a transition and that it is also jerky.

To remedy this, we need to speed up the time and ‘Tween’ in between frames. What ‘Tweening’ does is that it interpolates the difference between the active frame and the next one, so that your steps between frames are much smoother. Let’s speed up the animation to one-half a second and add 5 frames of Tweening between the first and  2nd frame. (Image 11)

Now hit the play button and you’ll see how smooth the transition is. It’s still a little too slow for me, but if you hold down your shift key and click on the first frame and it’s 5 instances of tweening, you can change their rate of speed at the same time. Let’s cut that in half to 0.2 sec.

Since that seems to be working nicely, let’s tween between our other two frames, keeping the same 5 instances of tweening between frames and at 0.2 seconds each.

Now that we have our animation right where we like it, it’s time to turn it into an animated GIF. To do this, go to File > Export > Save for Web in CC (or File > Save for Web in earlier additions of Photoshop). You’ll see in the dialogue box that comes up that you have some options. You can loop your animation a number of times or you can have it run continuously. You can also change your colors to something other than 256 if you want to save on k size. (Image 13)

My file wasn’t that big, so I kept my animation to 256 colors but I decided to let it loop 3 times. To do so I used the pull-down menu, went to ‘other’ and entered 3 into the ‘Looping Options’ dialogue box that appeared. I clicked OK and after a few seconds I had my animated GIF. To view it, you can drop it over any browser window, or in this case, just watch the image below.

You can actually do quite a bit with an animated GIF. You can add type and have that fade up; you can create movement by having your object first on one side and then on the other and tweening between them. Or, one of my favorites, you can have something leave the page and then reappear by physically moving your object off the documents edge and bringing it back in from the other side. Let’s take a look at that briefly. On the second animated GIF here, I’ve used a snowman that I previously made in Illustrator. Watch his hat get blown off and then come back on again. 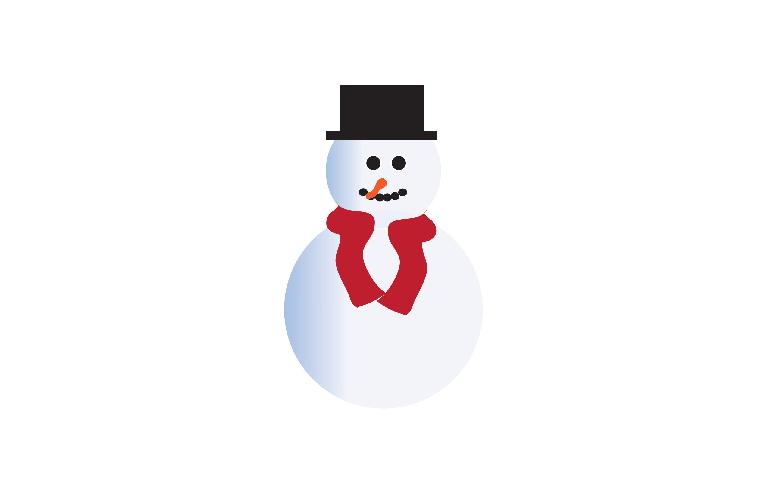 Dream It. Do It.
Do you want to learn Designing Album Covers?
Yes, I want to learn!
No Thanks, I just want to read the article.
Feedback
How are we doing?
We'd love your thoughts, feedback and questions regarding our new site. All feedback is appreciated!
We do not respond to this form! If you need support, please visit our support page.
Thank you for your input!
Your message has been successfully sent
Course Advisor
Don't Know Where To Start?
Ask A Course Advisor