All Articles Photoshop
Creating Simple 3D Type in Photoshop
Elaine Ashburn on Tue, December 9th 0 comments
Language
There are many ways to add a 3D effect to type using Photoshop. Elaine Ashburn shows you how to get started with the simpliest.

First we'll bring in an image for the background. I picked one from a recent photoseries that I call City Bikes. I'll use that as the headline too. So let's type in the headline and place it on the page so it looks good. I used Cooper Black as my font and since my original art is quite large I made my type 329 pt. (Image 1) 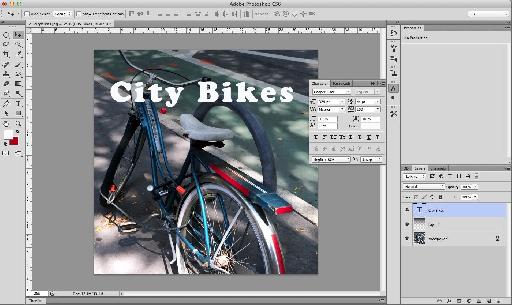 Let's put a 15 pt rule on the type. You can do this by going up to the Layer pull-down menu: Layer > Layer Style > Stroke and enter your stroke amount. I picked a color from my image for the stroke color using the picker (Image 2) and then say ok. To make this feel like it's 3 dimensional, let's add a bevel and emboss to it by going to Layer > Layer Style > Bevel & Emboss. (Image 3) Add some depth, up the size and soften the effect to get it the way you like it. I also played around with the Gloss Contour so my shadow was only on the left-hand side. (Image 4)

It's starting to look 3D but we need to add a drop shadow to it. You can do this by going back up to Layer > Layer Style > Drop Shadow.  (Image 5) Again, play with the sliders to get something that you like. (Image 6) I went back into Bevel & Emboss and changed my shadow on the type to blue for a more realistic effect. (Image 7) I'm going to leave it at this and then show you how to do an even more authentic 3D approach using the 3D built-in that CS6 has.

I have to say, I played with this a long time ago and the results weren't as good as they are now. In fact, I'd all but given up and resorted back to the multi-step, by hand approach. Glad I didn't.

Let's remove all our effects and start over, just keeping the type and the stroke on it.

You can do this easily by going to your layers palette, double-clicking on the effect and turning it off. (Images 8 & 9)

Let's turn this layer into a shape so it will no longer be editable as text. To do this go to Type on your pull-down menu up top > Convert to Shape. This makes your type a smart object. (Image 10) Now let's play around with some 3D. The 3D within Photoshop creates wireframes that can be manipulated to show all angles of the type, including the reverse side. There are a number of rotators up top that do this, but first let's convert it to a wireframe. To do this, first click on your layer to activate it then go up to your top menu bar and under the '˜3D' pull-down select '˜New 3D Extrusion From Selected Layer'. (Image 11) You immediately see a 3D effect. (Image 12)

Now click on the first layer under '˜current view' in your 3D palette. City Bikes (or whatever your type layer is named) Front Infation Material. (Image 13) You'll notice that a ball appears top right with a pull-down menu attached. These are the different presets we can use for our foreground layer. I clicked on the first one '˜fabric cotton' and you can see it replaced the foreground with a texture. (Image 14). Now let's play around with the 3D itself. There are buttons up top, let's click on the first one, which rotates the 3D object. Just by moving the wireframe on the screen you can adjust the angle and depth of the type. I rotated mine up and to the side. (Image 15 & 16)

The depth is a little hard to read against the background here, so let's make it another texture. Click on the layer called  '˜City Bike Extrusion Material' and using the ball in the upper right, pick another material. I chose wood balsa. Let's render it to see what we have going on. Go back up top and under 3D scroll down to Render. It will take a few minutes to render this out.

Now lets add a little light to it. At the bottom of the 3D palette you'll see something called '˜Infinite light 1'. Click on it and a ball with a handle will appear on your screen. (Image 17) Using the handle, rotate the light to your liking. 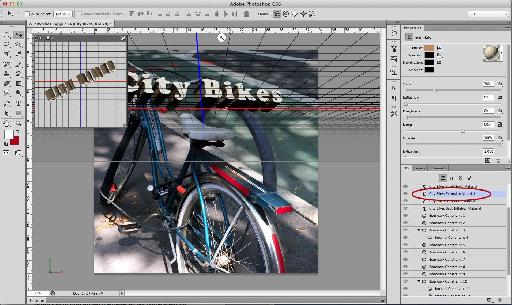 I wasn't particularly loving the angle so I went back to my top icons and used the first one to change the angle again. (Image 18). Then I changed the depth of the extrusion using the sliders up top. (Image 19)

A quick way to see how this looks is to save for web. Which I did here. (Image 20) I compared it back to Image 7 and the one thing I liked better in Image 7 was the bevel & embossing on the type. You can still edit any aspect of your 3D type, so I went back to my layers palette and added a little bevel & emboss and also changed my infinite light once again so the shadow would appear on the bottom instead of on the top. (Image 21) I could keep going until I got exactly what I wanted, but as you can see the possibilities are infinite. You can even import your own textures.

So let's take a look at them side by side now to see which we like better. Obviously the 3D version that Photoshop created on its own has more depth and more realistic shading, but there is something about the first one I created just using bevel & emboss, highlights and drop shadows that also has a lot of appeal. Just play around. In the end only you can decide which effect you like the best.