All Articles Photoshop
Enhancing Images Using The Layers Palette In Photoshop
Elaine Ashburn on Sun, July 9th 0 comments
Photoshop's Layer modes can be very useful for photographers looking to enhance their images. Here's a breakdown of some of the best tools to use on your photos.

Ah, the Layers palette. One of those scary built-ins in the lower right hand corner of your Photoshop screen. It is usually there by default, but if it’s not active on your computer simply go to Windows, scroll down to Layers and activate it. You’ll know it’s active when you see the checkmark appear next to it. 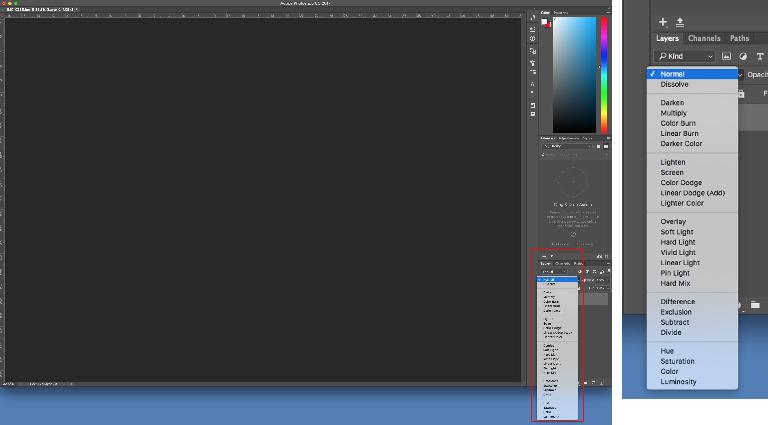 Here’s a close up of it open. You can see that there is a whole slew of things you can do with it. We are just going to talk about a few of the essential Blend Modes (that’s what Adobe calls them) today: Multiply, Overlay, Soft Light, Screen, Lighten and Pin Light. I use these often to enhance my images and it’s surprising what a big difference the use of them alone, or in combination can make.

Let’s bring in an image and start playing. I took this shot of an old, abandoned Mobile gas pump—and since it’s a little dark it’s the perfect photo to experiment with. First, double click on your Background image to unlock it. A dialogue box will come up asking you to name your layer. I usually keep it the default ‘Layer 0’ but you can name it whatever you want. As you can see, once you click OK, the lock disappears and it becomes an unlocked layer.

So, let’s take a look at what the different Blend Modes will do. Duplicate your Base Layer (option drag it on top of itself), so that you have 2 layers, one over the other. Now, on your Layers pull down menu, go to Multiply. You’ll see that although dark, the colors in the image have been enhanced. We can fix this by using the Opacity slider right next to the pull down you’ve been using. Bring it to around 50% and you’ll see that the image has increased drama. The area around the pump is still dark but this is the effect that Multiply has on an image. For comparison, the original photo is to the far right.

This time we’ll try Overlay, one of the more photographically useful blend modes. You can use the layer you previously made, or create a new one by dragging the original Layer 0 on top of itself. This time instead of Multiply, pull down further to Overlay. You’ll notice that it does darken this image, since it’s already dark, but it also enhances the greens and yellows. You can play around with the opacity slider to see if that will give you the effect you’re looking for… or you can overlay another image right on top. I shoot reflected sunlight specifically for this purpose. See how when the image is Overlayed with a streak of sunlight it brightens up the dark areas while keeping the drama that you want. I also use the eraser tool or the smudge tool to diffuse any sharp lines that appear (which I didn’t do here since I said we’d do this ONLY with the Layers palette)

This is my absolute favorite blend mode and I use it more than any other. It really gives a nice effect — even at 100% opacity. I’m going to use another image this time, one that’s a little bit on the light side and also slightly diffused, since it was shot through glass. So bring in your image, unlock it and duplicate it. Once again go to your blend modes and this time pull down to Soft Light. Notice how it just brightens everything up and gives your image a nice rich tone. And if you duplicate it one more time with Soft Light you’ll achieve an even brighter look.

I use the screen mode when an image is too dark and I want to lighten it. I usually use it in combination with one of my lighting tricks to bring visual interest to a photo. Here is one of my City Bicycles shots. On its own, it's dark. But once I duplicate it and use Screen mode, it is almost too light. So I brought in this antique lamp part that I found. I Overlayed it first and then used the Screen mode. As you can see it really brought the picture alive.

Adobe says that Lighten compares the two layers and uses the lightest pixel value so that no part of your image will get darker. I’ve never found that to be true if you use it alone. To me, there is never any visual difference. But if I use it in combination with a lighting trick I can get some really dramatic results. Here I’ve used a bicycle reflector in the Luminosity mode to diffuse its amber color and placed it on top of the original image. I then duplicated the base layer, brought it to the top and used the Lighten mode.

Pin Light is like looking through one of those pinhole cameras of old. I find it does really nice things to overexposed images. I’m going to use the same base layer as before — the doll (which you will barely see when I’m done). But this time I’m going to place an overexposed image over it. In the normal mode this is how it looks. But when I change the mode to Pin Light, this is what it does to it. Somehow it picks up intensity and feels like a hand-tinted image.

As you can see, these Blend Modes can turn an ordinary image into a much more dramatic one. So just play around, have fun and show off your new found skills.