All Articles Presonus Studio One
Create Easy Harmonies, Melodies, and Chord Progressions in Studio One
Gary Hiebner on Fri, October 17th 0 comments
Language
Whether you're a well-versed composer or new to the game, PreSonus Studio One has some tools to help making harmonies, melodies and chord progressions a cinch. Here's how.

Studio One has a great feature called Conform to Scale where once enabled, it conforms your MIDI notes to a specified scale. It can be useful for the beginner computer musician who is still learning what notes fall within a key and scale, and it's also helpful for more advanced users as well to help them create harmonies for their chord progressions or even melodies. Plus it can speed up the composing workflow of both beginners and advanced users. By conforming your MIDI notes to a scale, you give yourself more control over how your MIDI is going to work in the key of your song. Let's take a look at how to use this feature in Studio One.

First let's see how to activate this feature. Record in a MIDI part on an Instrument track. Then double-click the Instrument track to open up the MIDI Editor window. Now on the right you'll see a box that you can tick, next to Scale. Select a scale or mode that you are using in your song. Let's say you've recorded a MIDI part in the key of D major into your Instrument track. The D major scale contains 2 sharps (C# and F#). When you've enabled this feature, you'll see blue lines on the piano roll. They'll be showing you which notes are contained in the scale'"here you'll see D, E, F#, G, A, B, C#. This feature is also handy if you need to brush up on, and improve on your music theory. You can use this to see which notes reside in the scale, and if you switch between the different scales, you can see how the notes differ between the scales. 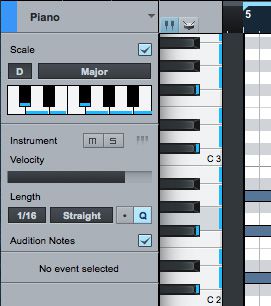 What's important to notice is that if you select your MIDI notes and move them either up or down, you'll see how they conform to the notes within the scale. So let's say you have a simple chord progression of D G D A, you can easily harmonize chords with this feature. 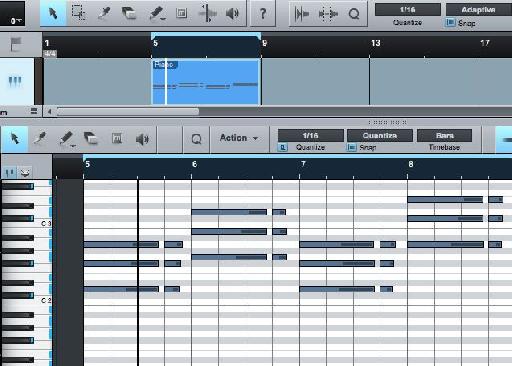 First create a duplicate of the instrument track you want to harmonize. To do this, select your instrument track, right-click on it and select Duplicate Track with Events. This track will have the same instrument on it, but you can switch this to a different instrument if you want another type of sound. 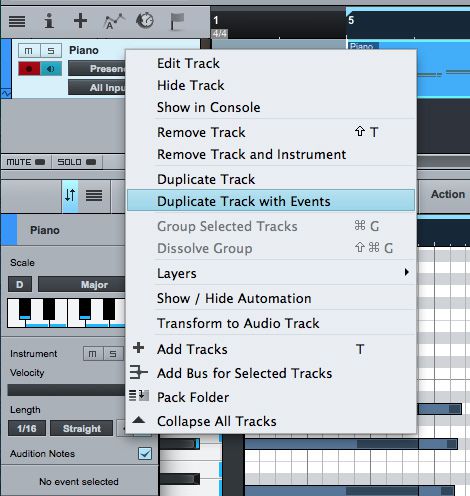 Double-click the event to open it up in the MIDI Editor. Make sure you have Scale ticked, and have chosen the scale and key you want to use. Let's stick with the D Major scale. Now select all your MIDI notes in the MIDI event, and then drag the notes up a 3rd so the bottom note of the first chord is F#. Play back and hear how the chord progression is harmonized by the new instrument. That sounds good; it's added the Maj7th to the D and G chords, and the A has become an A7. You can also easily make tweaks. I'd rather try a different chord for the A on the second track. Grab the G notes in the chord and drag them up to the next note they snap to in the key, and this will be A, making this now an inversion of A. 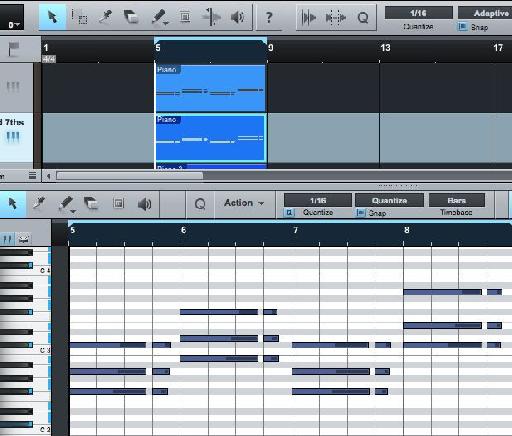 This technique is a great way to double up and layer your chord progressions. Plus you can see what notes fall within the scale that you can use to build up chords. Now let's see how it works with harmonizing melodies.

The Conform to Scale feature really comes into its own when you use it to harmonize your melodies. To see it in action, record in a melody over your chord progression. Duplicate this instrument track and its events. Now go into the MIDI editor for this duplicate event and enable the Conform to Scale and chose the key. Let's try some different harmonies for the melody. Select all the notes in the event, and then drag them down a 6th below. My melody starts on F#, so I have selected all the notes and then dragged them down to A, giving me a lower harmonized melody to the main melody. You'll see how the rest of the notes are moved up, plus how they are shuffled on to the correct keys in the scale. Now play back and hear how the new harmonized melody sound. If some notes don't sound quite right within your melody, you can select them and drag them around to hear where they sit better. The beauty is that when you drag the notes around they'll conform to the scale, so there won't be any notes that fall out of the scale range.

What also works quite well when harmonizing a melody is to choose to mute some of the notes, so that part of the melody is accented with a harmony. This technique is a great way to add in dynamics. 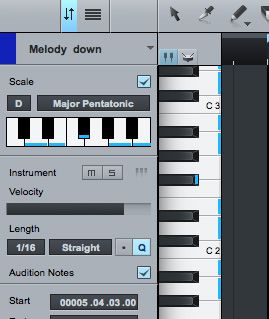 See how useful it is to use the Conform to Scale to create harmonies of your chord progressions and melodies. If you're a beginner, this is a great way to make sure your shifted MIDI notes fall on notes within the scale. For advanced users, this helps speed up your workflow when building up harmonized instruments in your song arrangements. Try this feature out in your next music production, it's really a quick way to build up interesting melodies within your songs.

For more Studio One tips and tricks check out the following tutorials:

Dream It. Do It.
Do you want to learn Advanced MIDI Toolbox?
Yes, I want to learn!
No Thanks, I just want to read the article.
Feedback
How are we doing?
We'd love your thoughts, feedback and questions regarding our new site. All feedback is appreciated!
We do not respond to this form! If you need support, please visit our support page.
Thank you for your input!
Your message has been successfully sent
Course Advisor
Don't Know Where To Start?
Ask A Course Advisor