Ok, maybe you're a little like me, and are slightly cloud-phobic. Not for everything (my entire computer backs up onto the cloud) but for certain things like automatic CS upgrades, I balk.

Trying to get around it I checked out some alternatives to my favorite CS6 programs. There are a few out there, especially for Photoshop so I did a little experimenting. First let's look at Pixelmator.

Let's give it a go! Starting from scratch, I liked the interface. It's colorful and the icons are close representations of the icons we know and love in Photoshop. (Image 1) 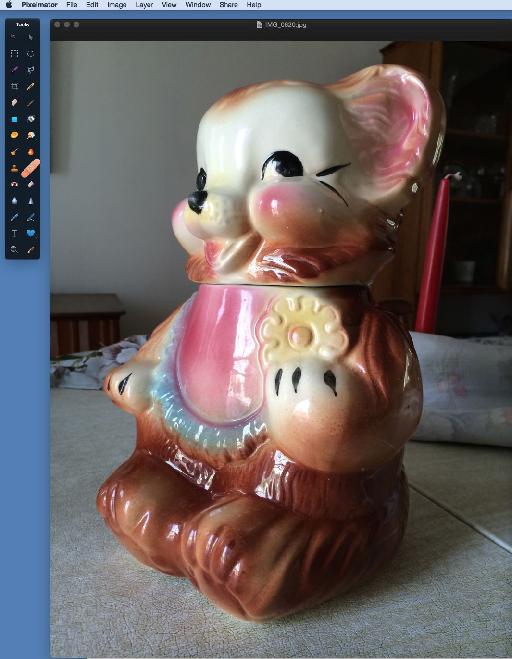 I opened a shot of my mom's cookie jar to clean it up, silhouette it and put it into another environment for the sake of this demonstration. The healing brush tool quickly and easily cleaned up the imperfections in the china and some unwanted highlights the built-in flash of my iPhone created.

What I don't like off the bat, Pixelmator would not let me do a '˜save as', so I had to save over my original, which was not what I had in mind to show before and afters. Fortunately I have another shot taken at the same time that I can use as a '˜before'. (Image 2 & 3) This is a before and an after using the healing brush. 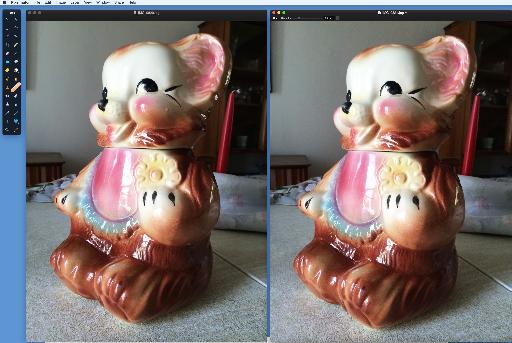 The image needed a little brightening and exposure enhancement so I played around with '˜color adjust'. (Image 4) I doubled-clicked on the '˜curves' icon and it brought up another window similar to the curves window in Photoshop so I lightened my image slightly (Image 5). I then double-clicked on the brightness icon and once again it gave me a separate window where I was able to up both the brightness and contrast. (Image 6)  So far, so good.

Ok now on to silhouetting this image.

In Photoshop I'd use my pen tool to draw a perfect marquis around the image. I did the same thing here. (Image 7) It created a '˜shape' for me, which I wasn't expecting, but worked with it. (Image 8) I highlighted the shape by double-clicking on it, went back to my background layer and copied it, then pasted it onto a new layer of it's own. I then turned off the background layer to take a look at it. (Image 9). It worked really nicely.

What I liked about the pen tool was that it worked kind of like a combination of the magnetic lasso tool and the pen tool in Photoshop. It followed the contour of the cookie jar for me, so I really didn't have to work too hard to silhouette my image.

So then I copied, pasted and put it into an environment. (Image 10) In order to make it look realistic, it's going to need a shadow. Let's see what Pixelmator can do.

It doesn't have an automatic shadow layer like photoshop but I duplicated the cookie jar layer and desaturated it to turn it into black and white. I also upped the brightness and contrast to get it as dark as possible (Image 11). That wasn't doing it for me, so I highlighted the layer and filled it with black. (Image 12).

I'm hoping to be able to bring this down to about a 30% opacity, blur the edges and then move it behind the original cookie jar image.

Using the sliders I was able to control the percentage of black and got it around 30%. I moved it behind the cookie jar image and adjusted the position. (Image 13)

I went back to my '˜effects browser' and changed the effect to '˜blur'. I picked a Gaussian blur and blurred my shadow. (Image 14) I then moved my shadow layer to the right a bit and blurred it some more. (Image 15)

The deck was looking a little ridiculous to me so I went upstairs and took a picture of my kitchen counter. The color was off so I used the brighten and contrast icons that I used earlier to brighten it up a bit. The shadow was now in the opposite direction so I just moved my shadow layer and duplicated it to follow the shadows that existed in my kitchen shot. (Image 16) 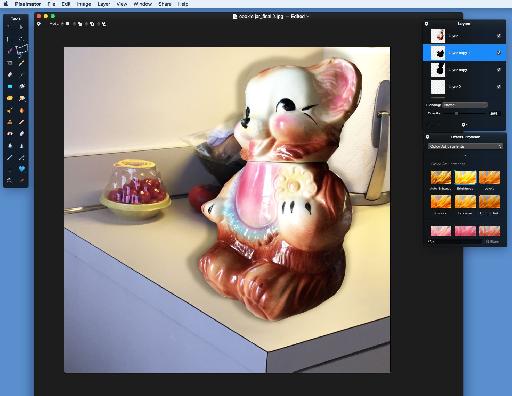 I like this program very much and in considering alternatives to moving to '˜the cloud' to upgrade your CS6 Photoshop, this is a very good option.

There are other free programs out there if you'd like to try other options but I'd give this one a go first. It does what it's supposed to do without a lot of drawbacks and you can't beat the 1-month free trial. On a scale of one to five, I'd give it a four and a half.

What do we think? Not bad for not Photoshop, right?

Dream It. Do It.
Do you want to learn 60 Tips Every Photoshop User Should Know ?
Yes, I want to learn!
No Thanks, I just want to read the article.
Course Advisor
Don't Know Where To Start?
Ask A Course Advisor