The Atoner and Noise Swash are great on their own, but even more fun together with the 4MS SMR, and an Intellijel Rainmaker:

Chaos, noise, mischief and mayhem. This is the realm of the Atoner and Noise Swash from 4MS. I like to think of them as serendipitous mystery sound boxes. If that sounds like it’s up your alley, you might want to add one or both to your rack.

The Noise Swash provides a strong possible answer to the question: What would a robot sound like if it sneezed, burped, hiccuped or farted? Expect a slurry of zips, burbles, and growls, just don’t expect to know exactly what to expect. The Noise Swash can work either as a sound or modulation source, or both. The surreal art style adorning its face plate serves as a representation of the bizarre sounds contained within. The look, approach, and sound of the module will no doubt be polarizing. Flying drill-headed penguin-like creatures probably aren’t everyone’s bag, but the blue PCB is unquestionably snazzy. The build quality is reassuringly solid, and the 10-turn swash knob is surprisingly satisfying to spin.

In use, the extended range of the Swash knob is great for finding sweet spots of personality and chaos, of which this module has plenty. The Noise Gait knob gives a more coarse control over the rhythm and density of the bursts generated. At one point on the website it’s referred to as a Noise Gate, which could be a clue or a red herring toward deciphering its behavior and functionality. My interpretation is that the Noise Gait (or gate?) controls the regularity with which the Swash outputs a burst of random signal. Further mangling is achieved with the Self Oscillation knob which opens and closes a feedback loop between the output and input jacks. Both the input and output jacks have switches to engage diode clipping, labeled Pre and Post respectively, allowing you to control the level of grunge in your signal. 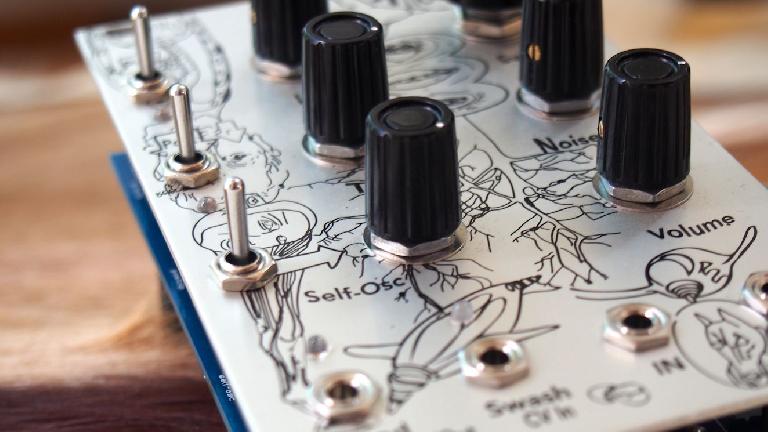 I assumed that the Low knob was an attenuator for low frequencies, but it actually “Decreases voltage supply to parts of the circuit, causing feedback to happen more eagerly”. The Tone knob, on the other hand, blends between a low pass and high pass filter after the Swash stage, so here you can [allowing you to] shape the tonality of your Swash.

Here are a few examples of the Noise Swash functioning as a standalone chaotic noise generator: 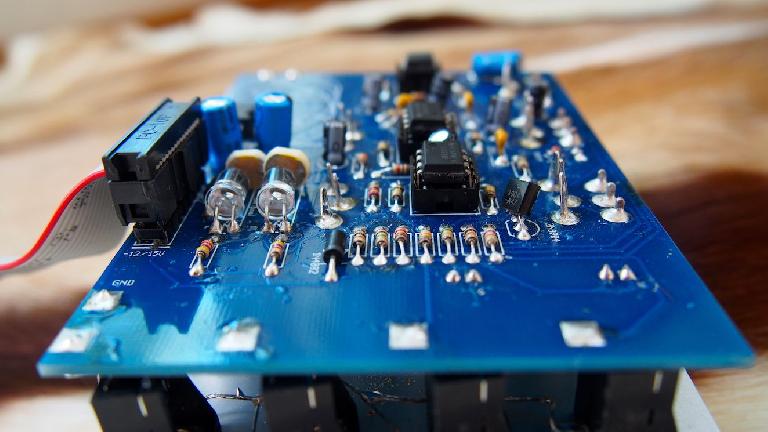 Interestingly enough, the Mood jack can be either an input or an output. As stated in the manual “Inputting a 0 - 15V signal modulates biasing near the swash and EQ stages. During intense oscillation phenomenon, this jack outputs random CV fluctuations.” Here are a few examples of the Mood CV output modulating the frequency of a simple sine wave oscillator: 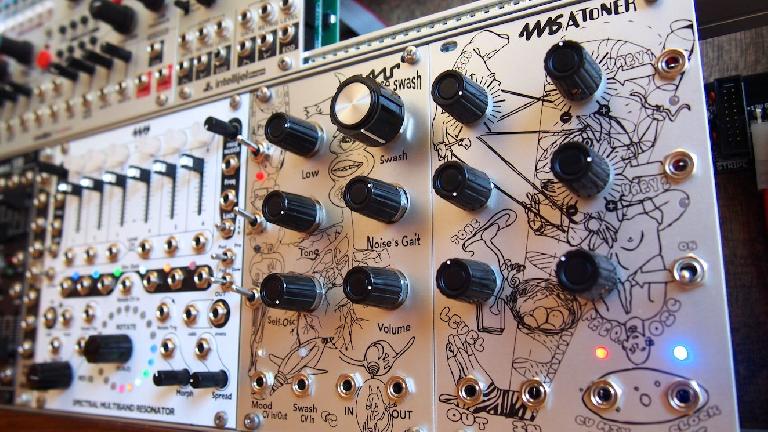 4MS currently only has the Noise Swash available as a kit, but there are a few retailers that still have stock of pre-assembled modules. The kit is billed as requiring intermediate level skill, so I wouldn’t recommend it as your first DIY project. 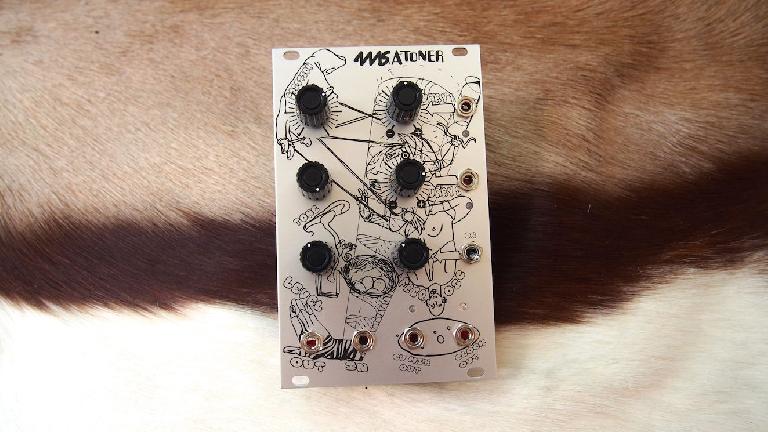 The 4MS Atoner shares the esoteric art style of the Noise Swash, only with puppeteer hands, a meditating monk, and a nest of eggs instead of the drill-headed penguins. Also like the Noise Swash, it can function as both a noise and modulation source.

The Position knob, or Puppeteer’s hand, sets the maximum frequency to be outputted. This means that “frequencies inputted above this cutoff will be shifted down in pitch in a harmonic series, from 20 kHz to 4 Hz or lower”. The range of this knob is divided between High Frequency Audio Range from 2 - 5 o’clock, Normal Audio Range from 11 - 2 o’clock, and Poly-Rhythmic Clock Range from 11 - 7 o’clock. Sweeping this knob allows you to zero in on sweet spots whether you’re searching for complex CV rhythms or chaotically modulated audio. 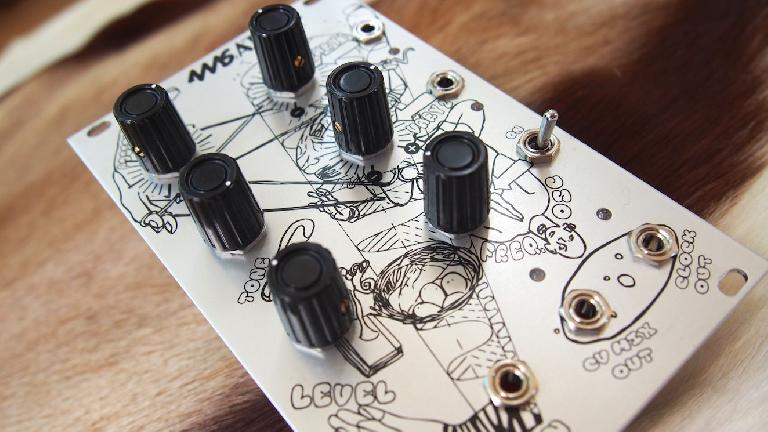 The Tone knob blends between low pass and non-resonant high pass, but it also seems to introduce some high frequency harmonics. Here’s a simple test of a tone sweep on the Atoner’s internal oscillator:

Vary 1 and 2 are CV inputs to provide modulation for the Position. Each has an attenuverting knob, and they combine with the Position setting to feed a CV output. This makes the Atoner useful as a CV mixer with offset, in addition to feeding complex modulation to Position. Here’s an example of the Atoner’s internal oscillator with position modulation:

One main function of the unit is to extract a Clock signal from an audio source. This can either be from the external input or the Atoner’s oscillator. A jumper on the bottom of the module sets the division factor extracted from this audio blend for the Clock. It can be equal, non linear, or divided by 2, 32, or 64. This is helpful depending on what you plan to sync or trigger from the Atoner. It would have been nice to have some kind of dial on the main panel of the unit to control this, but I’m glad it was included as a feature. I’d highly recommend trying the different jumper positions because they will yield very different results. Out of the box, it was set to divide by 32, but I enjoyed the results I got from dividing by 64 a little better.

It came as no surprise that 4MS gear works well with other 4MS gear. The Atoner and Noise Swash provide a perfect meal for their Spectral Multiband Resonator. I had quite a bit of fun using the Clock output to Ping a QPLFO which then modulated the cutoff of a Polaris filter. Here are a few examples of a simple PWM wave with filter modulation from that combo: 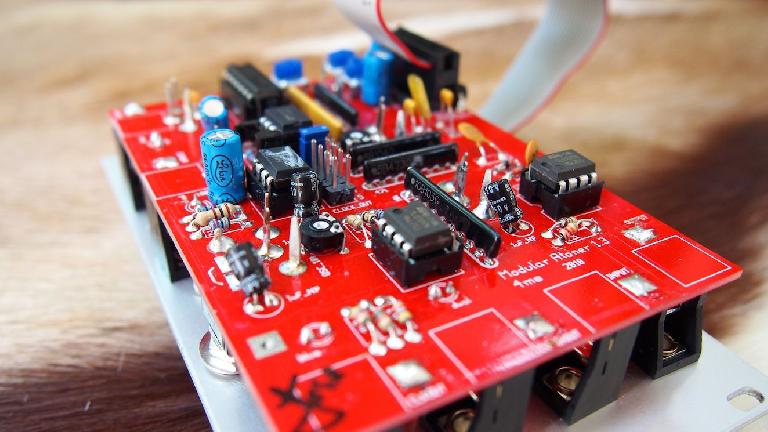 The Atoner is currently only available from 4MS as a kit with intermediate level difficulty. There’s probably a few still kicking around at various retailers if you want one that’s prebuilt.

Cons: No 1v/oct control of oscillator pitch, Division factor only accessible through jumper on back panel, Can create unpredictable mayhem and mischief