I usually try to avoid using the word "gnarly". For me, it will be forever wrapped up in California surf and skateboard culture, drawing memories of Pauly Shore, grunge music, and mushroom cuts. However it must be said: The Crush Delay from Befaco is definitely a gnarly sounding module. Delay is only half of the equation because the module is also a circuit bent digital mangler. As noisy and glitchy as this guy can get, the feedback path thankfully features automatic gain control to protect your ears and speakers.

Along with the satisfyingly big knob to control the delay’s speed, the crush has knobs for feedback, delay input, return level, and wet/dry balance. There are also three switches to engage the circuit bent behaviours and these parameters are all controllable via CV. Interestingly, the speed knob functions like a classic delay clockwise from the 1 O’clock point, while counterclockwise it enters the domain of digital distortion and bit reduction.

The Crush really rewards playing with the speed knob because you can get a wide range of effects and textures with a quick sweep. It’s also easy to quickly return from a chaotic mess by making a simple sweep of the wet/dry knob. The feedback responds quite well to CV modulation. I was able to get some great buzzy surges and wet slappy bounces by running various envelopes into the Feedback CV control. 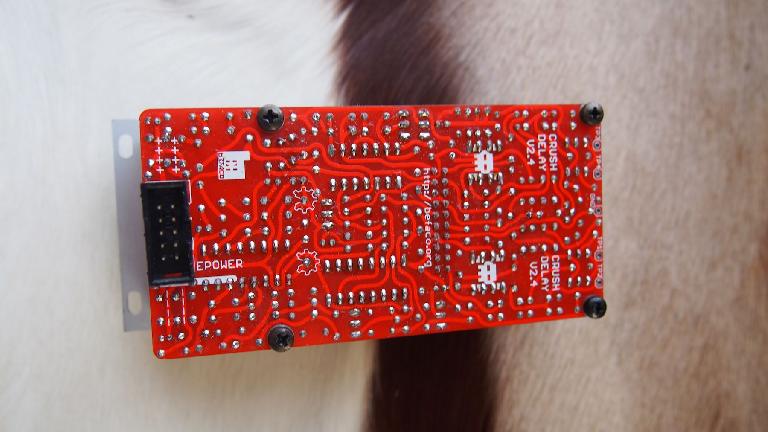 The Crush is able to create swells of feedback without an input source, and you can even send a 1v/Oct melody to the Speed control and use it as a strange wonky oscillator. 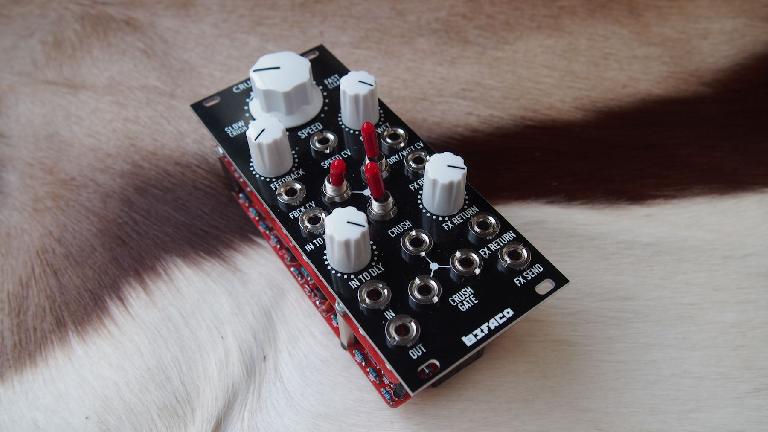 I found that adding another module to the send and return circuit could be pretty unruly depending on what you used. My Rings and SMR would cause feedback quite quickly as I brought up the Return level, but it was great for creating tonal washes of feedback. This made me very thankful for the automatic gain control in the feedback path.

The circuit bending switches are similarly unruly. I’ll admit I have no idea exactly what they do, but they’re based on the architecture of the PT2399 IC Chip used to create the delay circuit. The right switch seemed to be more subtle, while the left was more extreme. Sending gate triggers to their CV controls effectively created crunchy rhythmic digital noise.

The circuit bending effect is much more apparent in the "Slow Crush" range, and turning the Speed knob hard left really slams the signal into digital garbage. Used subtly, this distortion has some interesting and unpredictable personality. I often found it useful to attenuate my CV signals before using them to modulate the Speed, Feedback, and Return Level controls as a more limited range produced less wild results. In the first demo below you can hear an almost breathy quality created from a repeating synth bass pulse. 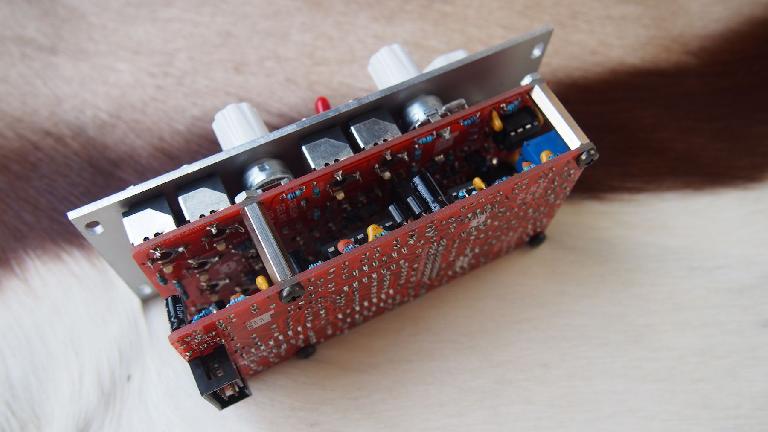 I found it quite interesting and engaging to have delay and bit mangling in one module. Being able to sweep from one to the other is definitely cool, and that Speed knob is a lot of fun to play with. You can get a range of sounds and textures that would normally require separate modules to achieve, but would not have the same ability to make the smooth transitions possible on the Crush. The unpredictable and noisy behaviour of the module can be easily diluted to taste with the wet/dry balance. If you’re looking to get a delay with a ton of character, controlled washes of searing feedback, and enjoy digital mayhem, the Befaco Crush will make a great addition to your system.