Recent years have seen Steinberg really developing the scope of its instrument lineup, and it was a big step when the company started to make its synths, samplers and drum machines available in Audio Unit and AAX as well as VST formats, meaning they could be used in pretty much any DAW. Its latest release is something unique - an 8-layer drum resynthesizer called Backbone. It comes with a 1.5GB library of sounds, but the idea is that you use these, and your own sounds, as a base for creating entirely new tones and textures.

This is a drum designer rather than a drum machine, so its look and feel are very synth-like. Actually it’s not just a drum designer - it’s equally adept at basses, rises and sweeps and all sorts of other cinematic sounds. With the kind of access to signal manipulation you get here, almost anything is possible. You’ll probably start by loading one of the presets from the built-in sound browser and as you’d expect these are tagged and grouped by category.

It will likely contain at least a couple of layers and eight are available in total, all able to be tweaked and processed completely independently through an identical set of stages. Layers can be muted and soloed, new ones can be added or existing ones removed. This layering is at the heart of what Backbone does, and the key to its sonic potential. 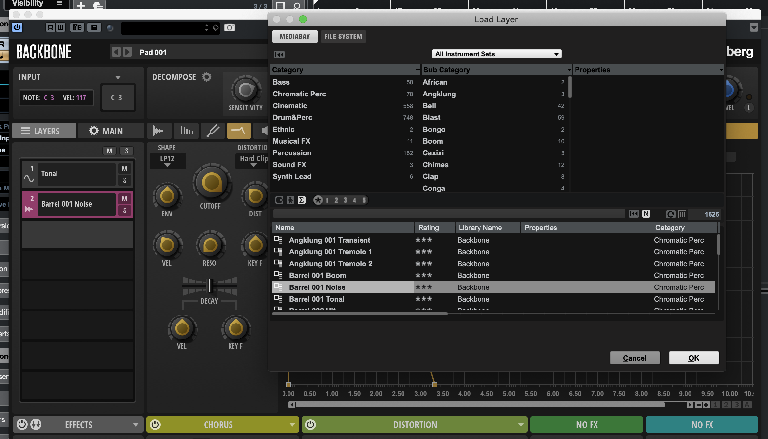 The workflow is really well thought out and Steinberg has avoided having too many different windows or menus despite the wealth of tools on offer. The main window provides quick access to the core editing stages and first up is Resynthesis. The instrument takes your sample and turns it into a resynthesized version, opening it up to the kinds of spectral modification that you would usually only get with a synth. This spectral version of a sound is almost infinitely malleable, able to be played much faster or slower than its original sample speed, and even set at zero to behave like an oscillator. You can position the playback at any point inside the wave, creating entirely new sounds. Remember this, like the other tools, is available individually for up to 8 layers.

Like the other stages here, double clicking on Resynth’s header opens a more detailed view with multiple parameters - here including impact, pitch, amp and envelope. Although powerful, you don’t particularly have to be a synthesis wizard to figure this section out and start to get some great results. As well as messing with formants and partials, there are interesting controls like Purity, which adjusts the level of difference between partials, and Accelerate, which gives you point-based control over the speed of playback. This can be anything you like - accelerate then stop, or slow down, and so on - and it makes it easy to create dynamic, moving sounds.

The other three sections, Pitch, Filter and Amp, are pretty straightforward, giving you the kind of control you would expect, and also with expanded edit sections for making envelope-based changes. All these sections have ways to precisely enter data as well as making broad brush changes with the mouse, so how you work is up to you. An onboard Effects section gives you two busses each with four slots and a great selection of processors to choose from. Keeping the effects processing in-house is particularly useful given Backbone’s ability to resample inside itself and also its support for dragging and dropping a sound directly into a DAW audio track with configurable tail and so on. You can also drag and drop samples and loops directly into Backbone, and export a WAV file of any layer or patch out to a file. It’s great to be able to do this so easily without any rendering or waiting. 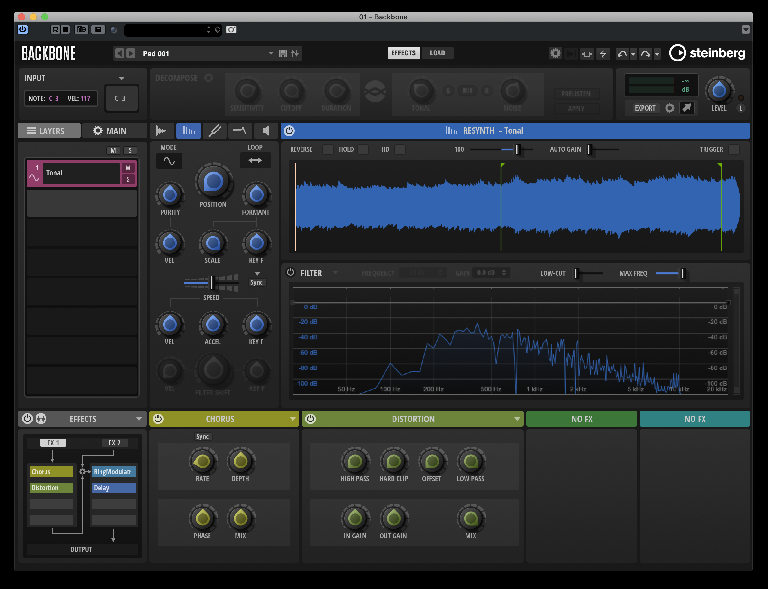 I’ve skipped past one of Backbone’s other novel features and that’s the Decompose section at the top, which is available for individual layers. This essentially lets you separate out the tonal and noise sections of any sample, mix and match or blend them. Most sounds, especially percussive ones, consist of an impact and a tonal element. The strike, and then the tone that sustains afterwards. These controls let you isolate and mix each one, so you could for example take the punch from one snare drum and layer it with the tone, or release, from a different one, or from a completely unrelated type of sound. It’s not even really limited to drums, you can do it with anything, using the layers to separate out the parts of each sound. If this sounds a bit science-heavy, in practice it’s actually very easy to use and gives you a flexibility that wouldn’t be realistically possible with conventional tools.

Backbone is a fascinating instrument. It’s a drum designer that can create sounds much more interesting than just percussion or electronic drums. I can see why Steinberg has gone with  “drum” for the name because it’s not strictly speaking a melodic instrument, even though all of its sounds can be played chromatically across a keyboard. And it doesn’t have a sequencer - you would create patterns by either recording MIDI into a track via the instrument, or by taking the hits and loops you export from Backbone and dropping them into groove Agent, HALion or some other sample-based beat machine.

The resynthesis stuff is fascinating and genuinely powerful. The Decompose section makes it possible to separate parts of a sound without doing any actual cutting or EQ, and could genuinely open up a lot of potential for micro-editing completely new textures. The 8 layers mean a ton of flexibility and the effects system means there’s little need to reach for external plug-ins to get rich, deep and dynamic results. The learning curve isn’t bad either, and even though there’s a lot going on under the hood, great work has been done in making the instrument as flexible, creative and intuitive to use as possible. You’d have to say that cinematic sound designers would absolutely love Backbone but then anyone working with electronic beats, sound design or looking to reinvent or go beyond their existing sample collections will find much to like here as well.

Pros: Genuinely interesting approach to sound design. Surprisingly easy to use for an instrument with so much power. Insane level of tweakbility when it comes to sound manipulation. Completely transform samples into new sounds. Layering system and FX mean plenty of scope. Nice touches like drag and drop of audio. Capable of much more than just drum sounds. Attractively priced considering its capabilities.

Cons: None as such - unless you were expecting a conventional drum machine. 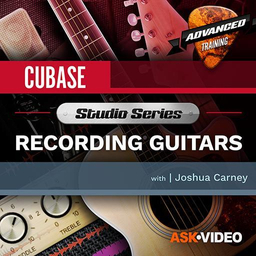 Dream It. Do It.
Do you want to learn Studio Series - Recording Guitars?
Yes, I want to learn!
No Thanks, I just want to read the article.
Feedback
How are we doing?
We'd love your thoughts, feedback and questions regarding our new site. All feedback is appreciated!
We do not respond to this form! If you need support, please visit our support page.
Thank you for your input!
Your message has been successfully sent
Course Advisor
Don't Know Where To Start?
Ask A Course Advisor