If you’re doing Hip-Hop, EDM, Trance, EBM, House, and any other sound that relies on electronic drums, you’re really going to want to check out the uBeat Bundle from Umlaut Audio. Despite the slightly questionable product name, it’s actually a very powerful drum library featuring three excellent Kontakt instruments that act as both interfaces, guides and players for a sound collection that is absolutely worth way more than what they are selling it for.

More Than Just Some Pretty Sounds...

Not only do you get a large supply of electro and hip-hop kits, but you also get MIDI files to go along with each kit, in turn. This makes uBEAT a package that would be great for beginner, and pro-level, alike... As long as the beginner has Kontakt 5. However, it is with the Hybrid kits, where the Electro and Hip-Hop sample selections are combined, where I really found my heart.

The libraries are represented and accessed through three different instruments, Hip-Hop, Electro, and Hybrid. Similar to EZDrummer, Superior Drummer, BFD III, and the like, you have access, within the interface to all of the MIDI files. And, thankfully, there are dedicated MIDI files for each kit, so that you can hear them the way the sound designer intended for them to be played.

Now, all of this sounds well and good, but there are thousands of devices, libraries and sample banks out there—What makes this one so special?

Well, for starters, each kit is not only polished, but the stages, the effects and chains (wait, did I say chains?) are already beautifully mixed. I’ll admit that I am usually a do-it-yourselfer with my drums. But, starting off a track with one of these kits really did succor my imagination. I found myself spinning a pretty bad ass beat with a nice little bass line, on my own, no MIDI files even used. The kits kind of speak to you, the way EZDrummer’s do. You feel like you’re sitting down on that well worn drummer stool, and picking up sticks, and you can still feel that creative magic in the air. I’ll commend Umlaut on this, as they accomplished a feeling of nostalgia without having to use considerable graphic design to pull it off with nostalgic interfaces. 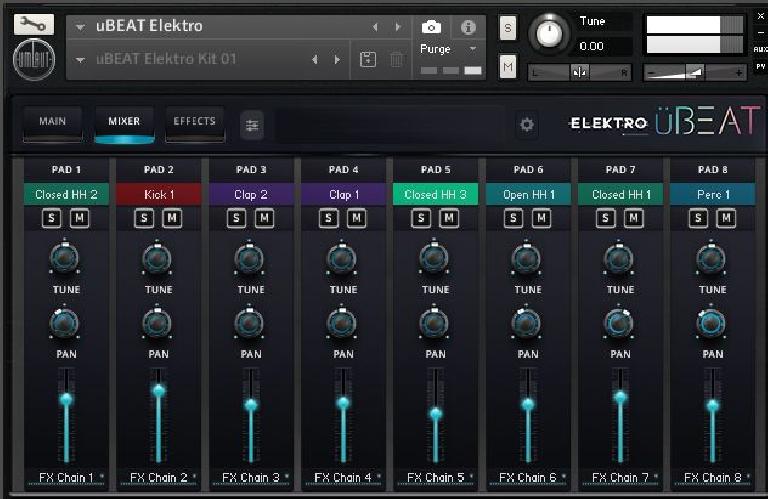 Eight pads within each of the uBEAT drum devices can be assigned to either one of eight effects chains, populated by some beautifully designed effects, or directly to the Global FX. Individual chain settings can be saved and recalled for later usage within different patches. And, the effects selection is nicely put together as a palette. Bus Compressor, Transient Master, Distortion, Tape Saturator are just some of the effects that you’ll find within the chain. And, they go far in adding some really nice, organic, warmth to sounds that are mostly synthetic, in origin. 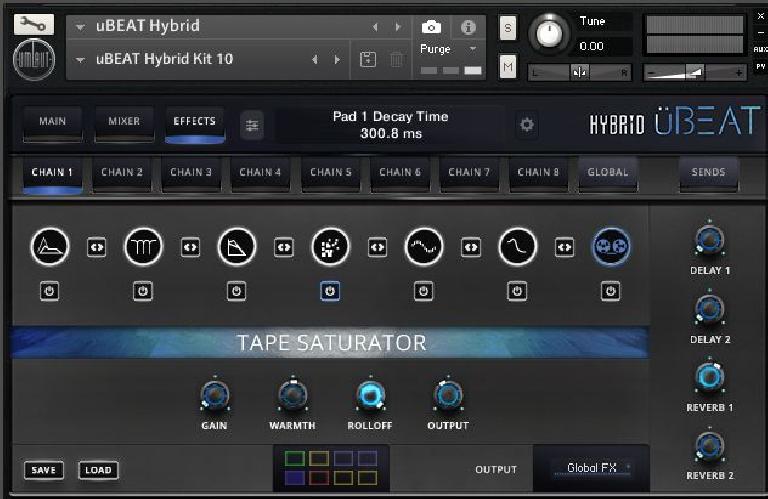 As an eternal student, I particularly liked that you can actually see and hear the settings in action, thanks to a beautifully designed interface, making it very easy to take tricks away from UBeat, and simply apply them with other plug-ins. 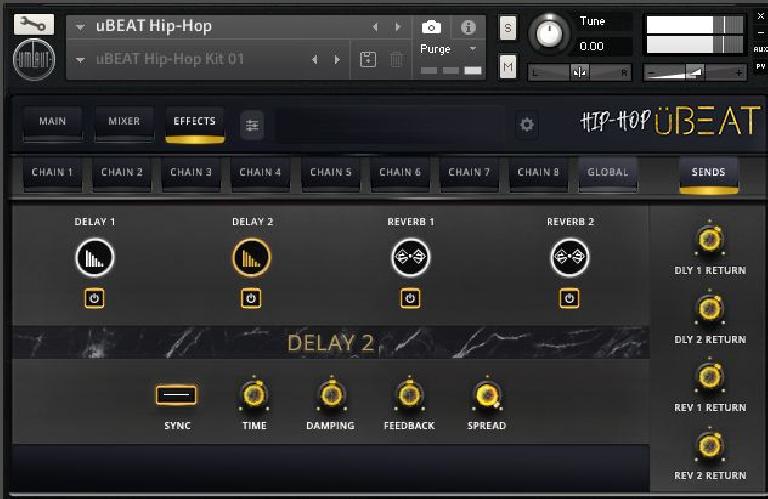 I really was impressed with uBEAT, and intend continuing drumming away with it for some time. It’s got a very current sound that really feels right for what I’m doing, in terms of Electro, and Hip-Hop hybrid sounds of my own. And, it gives you enough individual control over each drum that you can quickly tailor any kit within the collection to suit many sounds like pop, film, EDM, Trance, House, Hip-Hop, Trap, Dubstep, and more.

Pros: A well dialed in collection of kits with effects and players that really make beat making fun and educational, while still giving you a highly modern sound.

Cons: Kontakt-based, meaning you need Kontakt 5, or Kontakt player to use this product.