Amplitube 3 501
Working with Amplitube
Genre: Audio
The course is designed to show you all the ins and outs of Amplitube 3 so that you can become a tone creation wizard. We will guide you through the basic use of the plugin within a DAW followed by some more advanced stylized tone creation examples. We will also throw in some helpful tricks that you would not expect from a guitar modelling plugin.
Skills:
Alexander Adhami
In demand for his uniquely global sound, Alexander has composed music for Harpo Productions, the Food Network Warner Chappell's Non-Stop Music, Universal's Music Group and other media. His music is broadcasted on major networks like ABC, The Food Network, SABC and other European broadcasters.
Watch Free Previews!
View up to 5 free videos from ANY course each day.
Out of free previews? Come back tomorrow to watch some more!
Get A Library Pass!
Watch this course – and ALL macProVideo.com courses – for as long as your pass is active.
Purchase just this course! Watch it anytime, for life.
To download & view offline, use our
NonLinear Educating Player Software.
Overview
Status: Available | Released: Nov 28th, 2011
Amplitube 3 is a virtual guitar amplifier featuring rack & stomp effects, cabinet simulation with multiple amplifier choices and an infinite amount of tone creation possibilities. Designed with great attention to detail, Amplitube 3's amp modelling capability is recognized by Fender, Orange, Ampeg and many other leading amplifier manufacturers due to its accurate tone reproduction using IK Multimedia's third generation DSM™ technology.

If you have used a guitar effects processor before, be prepared to totally rethink the way you create and store your sounds. The course is designed to really harness your tone creation capabilities with useful audio examples. This way, instead of relying on a preset to shape your tone, you will learn to create your sounds from the ground up. We will show you how to combine the Pre-Amp from one brand with an EQ from another. This way, you can choose and build your own custom sound. A simple dry guitar chord played into your computer can now be filtered through Amplitube 3 opening the doors to a venue near you.

Outline
Section 1: Section 1: Amplitube 3
Other courses in this series
What to do next
Embed Video
Embed this video in a blog, forum post, or webpage. 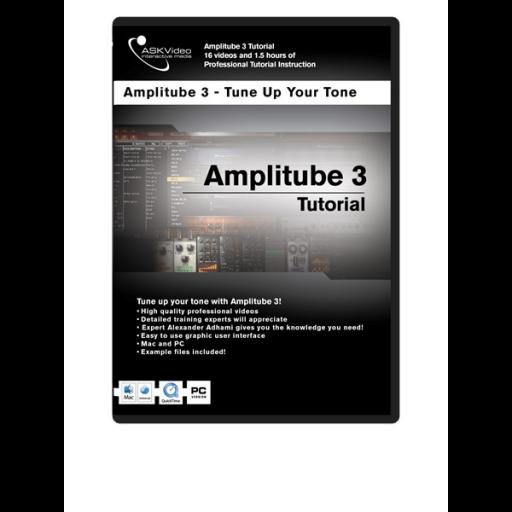