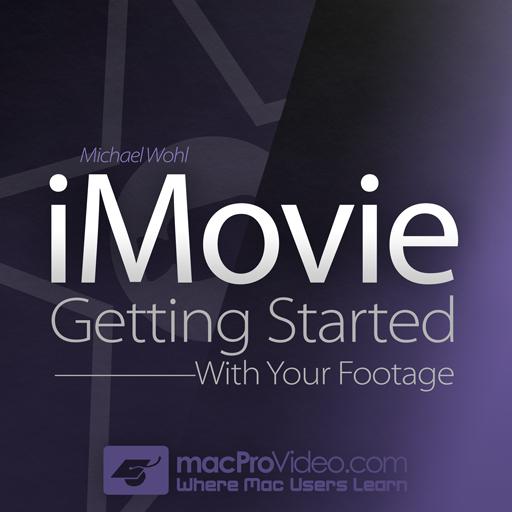 iMovie 101
Getting Started With Your Footage
Genre: Video
“I’ve shot my footage... Now what?" This is the biggest question every video editor asks when using video editing software. This course is designed to guide you through the importing and organizing process to ensure your iMovie clips are brought in, managed and ready to be edited!

Michael Wohl
Back when desktop video editing was just a sparkle in every film editor's eye, Michael was busy creating Final Cut Pro. Learn Final Cut Pro from one of the original designers of this incredible piece of software!
Watch Free Previews!
View up to 5 free videos from ANY course each day.
Out of free previews? Come back tomorrow to watch some more!
Get A Library Pass!
Watch this course – and ALL macProVideo.com courses – for as long as your pass is active.
Purchase just this course! Watch it anytime, for life.
To download & view offline, use our
NonLinear Educating Player Software.
Overview
Status: Available | Released: Oct 23rd, 2013
It’s time to get organized! It's amazing what a little pre-editing clip management will do to keep your video editing process running smoothly! So, before you start up a new iMovie project, get some fundamental knowledge of how to deal with all your footage and content.

This course – by the entertaining and knowledgable Michael Wohl – takes you step-by-step through the processes of importing footage and audio. It then dives into clip and file management to ensure that your project doesn’t get bogged down with extraneous and disorganized content.

From there you get some basic clip sorting, playback, selection and marking techniques that’ll allow you to confidently move your content to the the timeline and begin editing!

By the time you finish this course, you will have a complete understanding of how iMovie deals with all kinds of content and what you can do to keep yourself, your Mac and iMovie organized and running at an optimum pace!
Outline
Section 1: Section 1: Importing Footage
Section 2: Section 2: Importing Files
Section 3: Section 3: Importing Audio
Section 4: Section 4: Managing Libraries & Events
Section 5: Section 5: Working with Clips
Section 6: Section 6: Marking & Selecting
Other courses in this series
What to do next
Embed Video
Embed this video in a blog, forum post, or webpage.