Steve Horelick
Twice Emmy-nominated Steve H is a Logic Pro Master and industry-leading audio producer/performer. You might know him from TV's "Reading Rainbow" ... he scored every episode of that program.
Watch Free Previews!
View up to 5 free videos from ANY course each day.
Out of free previews? Come back tomorrow to watch some more!
Watch this course absolutely free!
Overview
Status: Available | Released: Jul 16th, 2013
Flex Pitch, MIDI FX, Drum Kit Designer, Track Stacks, Retro Synth, new Channel Strips, Mixer and Logic Remote. Need we say more? These are just a few of the big new features that, along with hundreds of workflow enhancements, make this new version of Logic one of the most feature-packed DAWs on the planet.

In this FREE "What's New" course, Steve H and David Earl take you step-by-step through all of the new plugins, instruments and major features. You'll see what the buzz is all about and how these enhancements will take your music to all kinds of new places.

Dive into the MIDI FX that bring advanced MIDI manipulation right to the channel strips. Learn about the Free Logic Remote iPad app and the power of its intelligent, multi-touch second screen, exclusively built for Logic Pro X.

Check out Drummer – Logic's new A.I. humanoid beat creator with all of its multiple personalities and kits. Speaking of kits, bang on the new Drum Kit Designer with its plethora of professionally recorded, multi-track collections of drum kits. Then, explore the new Retro Synth with its easy-to-get-to controls featuring an array of synthesis from analog to wave table.

Logic Pro X is here... and we have all the courses you need. Right here, right now!

Knowledge streamed directly to you brain!
Outline
Section 1: Section 1: What's New in Logic Pro X
Section 2: Section 2: Cool New Production Tools
Other courses in this series
What to do next
Embed Video
Embed this video in a blog, forum post, or webpage. 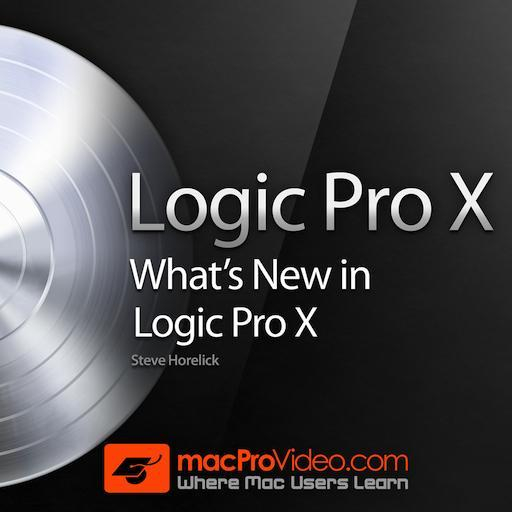