Logic 407
Producing With Folders
Genre: Audio
Did you know that you can record into Logic's folders, edit with folders, mix with folders and even rearrange your tune with folders? You can! ... and David Earl (a.k.a. sflogicninja) shows you all of this and more in his maiden tutorial for macProVideo.com!

David Earl
David Earl is a composer/producer and Logic Studio guru living in the San Francisco Bay Area. You've seen him on YouTube, now watch his work at macProVideo.com!
Watch Free Previews!
View up to 5 free videos from ANY course each day.
Out of free previews? Come back tomorrow to watch some more!
Get A Library Pass!
Watch this course – and ALL macProVideo.com courses – for as long as your pass is active.
Purchase just this course! Watch it anytime, for life.
To download & view offline, use our
NonLinear Educating Player Software.
Overview
Status: Available | Released: Apr 14th, 2011
Folders rock! They are one of Logic's most powerful editing and organization tools, yet, they remain mysterious and mostly misunderstood to a majority of Logic users. Well, the veil of secrecy is now lifted! Enter David Earl with his first Logic tutorial for macProVideo.com.

David knows Logic ... and David knows folders. He uses them extensively in all of his amazing Logic productions. In this insightful tutorial, Producing With Folders, David takes us step by step into Logic's folders, unfolding all of the amazing things that folders can do to enhance your Logic experience.

So whether your Logic projects are straight forward or complex time-sucking, mega-track nightmare projects that need deep work to edit and organize, David Earl shows you how you can enhance your workflow experience by incorporating folders into your Logic production toolbox!
Outline
Section 1: Section 1: Producing with Folders
Other courses in this series
What to do next
Embed Video
Embed this video in a blog, forum post, or webpage. 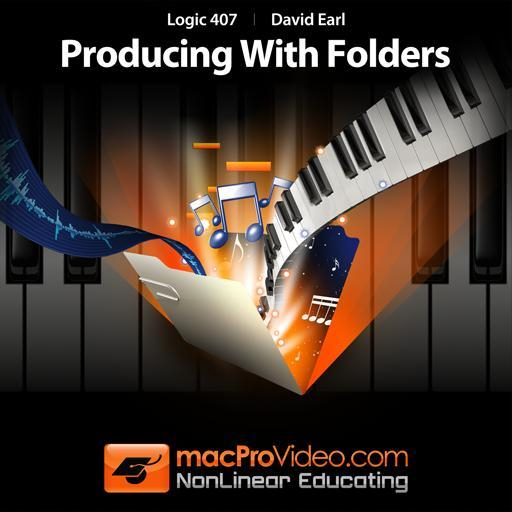