Logic 101
Core Logic
Genre: Audio
Watch as Martin Sitter shows you how to build a song from the ground-up using Logic. This tutorial is produced by Apple's Original Logic Courseware designer!
Skills:

Martin Sitter
Apple's original courseware author for Logic Studio, Soundtrack Pro, & DVD Studio Pro, Martin Sitter is a best-selling technical writer, and the founder of macProVideo.com!
Watch Free Previews!
View up to 5 free videos from ANY course each day.
Out of free previews? Come back tomorrow to watch some more!
Get A Library Pass!
Watch this course – and ALL macProVideo.com courses – for as long as your pass is active.
Purchase just this course! Watch it anytime, for life.
To download & view offline, use our
NonLinear Educating Player Software.
Overview
Status: Available | Released: Aug 11th, 2009
With its all-in-one interface, enhanced editing functions, and low price, Logic Pro (part of Logic Studio) is bound to make waves in the audio editing community. This tutorial program covers important Level 1 aspects of editing, recording, mixing, and outputting songs using this incredible application.

This tutorial is applicable to both Logic Pro and Logic Express. Through the course of this tutorial you will go through the process of building an actual song! You can even download the finished song files and deconstruct, analyze, or remix the final song for yourself.

Chapter 1 begins the exploration of Logic while examining how audio works, starting with the most basic waveform, a sine wave! Through the chapter, you will look closely at how amplitude and frequency combine to make sound. We even jump into Soundtrack Pro for a bit to do some deep analysis of frequency (hey, it's Logic Studio now, so why not?!).

In Chapter 2, you will explore song construction and phrasing by using Apple Loops to begin laying out your song. This chapter will demonstrate how to work with tempo and pitch while time-stretching audio files and apple loops to keep pace with your song. You'll also learn some interesting techniques for changing the look of your arrange window, including using custom colors for Tracks and Regions, as well as creating your own custom Track icons.

Chapters 3 and 4 get into the nitty-gritty of editing MIDI and Audio regions. While these chapters are designed to provide basic information you'll build upon later in the program, so advanced features (including Step Recording MIDI data and creating Folders to group regions) are covered in these chapters.

Chapter 5 takes a close look at the process of bouncing, creating MP3 files, and using key commands. Along the way, you'll learn how to choose bit depths for compressed files, and attach metadata such as band and track names that will show up when the listener opens your songs in iTunes.

In Chapter 6, you'll look closely at the process of recording in Logic. You'll learn how to set record levels, how to do basic, punch, and replace recordings, and even how to cycle record. I also cover multi-take recording and Logic's "Quick Swipe comping" ... some really great features of Logic! I had a lot of fun recording this section, particularly as I used my two star vocalists for certain parts of the tutorial (it's amazing how much vocals can add to a track!)??

Chapter 7 goes over using screensets, and layering instruments to make big, lush sounds for your mixes. In this section you'll take a good look at the Environment and explore how to manage layers and objects in the Environment, as well as how to cable objects together to route signal through different Environment objects. This "first look" at the Environment that is meant to provide a solid foundation you can use for further exploration into the Environment in tutorials such as the Logic 303: Logic TNT.

Chapter 8 begins our exploration of Mixing and DSP effects. This chapter includes tips for using Noise Gates and Logic's Strip Silence feature, and also discusses how to effectively use folders and aliases in your arrangements. You'll also be introduced to the Mixer window, and see how Mix groups and multiple output instruments like Ultrabeat can be used to full advantage in your projects. But that's not all ... the final half of this chapter concentrates on one of Logic's best features - automation! You'll learn how to use realtime and static automation, including automation curves, to create evolving ambiences in your music. 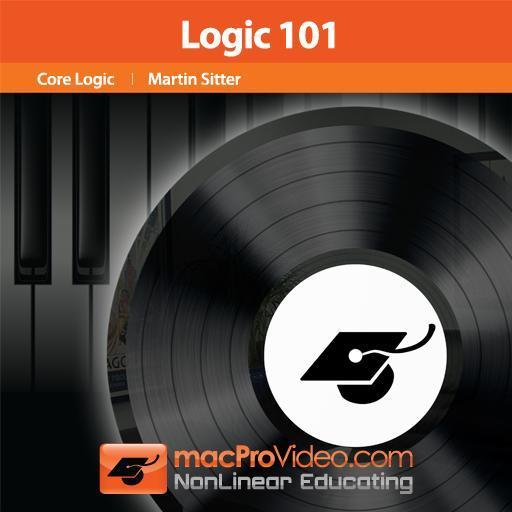