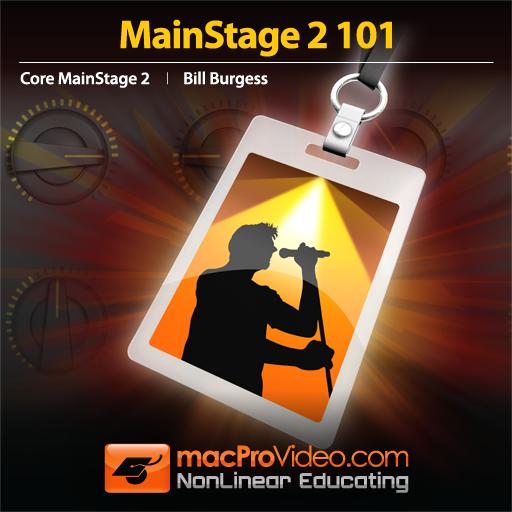 MainStage 2 101
Core MainStage 2
Genre: Audio
MainStage 2 is the live performance tool that ships with Logic Studio. If you're a musician, and particularly a keyboardist, MainStage 2 will become your new secret weapon …
Skills:

Bill Burgess
Bill Burgess is the former Pro Audio Product Marketing Manager and Logic Pro Artist Relations Manager for Apple Inc. He's also a brilliant software educator with long experience teaching audio producers how to make music!
Watch Free Previews!
View up to 5 free videos from ANY course each day.
Out of free previews? Come back tomorrow to watch some more!
Get A Library Pass!
Watch this course – and ALL macProVideo.com courses – for as long as your pass is active.
Purchase just this course! Watch it anytime, for life.
To download & view offline, use our
NonLinear Educating Player Software.
Overview
Status: Available | Released: Oct 28th, 2009
WIth the release of MainStage 2, Apple has blessed all giggling musicians with a new and improved arrow for their live performance quiver. Using MainStage 2, you can now perform with any instrument available in Logic, in any musical style you want … there's no limit to your creativity when you use MainStage 2.

But all that amazing performance power comes with a price - you have to learn MainStage before you can use it. Thankfully, Star NonLinearEducating.com Trainer Bill Burgess has provided us with this comprehensive MainStage 2 tutorial.

In over 5 hours of Tutorial-Videos, you'll get a comprehensive education on all key features of MainStage 2, including how the interface works, how to create your own layouts and templates, creating your own songs to play along with, adding DSP effects to our performance, and more.

Use these tutorials to learn MainStage quickly, and spend your time using MainStage to make music!