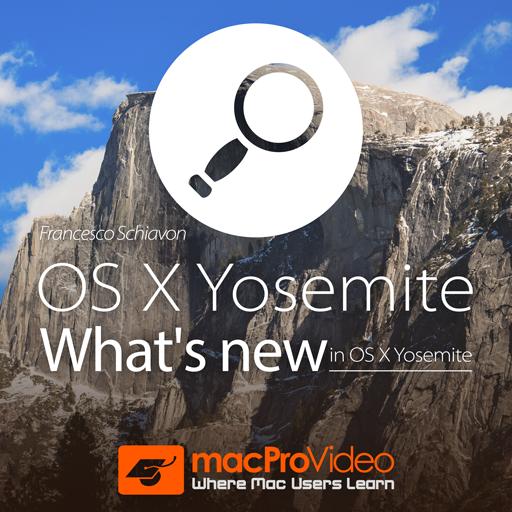 OS X Yosemite 100
What's New in OS X Yosemite
Genre: Productivity
Apple’s Yosemite (pronounced yo-sem-it-tee) is the next step in the inevitable confluence of features, of OS X and iOS software. Get a mountaintop view of some of Yosemite’s dramatic landscapes in this FREE course by Francesco Schiavon.

Francesco Schiavon
Francesco Schiavon is a recognized expert in the topic of digital media deployment for web and optical disc. A dedicated educator, Francesco has spent the last decade teaching in some of Canada's leading multimedia schools.
Watch Free Previews!
View up to 5 free videos from ANY course each day.
Out of free previews? Come back tomorrow to watch some more!
Watch this course absolutely free!
Overview
Status: Available | Released: Oct 16th, 2014
This FREE introductory course, by our in-house Apple specialist Francesco Schiavon, reveals and explains some of the coolest new features in Apple’s latest version of OS X: Yosemite. Check out the interface changes, the expanded features in the Notification Center, Spotlight and iCloud Drive.

Next, you dive into an exploratory look at “What’s New” in Mail, Safari and Messages. This is followed by a quick look at Apple’s Continuity, Handoff and powerful new cellular integration.

Once you get a glimpse of what Apple’s up to with this new version of OS X, be sure to check out our panoramic lineup of in-depth Yosemite courses that are designed to bring you completely up to speed! So join Francesco and start exploring all the features packed into this powerful, new operating system!