Logic 8 205
Synthesis With Sculpture
Genre: Audio
Sculpture is one of the most amazing synthesizers ever built, and it comes with Logic Pro!
Skills:

Steve Horelick
Twice Emmy-nominated Steve H is a Logic Pro Master and industry-leading audio producer/performer. You might know him from TV's "Reading Rainbow" ... he scored every episode of that program.
Watch Free Previews!
View up to 5 free videos from ANY course each day.
Out of free previews? Come back tomorrow to watch some more!
Get A Library Pass!
Watch this course – and ALL macProVideo.com courses – for as long as your pass is active.
Purchase just this course! Watch it anytime, for life.
To download & view offline, use our
NonLinear Educating Player Software.
Overview
Status: Available | Released: Jun 19th, 2006
If you are a Logic user, but you have not gotten into Sculpture, you're missing a phat instrument. Simply stated, Sculpture sounds amazing! It's a powerful synth, but at first glance it is intimidating!

Thankfully, we have Steve Horelick, a master synthesist, here to show you the way! With his trusty sidekick Igor in tow, Steve strips Sculpture to it's basics before building it back up, step by step, to show you how to synthesize rich and musical timbres that have never been heard before.

Sculpture is certainly a synthesist's dream tool. With a depth of programing that could shame any traditional synthesizer and the ability to save and recall your custom patches at any time, Sculpture will become one of the most important tools in your audio arsenal. Steve shows you how to model wood sounds, bells and metallic hits, smooth strings, and so much more ... if you avoid presets like the plague and insist upon uniqueness in your sounds, this is a must watch tutorial program.

Steve's best-selling tutorials on Sound and Logic's Effects Plugins are a main-stay of our tutorials here at macProVideo.com ... you'll be please to know he brings all of his talents, and also his assistant Igor, to this new tutorial program! In our opinion, this is the best one yet!
Outline
Section 1: Sculpture Basics
Section 2: Instrument Workshop #1
Section 3: Modulation Generators
Section 4: Instrument Workshop #2
Section 5: Control Envelopes
Section 6: Morphing Sounds
Other courses in this series
What to do next
Embed Video
Embed this video in a blog, forum post, or webpage. 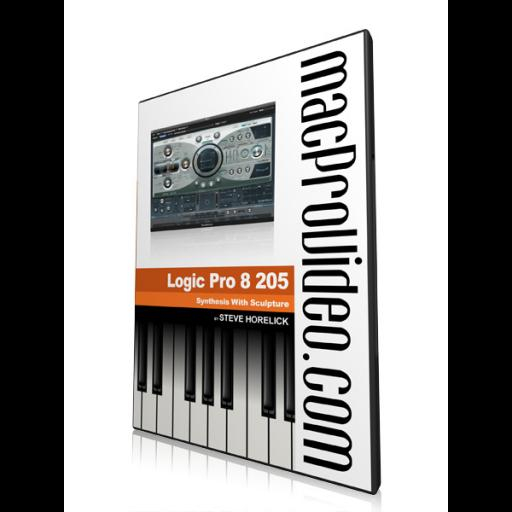