Logic 7 103
S O U N D (and why it sounds that way)
Genre: Audio
This classic title is, perhaps, the best course on the physics of sound ever created! From detailed descriptions of sound synthesis, to intriguing discussions of audio perception ... this program is guaranteed to bring that 'A-Ha!' moment to anyone interested in sound!
Skills:

Steve Horelick
Twice Emmy-nominated Steve H is a Logic Pro Master and industry-leading audio producer/performer. You might know him from TV's "Reading Rainbow" ... he scored every episode of that program.
Watch Free Previews!
View up to 5 free videos from ANY course each day.
Out of free previews? Come back tomorrow to watch some more!
Get A Library Pass!
Watch this course – and ALL macProVideo.com courses – for as long as your pass is active.
Purchase just this course! Watch it anytime, for life.
To download & view offline, use our
NonLinear Educating Player Software.
Overview
Status: Available
What makes sound, sound?

This tutorial program is a master-stroke of video training. It is just as entertaining as it is informative. Through a careful blend of humor and pointed discussion, Steve introduces the theory behind how sound is made.

Topics such as frequency, amplitude, and how they combine to make sound are explored through an expert's ear as Steve shows you how to build sound waves through synthesis.

Next, Steve strips those waves down while demonstrating how filters shape frequencies. You'll hear the difference between cut and pass filtering, how to EQ, and when to phase vs. flange.

This is a deep trip into the fundamentals of sound, and it's required viewing for anyone looking to utilize Logic ... or any other audio program!
Outline
Section 1: Section 1: Part 1
Section 2: Section 2: Part 2
Other courses in this series
What to do next
Embed Video
Embed this video in a blog, forum post, or webpage. 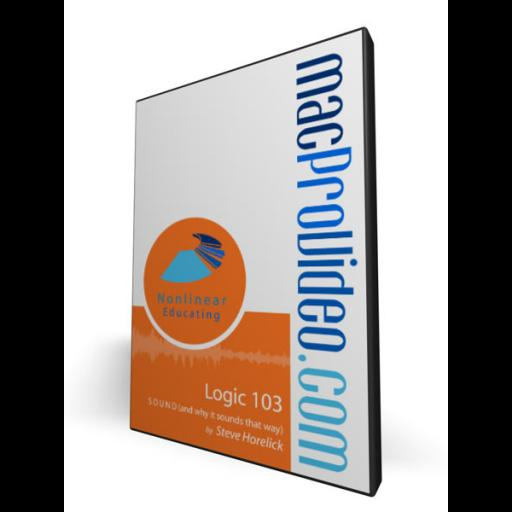