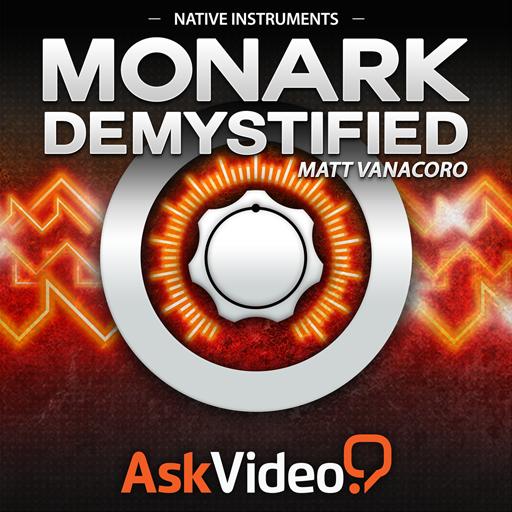 Native Instruments 220
Monark Demystified
Genre: Audio
With its warm filters and unique analog characteristics, the Minimoog is on more classic tracks than any other synth. Monark, from Native Instruments, captures and expands upon the Minimoog's essence. Learn all about Monark right here, right now!

Matt Vanacoro
Matt Vanacoro is an A-List New York City based performer, composer and educator with deep experience in all aspects of production, synthesis, electronic keyboards and music technology...
Watch Free Previews!
View up to 5 free videos from ANY course each day.
Out of free previews? Come back tomorrow to watch some more!
Get A Library Pass!
Watch this course – and ALL macProVideo.com courses – for as long as your pass is active.
Purchase just this course! Watch it anytime, for life.
To download & view offline, use our
NonLinear Educating Player Software.
Overview
Status: Available | Released: Jun 6th, 2013
Monark is, perhaps, one of the best classic analog synth emulations we have ever heard. Harnessing the power of digital software design to accurately capture the essence of discrete analog circuitry, with all of its quirks and personality, is very difficult. Native Instruments was up to the task and has come up with a very powerful and authentic-sounding instrument.

In this course, presenter Matt Vanacoro takes you through every virtual knob and control. He explains the signal routing and shows you all the hidden functionality that makes this synth sing.

You learn about Monark's oscillators, modulators, filters and amplifiers and how they all work together in typical analog fashion to produce that classic sound. You also get an explanation of Monark's seriously cool back panel where the true analog magic happens. Here is where the Native Instrument design team has gone the extra distance. The back panel lets you add ultimate realism to your sound design by controlling the classic analog drift, tracking and distortion. WOW!

So dig into this deceptively complex synth with the awesome Matt Vanacoro as he shows you how to harness that analog warmth and add some heat to your productions!
Outline
Section 1: Section 1: Getting Ready
Section 2: Section 2: Exploring Monark
Section 3: Section 3: Making Sounds
Other courses in this series
What to do next
Embed Video
Embed this video in a blog, forum post, or webpage.