Live 9 103
MIDI Recording and Effects
Genre: Audio
Bill Burgess is one of the coolest trainers we know. That's why we said YES when he offered to design this amazing course on MIDI in Ableton Live 9. Bill is an extraordinary teacher who delivers insightful nuggets of music gold. Pay attention and learn!

Bill Burgess
Bill Burgess is the former Pro Audio Product Marketing Manager and Logic Pro Artist Relations Manager for Apple Inc. He's also a brilliant software educator with long experience teaching audio producers how to make music!
Watch Free Previews!
View up to 5 free videos from ANY course each day.
Out of free previews? Come back tomorrow to watch some more!
Get A Library Pass!
Watch this course – and ALL macProVideo.com courses – for as long as your pass is active.
Purchase just this course! Watch it anytime, for life.
To download & view offline, use our
NonLinear Educating Player Software.
Overview
Status: Available | Released: May 11th, 2013
MIDI, in Ableton Live 9, is the essential life-force of of this deep DAW. It's what makes Live tick and Bill Burgess has filled this course with tons of MIDI knowledge that is so insightful that it may change the way you compose, record and perform with Live.

This course starts off with one of the most intriguing looks at MIDI and the history of MIDI that has ever been created. This tutorial alone is worth the price of the course!

From there BIll jumps right into MIDI recording, overdubbing and automation. With the basics out on the table, you start getting into the grit of MIDI editing. Bill lays it all out, delivering a buffet of very cool techniques.

Next up, you get a some very hip MIDI tips custom-made for songwriters. These are designed to help you get you ideas into Live fast – without getting burdened with extraneous diversions!

From there, you're off to MIDI FX where you get inside knowledge on all the very innovative transformations you can hookup to supercharge, arpeggiate, randomize and destroy any MIDI data in sight! Bill completes the adventure with a tasty little section on controllers, outboard synths and iOS integration.

So kick off your shoes and spend some time with the entertaining Bill Burgess and learn a ton about MIDI in Ableton Live at the same time!
Outline
Section 1: Section 1: Why MIDI is important
Section 2: Section 2: Recording MIDI
Section 3: Section 3: Editing MIDI
Section 4: Section 4: MIDI Songwriting Aids
Section 5: Section 5: The Power of MIDI Effects
Section 6: Section 6: Live with Controllers, Outboard Synths & iPads
Section 7: Section 7: Remote Scripts
Other courses in this series
What to do next
Embed Video
Embed this video in a blog, forum post, or webpage. 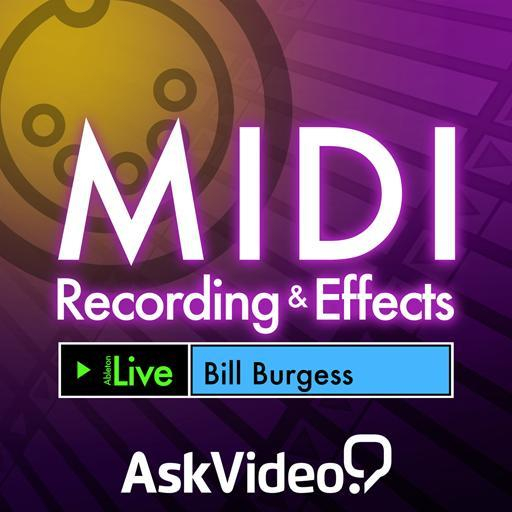