Bill Burgess
Bill Burgess is the former Pro Audio Product Marketing Manager and Logic Pro Artist Relations Manager for Apple Inc. He's also a brilliant software educator with long experience teaching audio producers how to make music!
Watch Free Previews!
View up to 5 free videos from ANY course each day.
Out of free previews? Come back tomorrow to watch some more!
Get A Library Pass!
Watch this course – and ALL macProVideo.com courses – for as long as your pass is active.
Purchase just this course! Watch it anytime, for life.
To download & view offline, use our
NonLinear Educating Player Software.
Overview
Status: Available | Released: Oct 21st, 2014
When we think of Logic, we don't usually think of it as a hacker's playground. But deep inside of this multidimensional program lie some pretty wicked tools that can generate crazy results... especially with former Apple Logic team member Bill Burgess at the controls. So, if you're a Logic Pro X user and you're looking for new ways generate loops, beats and sonic inspiration, this course will open your eyes and replenish your imagination!

It starts with Drummer. There's more to this android beat-basher than meets the eye and Bill takes our robotic friend to musical places his Apple inventors never imagined! Then there's good old Ultrabeat. Deep within this drum machine lie some powerful mashup tools that allow it to randomly chop up any audio track into tasty rhythmic masterpieces.

Up next is a section on creative comping. Not just comping similar tracks but tracks that just don't seem like they should ever go together! Bill shows you how to fuse these strange elements into the most unique and unusual loopable clips.

But there's lots more to this collection of tutorials: Bill Burgess is masterful drummer and drum programmer who generously shares his time-proven programming techniques all along the way. So get deep into Logic's subconscious -without even going into the environment- in this eye-opening course delivered by the always-entertaining Bill Burgess!
Outline
Section 1: Section 1: Drummer Tracks
Section 2: Section 2: Linear Drum Grooves
Section 3: Section 3: Fooling Drummer
Section 4: Section 4: Ultrabeat
Section 5: Section 5: The Step Editor
Section 6: Section 6: Comping Beats
Section 7: Section 7: Drum-Centric Audio Effects
Other courses in this series
What to do next
Embed Video
Embed this video in a blog, forum post, or webpage. 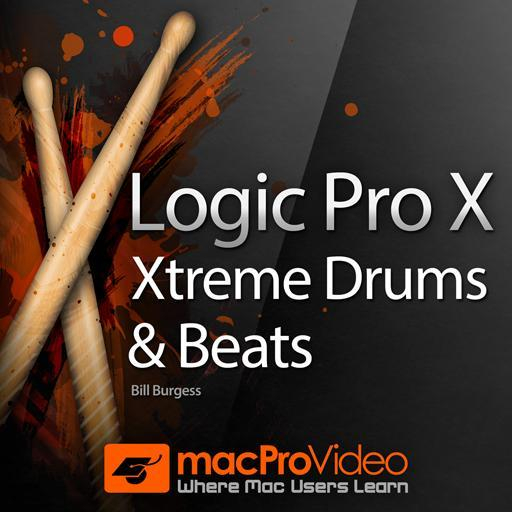